Learning from your mistakes. 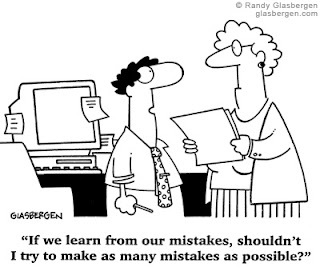 Getting into a frenzied panic after bad news and thinking that I will no longer have spending cash in 6 months time to get what I want, and then binge buy my way through Ebay, Marktplaats and FB groups......not the right way. (Though in my head it is quite logical. (damn you, head))

So, what have I done? I had been merrily selling stuff and purchasing the odd bits of scenery by scouring the deepest recesses of the Interwebz and comparing offers, shipping costs and conversion rates to get the most bang for my buck (and you'd be amazed at the huge differences sometimes) and this was going pretty well. Sales were going well and more money was flowing in then out. Good business, clearing the attic and a happy wife.

Then 2 things happend. The deal/trade with Piers, bad news on the job and knee fronts, and a sale. (ok, so it's 3 things)

* For the deal with Piers I need stuff to turn into wrecks. I need to buy stuff.
* Bad news makes me overeat and/or overspend.
* Sales.....I kinda stopped going "Wow, a sale! Buy stuff!" as it is pretty obvious to most people most (not all) shops routinely have sales. Most are in the 10-20% off range, nicely covering shipping costs most of the time. Buying directly from producer can help too ( and they have sales too, at times)

So, for the deal with Piers I need to make wrecks. For that I need cheap, unmade plastic kits as I find those the easiest to work with. Some kits work better then others though. Luckily, my local FB group has 2 regular sellers that occasionally list multiple 1/72 or 1/76 boxes at once in the 5-7 euro range.
Splurge session 1 - buying stuff to make wrecks.

Bad news makes me spend money due to irrational fears. There, I'm human. In this case my fear is no longer having money for the hobby so stock up now! Wargamer meets Survivalist kind of thing I guess. At least my head was clear enough to check quite a few stores to get the best deal per kit(s) purchased. Splurge session 2 - buying stuff for plans for expanding not even built yet armies.

Sales. In December lots of shops have sales. For some of these shops I make lists of needs, so that I can buy them when they have a sale. Splurge session 3 - well, barely, as I just bought from one producer.

In 2 weeks time I spent a bit over 250 euros on 48 boxed kits that will build into 58 vehicles (If I would build and complete 1 vehicle every 2 weeks I'd be busy with that lot for over 2 years!) using nothing but sales and 2nd hand boxes.

Yeah.....not smart. Especially as the model kit sale I'm having right now is going really, really slow, but I will spend a day listing everything on Marktplaats to get more exposure so who knows. December is always a month I hardly do any sales in. Maybe January will be better.

Anyhow....Gunbird, what on earth did you spend so much money on? I'm glad you asked. 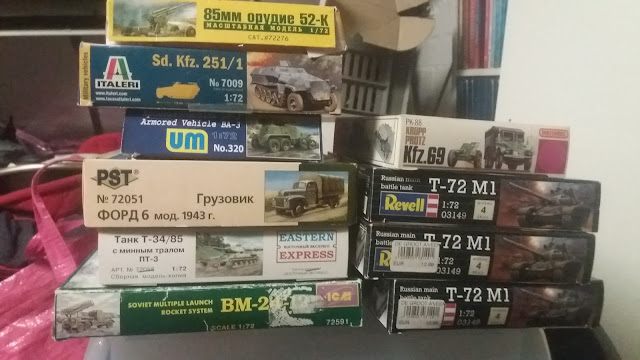 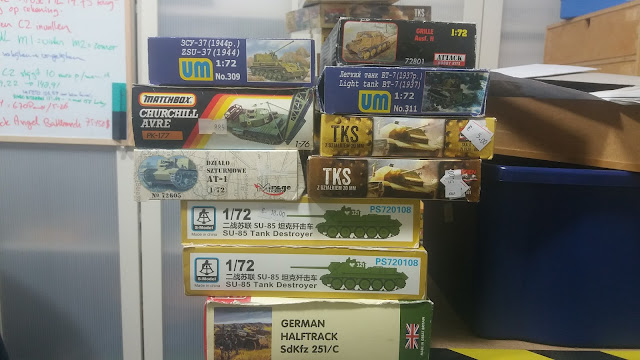 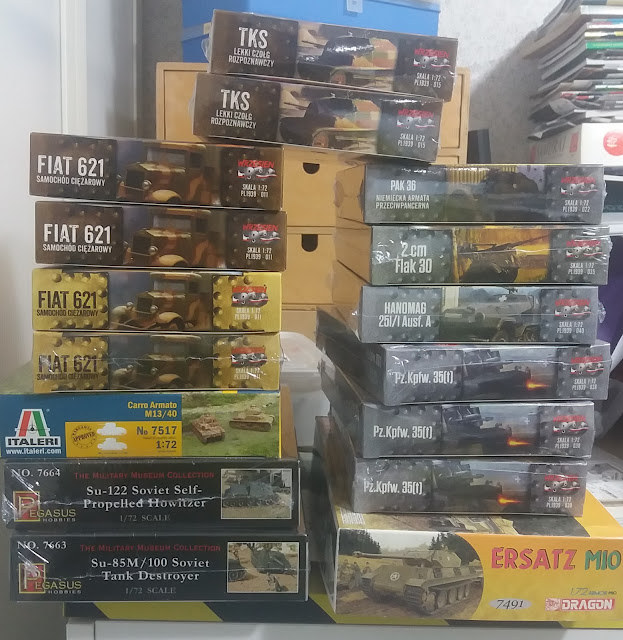 First to Fight....2x TKS-MG (Poles - Cockroach scenario), 4x Fiat 621 (2 for wrecks, 2 for Germans), PaK36 (2 in a box - Germans), 2cm FlaK30 (1 for Early War, 1 for Late War,), 251/1A (to convert for a Mid/Late War German HQ vehicle with a map on the front), 3x Pz Kpfw 35(t) (Early War German, need 2 for the Cockroach scenario but a standard platoon for Blitzkrieg is 3 so I went with that), and by far the most expensive kit of them all, the most I've spent on a single tank to date, a Dragon Ersatz M10. With expensive I don't mean the current Ebay prices but still more then what I usually pay for a kit. I always wanted one for the Ardennes, that and a converted Stug for which the PSC one will do nicely. No snow crap for my bases as I'll use my normal Germans for the rest. Italeri - fast build M13/40 for Afrika (no idea what army though), Pegasus Models fast build Su-122 and Su-85M/100. The first for my Mid War Russians, the latter to be built as Su-100's

Still in transit is another box from a second hand seller. PST KV-1C (wreck or Russian) PST KV-2 German (German army for shits and giggles in Late War colours) Italeri M163 Vulcan (came free with the lot, I have no armies that use this I think...possible trade fodder), Italeri DUKW (no use for it atm, could be trade fodder or resupply vehicle for D-Day) Mirage 7tp - 2 turret and single turret version (both as wrecks) UM Su-76 (Russian Army) Roden 233 (wreck), Academy Ground vehicle set (wreck, wreck, wreck), Airfix Matilda (dug in bunker for Afrika) PST KV-2 (Russian or wreck) PST KV-1E (Russian or wreck)

The stuff that dreams are made of? Perhaps. If I was to spend 3 weeks per vehicle building, basing and painting it, this lot will keep me busy for a good 3 years. Was it smart to spend so much money in such a short period? No, it wasn't, tbh. Am I now super duper evil? Nah, just human. I made a small mistake, I now have (most of) the stuff I wanted so I can get on with it.

My next move will be to put the new purchases up in the attic, and bring the ones needed for the 2 scenario's downstairs, put them in boxes and just get on with it. I'll probaly will start with the Polish scenario first, building 4 Polish tanks (though I only need 3) and 4 German tanks (though again I only need 3, and the Panzer IV B conversion of the PSC modelwill take up some time)