Every man needs a shed - part 2

I managed to pick up a blue Bruynzeel cabinet and 2 white cabinets from Ikea. I had to pick up a rail for those at Ikea after asking them what I would need..... but I got the cabinets for really, really cheap. 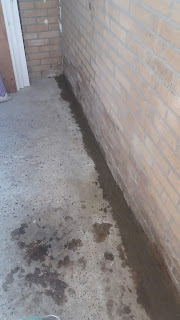 Both sides of the shed had the sand and cement-something mix removed....on the garden end it was nothing but damp, black soil.  Dug it all out and had to use 50kgs of cement mix to fill it all in. Street side dried in 3 days, garden side nearly a week. 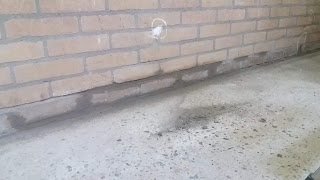 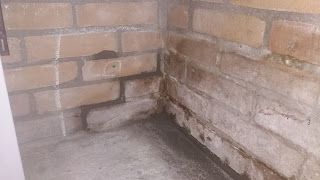 Inside and outside of the shed are sections of cement missing from between the bricks, so I cut and removed all of the loose sections with a chisel and regrouted those. Not that hard, just labour intensive.

I managed to score a big pot of wall paint at 50% off and painted the walls with that. The promised 55m2 meters of paint covered the 4 walls with 1 coat. All 22m2s of it.....so bought another, larger tub on sale and did the second layer with that. The remainder will be used in the house to repaint a bare brick wall and the red wall in our bedroom. 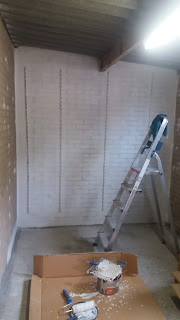 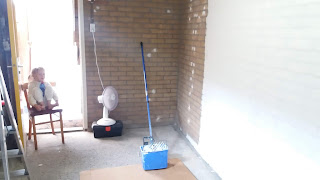 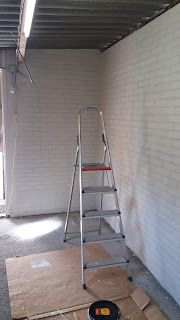 After the 2nd coat on 3 of the walls had dried, it was time to place the first cabinet. And find out the wall leans to the left, and the cabiet to the right. But that was easily sorted. The cabinet, not the wall! 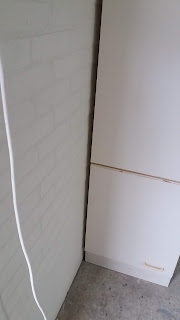 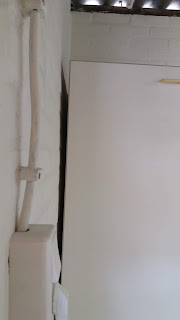 I put everything in the location I had planned to put stuff. 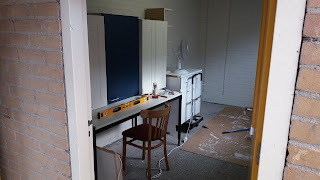 Due to the apalling lack of ventilation a fan really is a must, so this fan will get a fixed place....somewhere. 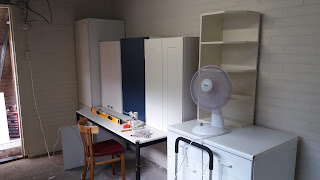 1st coat on the garden wall. I'm really worried this will not stick properly, but we will see. 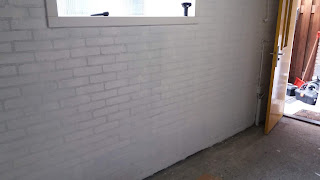 Something I picked up from previous jobs, certain items stored in a fixed location can easily damage the walls (in this case our garden seats) so wooden planks protect it. Whitewashed ones were on sale so I picked up 2x 250 cm's....I'll be returning one next week for a 10 euro refund. 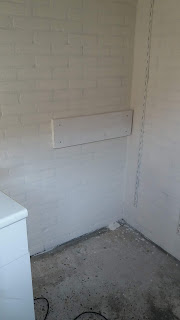 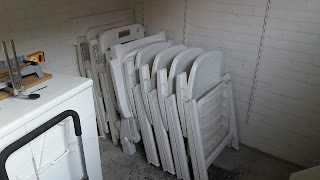 My buddy Sjors had planned to help out, but due to a calendar mix up he could not make it. I'm not strong enough, and lack 4 arms, to hold up a cabinet and mark it off for drilling, but I do have a few functioning braincells. In come 2 crates and 1 plank to raise everything to just under 50cm's from the table top. With a level and some metal washers I just lined up cabinet number 1..... and found out the rail Ikea had reccomended me DOES NOT FIT THIS RANGE! Dammit. Well, I had picked up some heavy duty bolts just in case so just bolted it in place. This baby ain't moving anytime soon. 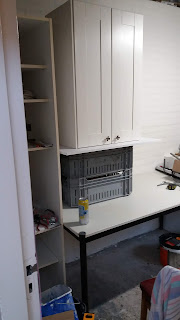 Did the same with the second one. Easy peasy by now. 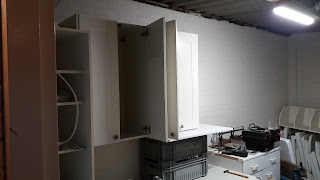 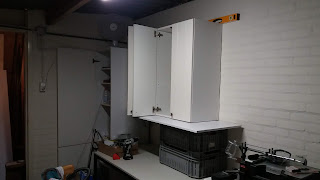 Testfitted the open .... plank thingy. Don't like it. I prefer to have everything behind doors to keep the dirt off. I will try and sell it for a few euros or donate it to Goodwill 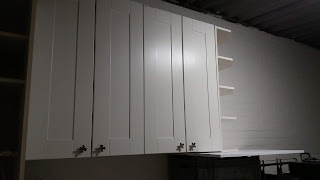 Blew a large part of the budget on stuff for the wiring and a LED light to save on power costs. Bolts, connectors etc I always buy new. Never ever skimp on that kind of stuff. 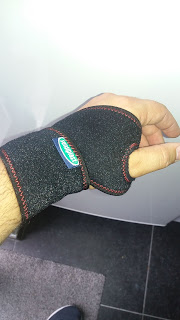 The day after my body copped out. Went to the doc after a few days of increasing severe pain in my hands, wrists and lower arms. Turns out I fucked up and worked too hard and too fast (for what my body can handle). It has been almost 3 years now since the accident and I still have the stamina of a 65 year old (according to my fitness app) even with regular workouts and going around town by bike and foot. Dammit.


So now I have a matching pair of these to support my wrists plus a extra dose of painkillers for the reccomended next 2 weeks of prescribed rest.


I will not let the time go to waste. I can use the time to sort through the boxes of gear and get rid of everything broken or items I have too many of. We can then sell the big storage boxes and pick up a few cheap smaller ones that fit the cabinets. Also take the time to clean and oil all of my gear, and see wat needs replacing. My jigsaw definately is on its last legs and is due for a replacement. I also need to hunt for another set of cabinets to complete th set, as the blue one will be hung next to the backdoor for our recycling area. If I take it very easy I should be able get that done tomorrow as I already cleared the area and just need to drill a few holes for the support to hang the cabinet from. And this one is pretty light compared to the others.

I doubt I will get much hobby time in. Can't hold a knife or file for more than a few minutes and my finew motorskills are pretty shot. Does not stop me from trying though :)