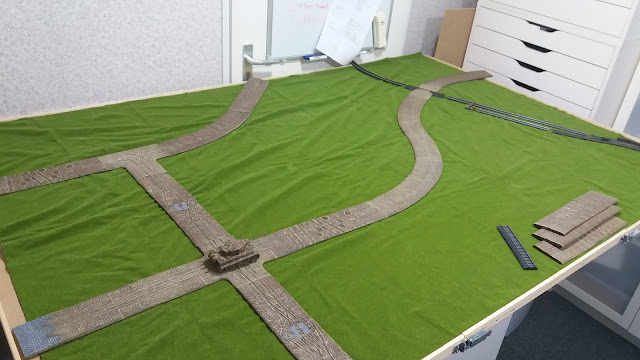 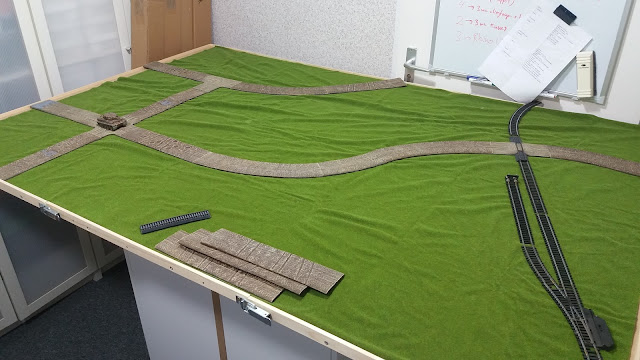 I could not get the GW mat to lie straight on the table, no matter how much I pulled on any side. And then I found out it's A. Shorter then the full lenght of the table and B. Cut by someone like me as it's not even straight either, one end is noticable wider then the other. Final nail in the coffin is that it is very, very green......pooltable green. So, I'll box it up again and put it back for sale this week. 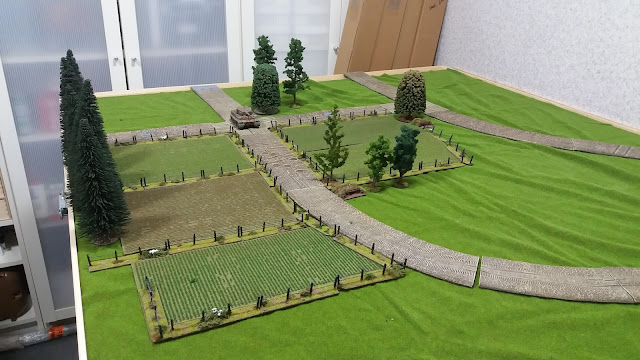 I grabbed some boxes of scenery to see if I could tone it down a bit. Well, if I cover everything with fields etc, sure, but then why bother with a mat in the first place?

Roads are frigging perfect though :) 3 boxes suffices for a 6x4 table, no problem. When Kim asked me if I was happy now, I told her yes, but there was much work to do. I need to double or triple my fences (what you see there is 2 metres of fence), I have more then enough fields, I need to rebase my trees and repair many of the old railway ones that have completely fallen apart flock wise, and I told her I would like to look at Crisis to buy another box of crossroads and a box of cobblestone roads.

Which made her really, really mad.

She told me in no uncertain terms that I was spending too much money on the hobby, that every room in the house was being invaded by the stuff, and that in this rate the attic would never be cleared of stuff. This was countered by me, as the money I've spent recently comes purely from selling unwanted wargamesstuff, that in the past 3 months I have removed all my wargames stuff (including books etc) and consolidated it in the hobby room and attic. And that I need a clean hobbyroom before I can get sorting here, box by box.

Of course, I have this nasty trait I learned from my dad. In an argument, I raise my voice. As soon as it reaches the yelling-stage, Kim just walks away. Thx dad.

After an hour or so (actually, Kim just told me it was a mere 10 minutes!), she came back and we had a proper discussion. Today, we had our councellor over, we discussed it as mature adults, and came to conlusion we needed a goal for the attic. Not the "we'll change it to a master bedroom when the kids want their own rooms in the future" cause that is way too long term, but a short term one. So we chose to clear the attic as much as possible to give Kim a place to put up her easle and start painting again as that is good therapy too. She was all smiles when we planned that I'll be spending a couple of afternoons getting everything neatly stacked, prep the cupboard n the back and stack all my unmade kits there. Easy to see what I have, easy to see what I don't need and can be sold.

Then it's time for the semi monthly "Am I doing the right thing here?" worries. With 20mm claiming back it's (rightful) place in the limelight, I also realise I can't do everything I'd like to do, as properly as I want to do it. As I said to Modhail tonight, it's a bit pointless to paint stuff that might get on the table maybe once a year, while you'd be better off focussing on stuff that could get on the table every week or so. I'm also sick and tired of changing my bloody mind ever so often, and continually falling for the "Ooh! Shiney!" curse. One example of that being 3mm, though I don't mean the aircraft, but the land component. I've sofar bought 25 packs of tanks and assorted vehicles, made casts of loads and painted wrecks (cause I simply can't stop painting wrecks) and then everything stops. Created the 3mm Stalingrad, and thats now on hold again after spending favours and money, and it's not likely to go anywhere soon.

How likely am I to enjoy painting, build forces and game with them? Not a whole lot for most of them tbh.

Shitty focus, no other local players for most of what I do, having plenty other of stuff to worry about before I'm actually able to enjoy painting or even converting. So, what to do?

Well, in the past I've been pretty well occupied with painting for meetings in Ireland. Paint X amount of stuff in Y amount of time. As you don't have that here, I have to think about why I paint. Well, for funsies mostly, I love one offs, wrecks etc. But how  little bit more focus? Well, if I could just find the bleeding Battlegroup books I've stashed somewhere I could make 500 points lists for Early, Mid and Late and get those done. The repeat for Soviets for the entire war and Brits for Overlord. It should not be as difficult (or expensive) as it sounds as certain (infantry) units can be recycled from period to period and I'm primarily want to focus on 500 points lists for now. Another potential way to focus is just to go after the scenario's in the books and build the forces for that. Or, even easier and more basic, is to just pump out infantry units with full support choices

Mind you, I'm only talking about 20mm here.

For the 28's I'm dying to play Frostgrave, but I'm sort of demanding of myself to get a band painted up first. For TNT, the scenery needs doing for Poldercon. Necromunda, Mordheim, Inquisitor? They can wait, I'm in no hurry to get that started. Pulp Alley.....I really can't find any takers here for it, lovely as the game is, so I'm not comitting to that.

So the plan for now is:
-clear the attic
-find the Battlegroup books, make the lists for 500 points OR paint for scenarios OR basic infantry cores for each army
-paint the TNT scenery in a quick but decent fashion
-paint a Frostgrave warband

And cut off the rest. Disband what I have in 3mm ground, but keep some as targets, SAM's and AAA. Sell the 15mm sci-fi stuff. Continue to clear out boxes, list stuff and fill up that Paypal for scenery or miniatures you can actually use for any of the projects that have a fighting chance.

Above all, stop wasting time behind the bloody PC. 10 more days till I'm 40, and Kim has been kind enough to buy the 1 present I want - a minitower with USB port and DAB+. I've already got tons of MP3's ready for it, and I will add as many gaming related podcasts as I can to the list. Then the PC can stay turned off, and I can just sit there not being distracted by the forums, youtube, pings, peeps and whatnots! 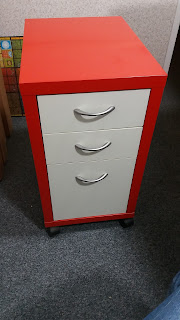 After clearing out the tobacco from the inside and a bloodsmear across the front it's now my new moveable airbrush cabinet. Compressor in the lower tray, airbrush, tools and what not in the top tray and all my air paints in the middle drawer. I've got the Warbases paint rack in there now but it is not a very good fit with wasted space in the back and side, Fortunately, I only own only 37 Vallejo AIr paints (but that is bound to increase in the future) and they fit in the rack, so no need to get a custom made one anytime soon. Since it has wheels I can just slide it underneath the painting table. Bargain price too, and local pick up.

Final word. I still have not put up the shelving. I told Kim today that I really want to, but I don't want to bother her too much or ask her to help me as she has plenty on her mind now. I'll put the shelnes on hold till I have finished the attic. Also, the wall behind me will only have 1 shelf going all across the wall , just above the door. That is enough space for 8 more Pappis boxes and by God, if that is not enough storage for the coming years then I don't know what else. The area on the back wall between the light switch and the Billy cabinets (with the door open) is space 100 cm's tall and 40 cm's wide.
What I would like is to enquire with a gentleman who lives in the next village who makes custom display cases for all sorts of models and toys, in every imaginable size, width and depth. See what the possibilities are, the costs etc.  To have a place to display 3mm aircraft, 20mm tanks and 28mm infantry. And to show offf for a bit. I've been hiding my stuff for years now, it's a bout time they get a big of stage time. But this special item is my goal for when the attic is done, I've found a new job, and the room is as good as it is going to get.