Hive Fleet Kraken spotted! Yes, that one, with 28mm models. On my very table.

After being asked to get a Killteam ready, and having painted some (unsuccesful) tests on some old 2nd hand Genestealers, I ended up on the Hive Fleet Kraken paintscheme.


As I am rusty as fuck painting 28mm models, and I would have to paint a fair few of these, I found a nice tutorial, and with wat paint I have for them, all I needed to order was a extra bottle of Seraphim Sepia was as mine was running low. Ferry (Crayne) gave me few army lists so I have a guide of what to build, so here I go. Nothing earthshattering painting wise, but I do try and be as neat as possible as my hands will let me. 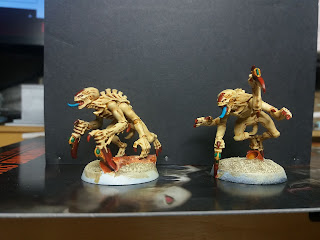 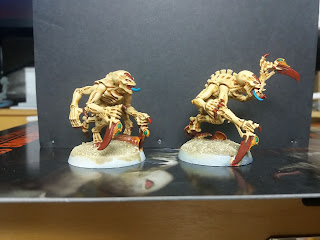 My first 2 normal Genestealers with Scything Talons and Toxin Sacs. All the hard and stabby bity bits will be red, Toxic stuff will be Green with an orange wash so visually they are easy to reognise. All blue tongues cause hey, I like animals with bright blue tongues. Need to trim the base, varnish them x2 and tuft/debris them, but I will do that in one go when I have more done.

Also started up basing the large bag of ....whatever the heck they are, spore puffers, I dunno, and painting them. Say hello to 6 orders of Spaghetti and red sauce! 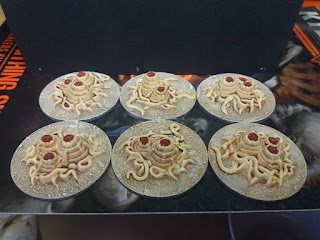 Just for use as markers I guess? Never played Killteam, so... I have 6 more of them in the pipeline, and as soon as I can find a base for it, I will base the big gaping ...mouth? as well.  And also started basing some of the spore mines cause why not. 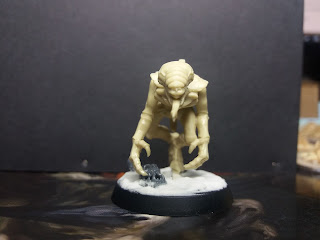 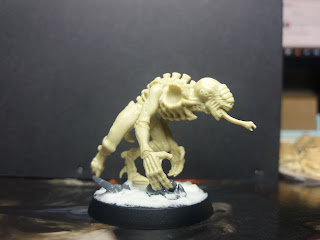 Little bit of work done on GS No3, who is getting the same loadout, but with Extended Carapache. As I really don't like just adding the silly looking plastic plates on his shoulders and calling him done, I want to put some Greenstuff to work for him/her/it.  Also gave it a second contactpoint to the ground....I'm sure he looks all fine and danky raised up on a toe, but I prefer to have my nids survive trips to where I game and not break off at the ankle. Then shave his tongue down, and extend the plates on his head as well and I'd like to give hm the small pointy rhino horn looking thing on his snout as well. I see his Extended Carapache as extra armour so his arms might get some as well. He could be a one off, who knows. I hear the Extended Carapache does not work all that well with Genestealers but I at least want to build and paint one.

So yeah, me painting 28mm stuff again. Who knew :)

Paintrecipe (just in case I lose my notes)