7th place and a windy review

First off, thx for the warm welcome back guys, I really appreciate it and the wife loved the attention you have for the kids. They are still quite the handfull (and will be for some time to come) but we are managing, and tonight the wife told me to get some hobbytime, so I dutifully did just that.

The red and white cell tower from the last post managed to bag 7th place on the Guild, earning me a shiney ribbon for participating  plus I was the randomly selected number (7) that could grab something from the prizepot the Guild have, with kits, books etc.  I chose a PSC Stug III sprue (one can never have enough Stug's) so I have another to experiment on with adding concrete to it.

I did notice the prizepot is now a bit empty so I've gathered up some kits that are surplus and I will be mailing them to Daryl over at the Guild, to be used as prizes for the next builds.

Anyway, what did I do with my hobbytime today? I was actually planning to write a few job applications but I'm better off doing that kind of stuff during the day, so I grabbed the first bag from the stash behind me, which turned out to be a set of 5 vertical windmills from Angel Brracks.

I received these about a month ago, I had to wait a bit for them as my order exhausted his stock and then some. But arrive they did in double time and they are quite nice I tell you. 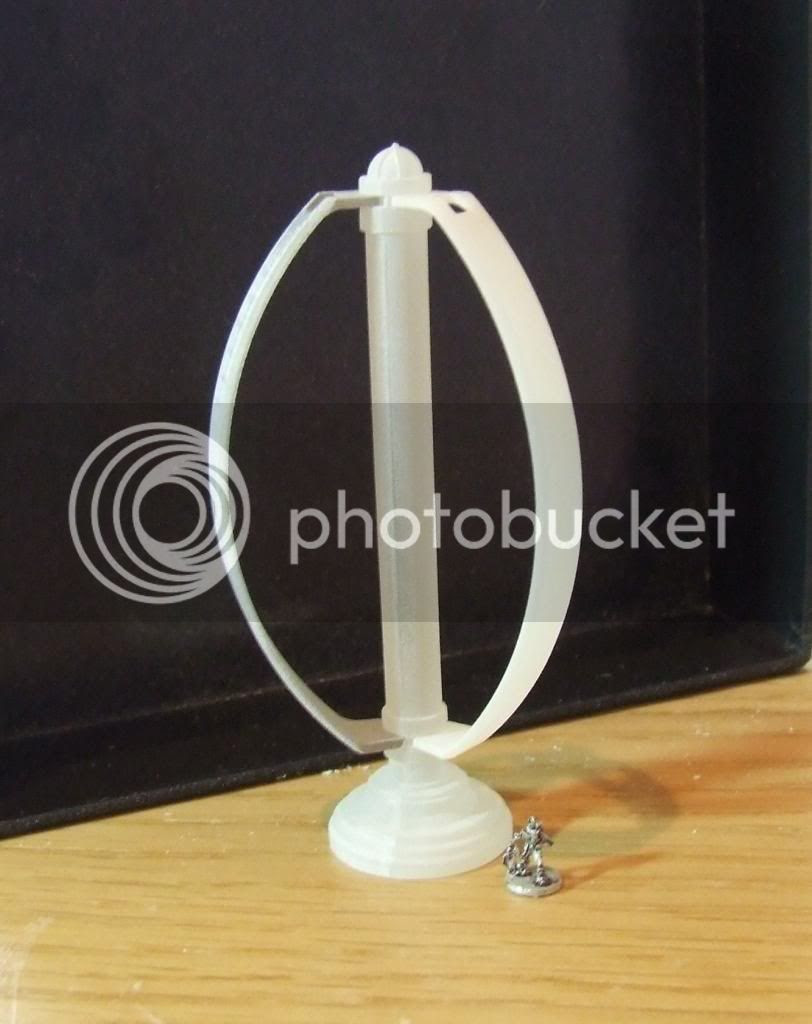 Meant for 6mm, they are sizeable windmills that fit in with present to future sf. As I won't be getting into 6mm SF for quite a while yet (maybe 2015, who knows) I picked up these for 15mm/20mm. I want them to represent the ones you would have in the back of the garden or at a farm as auxilliary power units, or on top of a building for green energy.

I just realised that I built all of mine with the opening on the blade on the lower half, not the upper half, but that don't matter, they look good either way.

Time spent cleaning them up was minimal, the central column takes some time due to the mould lines, which are quite thin, but I didn't spend more then 15 minutes sanding all 5. The blades were all sanded in a fraction of that time, and glued into place with gel superglue. I then based the lot on 40mm round bases and sandflocked them. I intend to paint them all offwhite or ivory with a red light on top, and keep the flocking on the base to a minimum as to increase the crossbreeding potential.


Angel Barracks has these in the Scenery section at a cost of 3 Pounds per turbine, which is quite acceptable seeing how much metal goes into casting one.

Highly reccomended for the 6-20mm table that has a SF feel to it. I hope to have mine painted up fast enough as I have a lot more stuff I want to get reviewed and painted up :)

Red and White. No Blue.

I, or more importantly the wife was a bit busy with delivering our babies while I was offline, and I am now the proud father of Nikki and Emma, born prematurely but quite the little fighters. Almost 2 months old now, words like cute and aaargh are used on a regular basis while in their company. I can change a diaper blindfolded now, being guided by smell alone. Bit like Daredevil, yet less heroic and without the red bodysuit. Here's a pic of them just a few hours old.

They are out of the hospital and doing fine. We've settled into the clean-feed-sleep routine andtrying to do the same for ourselves.

I struggle to find time to paint and model though, spending what little time I have online on the forums, reading. It took me all of the spare time I had for 2 weeks to cobble together this, and sorry for the bad quality pic but you get the idea. It is for another Guild Build, this time with the theme Red.

See? Red. And White.
Made for 15mm and 20mm games in mind, it is a generic tower that most of you propably have seen before. A scenic piece for on the table or a objective during a game, anything goes.

Service will be sporadic, while I've been offline I did buy the Ronin rulesset (well written, looking forward to getting some games in with Modhail) and I've been adding to my Hotz mats collection, of which I will write more at a later date.