Second vehicle for today. Picked this up intitially for a wreck, then changed my mind and turned it into a militia Technical, ready for a drop in weapon and crew. Standard Hobbyden resin, easy to carve and change it about. Very detailed, with a big bed so you have lots of room for various guns, artillery or just lots of troops. Reccomended for AK47 players and everyone who needs a militia vehicle. Vehicle costs 6.50 euros 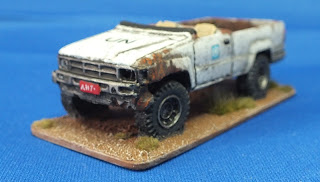 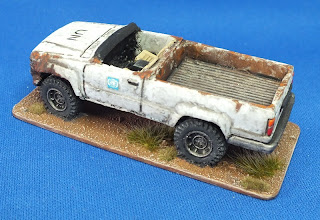 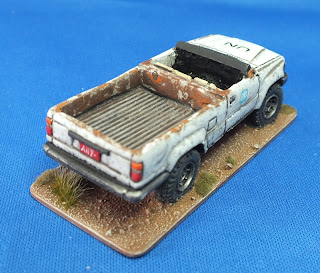 Just finished the Hobbyden HD34 Shorland Armoured Car, with the turret removed, painted as the vehicle for CNN in Bosnia.

Picked a few of these up a while ago, with a propable use for the 2012 Big Game police forces. Nicely cast, bit bubbly on the underside but no one is going to notice that. Softer resin then the RH Models one, so easy to carve and change it about. It did need 2 good scrub downs to get all of the mould release removed. The turret does not have a drop in hole, I would have liked that, but adding 2 magnets should not be too much of a hassle so no biggie. Nicely scaled, this should do well as a police vehicle for 3rd world countries, as an armoured vehicle for rebels and marauders or, as in my case, a vehicle for a news agency. Currently retails for 6.50 euro.

On to the pics. 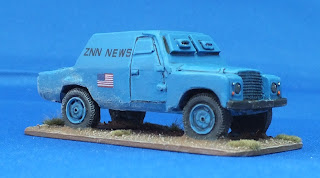 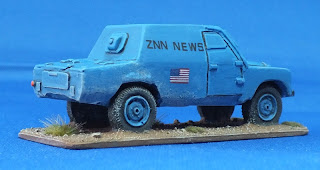 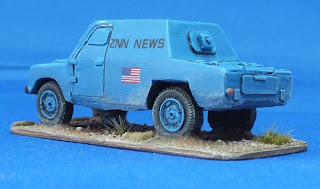 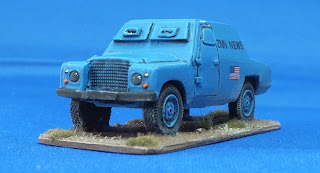 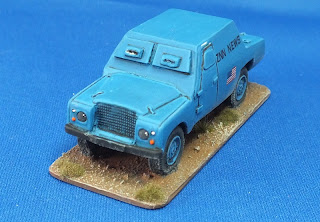 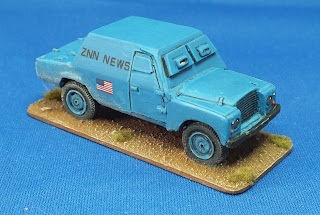 Finished a RH Models Militia Technical that I picked up a few years back when I wanted to do Blackhawk Down. Faded paintjob, no camouflage, pretty decent American truck (read: BIG). I find the bare tailend a bit of a letdown, the front part is well detailed. There is enough room to fit in a sabot based AA gun, RR or milita with a HMG so you should be able to change them to your needs. I'll be using mine for Lebanon. Price is nice and affordable, mine did suffer a bit from airbubbles on the wheels. Wish I picked up more of these back then, Liberation is a bit hit/miss regarding communications.

On to the model:

Just finished a comission to paint a set of 15mm and a set of 20mm skips. I hope the new owner is pleased with them. The skips are from The Scene. 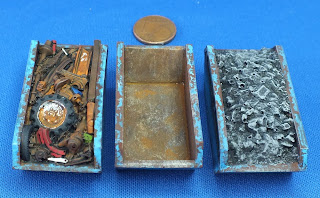 On the left, RB002 from the Scene, on the right, converted Germy quad walkers GMM-34, currently sold by GZG.

RB002, the not-New Vegas droid is fun to paint but I felt a bit limited by what I saw of it playing the game, as in how on earth can I paint a face on that? So it was sitting here for over a week, finished but faceless. Only when I was sorting through my decals for signs to put on the quads I found decals for the instrument panel of a 1/72 Apache, et voila, he now has a face. Painted him in Chinese colours, no number (I can always add that later), and not sure yet how to use it.

GMM-34's are from Germy's quirky 2mm sci-fi line now sold by GZG, which I picked up when they were released so I could use them as small 6mm walkers. I stripped some detail off them, reposed the legs and then forgot about them. Now I felt I could use some mobile power generators, like the ones from Star Wars, so here they are, 3 GMM-34 portable fusion generators.

Being mobile means you can direct them to where they need to go, either to power uip some tools, machinery or even systems on a starship. They are not the brightest tool in the shed, 3 big sensors don't prevent them from bumping into things sometimes. They are also very heavy due to the shielding. They come equipped with the standard warning labels, 4 power sockets and a strobe light and motion alarm to let people know one is moving. Mostly found on backwater world starports that lack a fusion plant or locations that want to stay under the radar, and some militaries use these as well for back up. Terrorists have tried to use these as mobile bombs but these have so many failsafe systems built into their heavily shielded hulls they shut down at the slightest sign of tampering.

Number 1/524 has one of the acces ports open and shows the socket for the coupling. Mechanics noted Q8 on the inside of the acces panel, propably a insiders joke.
2/unknown

Number 2/unknown has a different shell and Russian markings, GMM-34's have been produced and copied on many locations.
3/321

There is nothing notewordy to say about 3/321
Gepost door Gunbird op 12:08 6 opmerkingen:

Finished the transport for my 4 man Translator Team. Wanted to give them something with local flavour and not an armoured car, so took my alltime favorite, the Britannia Beetle and used that. Added a skibox and extra headlights for looks. I don't think the team will be quite happy driving this rickety thing, but at least they blend in more :)

Skibox is custom made, extra headlights come off a truck kit, Beetle is converted stock model from Britannia/Grubby Tanks. Decals letters are from I-94, licence plates from a Leopard 1 kit I think. The text in the picture means My day is a bad day (though not 100% if I spelled that right)
Gepost door Gunbird op 10:01 4 opmerkingen: