Tried photoshopping tonight, but with 950 pics to check and edit I kinda lost heart a bit, so went to the painting table.So I just sort of finished my next piece, Carlos Ruined Factory. Now, I could not make up my mind if I wanted a old ruin or a recent ruin, so went for something in the middle. I did remove the tank tracks and the track section by covering them with sand paste, making the piece more genric. Hence it will work as well in wars as post apocalyptic periods, though for the moment WW2 and Modern is all what I need.

Considering I've painted these 2 large scenic pieces in under a month I'm pretty chuffed. Now to do the other 20+ pieces I've bought and not painted over the last few years. :)
Gepost door Gunbird op 00:48 4 opmerkingen:

Leaving for Ireland tomorrow for a Weekend of Games! as Piers put it.

The schedule appears to be as follows:

Friday Daytime – Re-taking Gundhausen
BAOR and Bundeswehr forces attempt to re-capture the town of Gundhausen from Warsaw Pact forces.
(I've packed some items for both sides to bring with me, I'm game for either side)
Friday Evening – A Golden Opportunity
It is 1937 and the British Civil War has been raging for just over a year. Seeing the confusion and chaos that has taken hold across the United Kingdom, the Irish Army have decided to invade the North and retake the Six Counties. Unfortunately for them, BUF troops have recently landed a sizable force, supported by the Germans, in Belfast and they are busy battling regular British units fighting alongside the Ulster Socialist Workers Brigade. Expecting to walk into Belfast, the Irish Army walk into the middle of a viscous and blood thirsty civil war…
(My BUF commander and driver have been asked to attend)
Saturday Daytime – Advancing to Vilnius 1941
Elements of the 29th Panzer Division steam roller towards Vilnius during the summer of 1941. Their advanced is abruptly halted by the 3rd Tank Regiment of the 2nd Tank Division. As the advance stalls, both sides throw in more and more resources in an attempt to break the enemy once and for all…
(I've got no kit ready for this yet, but looking forward to this, lot's of early stuff)
Sunday – Beer!
And maybe a game of KG Normandy???
(I gamed a German fighting withdrawl in 2009 against Piers, maybe this time I'll be able to hold him off. Or maybe we will game something completely different, who knows!)
So no more painting this week, but next week you should see quite a few pictures here and on the fora.Well, if I get back on monday that is.....;)
Gepost door Gunbird op 22:25 3 opmerkingen:

My BUF alter ego and his aid and driver. No names yet. Car is in the shop too. 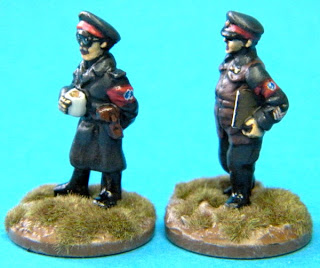 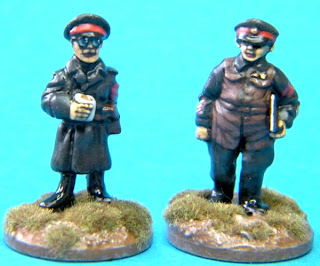 Left (me!) is a Britannia model, the one on the right is a Battlefield model. I like irony, as they are both soviets! I gave myself a pair of glasses but that was it. Armbands came out pretty good too. And I drink my tea with 1 sugar and a dash of milk, thank you.

Well, that was rather quick. Practically hyperspeed I say.

I'll let the G-Man do the talking:

I've kept it rather simple this time, just a few coloured stones,  black soggy wood, some weathering and about a tenner worth of tufts from various manufacturers.

I was going to show the VBCW version of me as well, but I gave that several coats of matte varnish in the past 2 days and it still shines like a diamond... not sure what is wrong. I used my standard matte spray over GW Gloss spray (first time) and it did nothing. Dried it in the over at 100 C for 2 hours, and resprayed it after cooling and let it dry all night. This morning again no difference. I then coated it with Humbrol Matte, and I just checked, no effect. Last attempt in the morning with Vallejo Matte, if that doesn't work I'll just have to take off the paintjob and redo them from scratch.
Gepost door Gunbird op 00:20 Geen opmerkingen:

I swear to God, if "gets easily distracted" was something you can add to a resume, it would be on top of mine.
Un-be-lievable. One of the, or even the main one, reasons that I never seem to finish stuff is because due to my gnat-like attention span there is always something else across the fence. And I'm not referring to the grass.

This is however the reason why I started this blog in the first place, as the Ooh! Shiney! syndrome is common with many gamers, but I for one have tired of it. Still, that doesn't mean it won't happen from time to time, and what do you know, it happend again yesterday.

British Union of Fascists
Don't worry, I haven't gone right wing all of a sudden. In the last few months, I've been browsing the laF forum and more recently a article in Miniature Wargames about A Very British Civil War, or VBCW for short. Something clicks inside my head when I read about it or see pictures. I've tried telling myself I should just look at the pretty pictures and be done with it, for a few very simple reasons:
- It's aimed at 28mm
- It's more of a Brit thing
- Who are you going to play with?

Still, I could not get it out of my head, so grabbed my bits box to see if I had anything suitable in 20mm to do up "just for fun" . 10 minutes later I had 5 models and a post up at The Guild enquiring for possibilities in 20mm. Which turned out to be a lot, there seems to be more available in Gods own scale then in 28mm. Which in turn nudged me to paint up 2 models, 1 being a representation of myself. The gloss varnish on them is drying now, I'll matte them tomorrow when it has fully hardend. Don't worry, you will see them.

Piers has already kindly offered to use his BEF to shoot them on sight so they will be with me on my trip to Ireland next week. And I'm hoping this is the end of my interest in the VBCW as I have more then enough work to do in other periods to be spending time on yet another one!

Now, to end this ramble, I have a short attention span. I've gobbled up a lot of information about the VBCW in a short time, and with these 2 models I hope to have fulfilled my curiosity. I should not spend any time on this when other projects, with deadlines no less, demand a lot of effort to get them done in time. So here goes nothing....
Gepost door Gunbird op 00:22 2 opmerkingen:

I've been using the proceeds of my sale to add books to my collection, but I found this and the Ruined Factory to interesting too pass up. It was brought to my attention by Faustnik over at The Guild, that a mate of his was making and casting buildings, and this is one of the 2 he showed. This particular piece retails for 33 euros excl shipping and is one single piece. Shipping from Portugal took less then a week.

I've added some 20mm vehicles for size (A Beetle and a T-70 Schlepper, both from Britannia).

Overall, a fine piece showing a ruined church, suitable, as Faustnik mentions, from the 12th to modern times, so you can use it with your knights, various civil wars right up to modern days. The church looks like it is meant to be ruined a short while ago as you can see in picture 3, there are 3 graves, one is either exhumed or not filled in yet. As I want to paint this piece as a long abandoned church with nature taking over, I will be covering that up and removing/replacing a few items.

I'm more then happy with it and look forward to painting and weathering it.
Gepost door Gunbird op 21:59 2 opmerkingen: