Right, let's carry on, shall we? 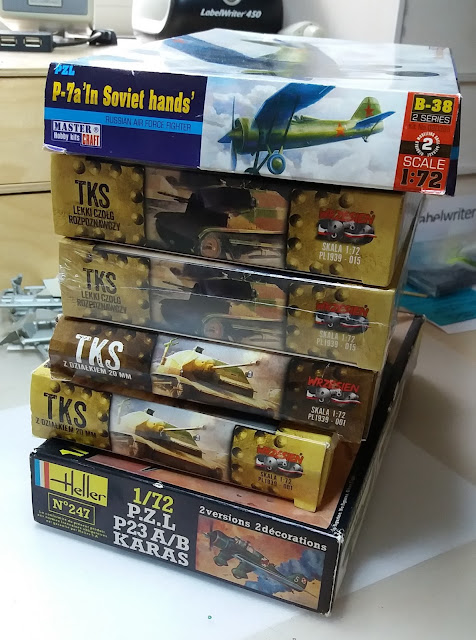 First to Fight TKS-MG and TKS-20mm cannon are meant for the scenario. While I was at it I also picked up a Heller Pzl Karas and a Mastercraft P-7a (yes, it says in Soviet hands, but I will show you why you can ignore that), these are not needed for the scenario but will come in handy if I ever decide to get a small Polish force and I'm more of a fun builder anyway.

First to Fight. New(ish) Polish brand, focusses purely on the Polish campaign and vehicles used by the Germans and the Polish (and maybe someday the Russians?). Clean little kits, well laid out on the sprue, slightly confusing webshop at times, in that changing it to English, it sometimes resets itself back to Polish mid browsing (and I don't read Polish) and when you do that, some things stay in Polish, but no biggie. Here is a top tip for you (you just need a little patience). I see these on Ebay being sold anywehere from 7 to 8 Pounds per box, somethimes cheaper, sometimes even more expensive. If you just want to build one to try it out, go right ahead. If you want to buy 6 or more boxes for your Polish or German army, be patient. On the website they cost 6 euros per box plus shipping (currently many vehicles are on sale at 5 euros per box) but on occasion, every couple of months or so, they have a sale in which you can select 3 kits for 14 euros. I picked up my first lot last year, and again last week. Processing the order can take some time but last time the order arrived in 2 weeks after the purchase was made. With shipping included, I ended up paying 5,60-5,75 euros per kit shipped from Poland to the Netherlands. I assume other countries will have different rates but you can see getting these straight from the source (if you are in Europe that is and you can avoid import taxes) is a much better deal then your online shop.

Anyway, why are they so nice? Let me show you. 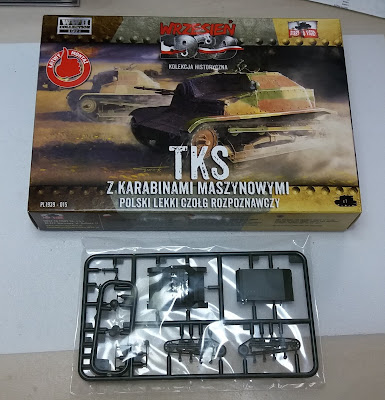 It must feel lonely inside that huge box (it's a normal sized box, juts a tiny sprue). 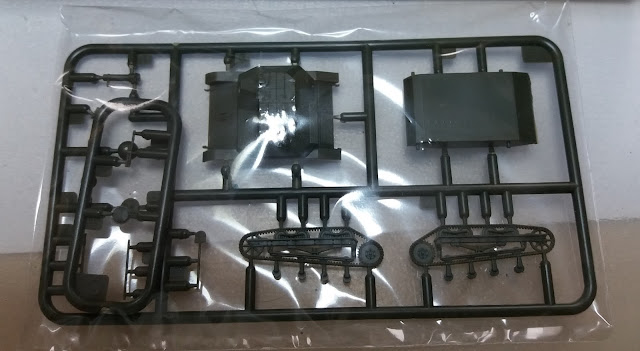 It's a tiny sprue because a TKS is a bloody tiny tankette, of course. My Hyundai Atos is a tiny car, and that is bigger then this tankette..... 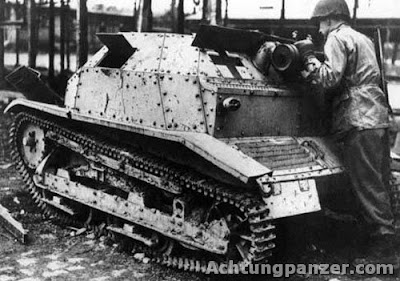 Anyway, it's a fastbuild kit. Left track, right track, hull, top, and a few little details like the exhaust and a shovel. A confusing bit is that my TKS-20mm kits both have a Polish sticker on it telling me it is the MG armed version. I'm guessing the only addition to a MG armed version if the even tinier sprue with a MG on it. Since I picked these 2 up at a bring and buy for 5 euros a piece I'm not totally sure so don't sue me, but I'm assuming a MG kit can also make a 20mm version, while the 20mm version of the kit does not come with a MG sprue? <confused> EDIT: TKS-20mm is only Sprue B, TKS-MG is Sprue A+B 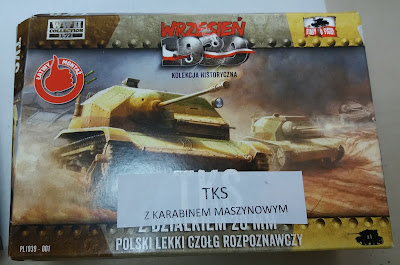 It's just my box that has this issue....don't know why but hey, the contents check out so hey. 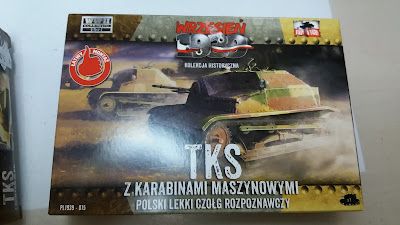 I will replace the plastic 20mm cannon with a brass barrel one from the 20mm quadflak set from RB models. It's not exactly the same and you need to trim it down a bit, but on the long run spending another 20-30 cents like this will make it live longer. maybe I'm just a brute, but long thin sticks of plasic never survive long here.

Building these will cost you about 1 euro per minute....so you are done in 5 minutes :) Sadly these don't come with opening hatches, but that is nothing a sharp scalpel and a few minutes of work can't fix. Other then that a great little kit and when sourced properly (for those not living in the wargaming Mekka called the UK) cheaper then resin offerings.

On to the air force.

The Pzl P.11 Fighter was augmented with older Pzl P.7's cause they didn't have much of a choice, they look quite a like and it was the only kit that popped up on the second hand group and it only cost me 3 euros. But Gunbird, I hear you say, that is the Soviet version? 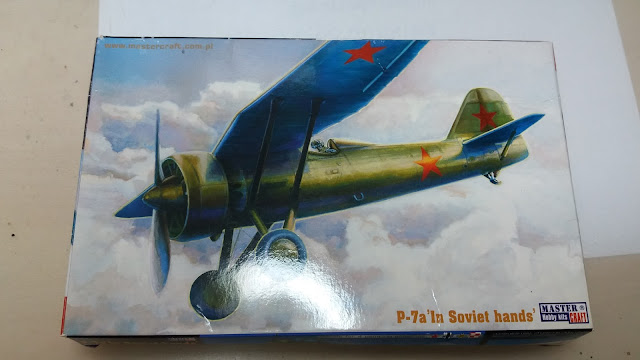 Mastercraft kits come in many, many versions of the same aircraft, and the same goes for this one. 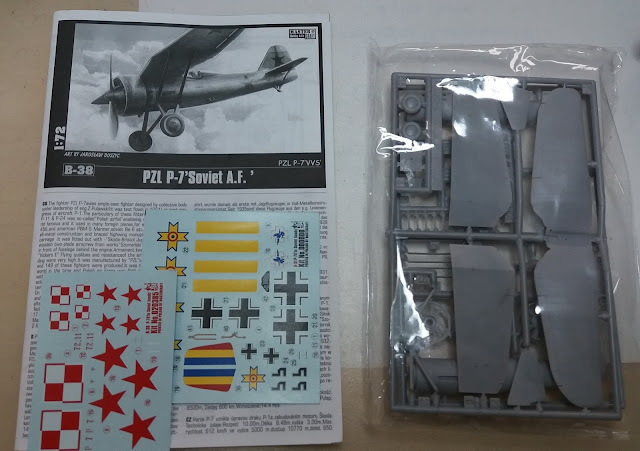 9 out 0f 10 times it really doesn't matter what version of kit you buy, as they seem to all come with a full complement of decals for various versions (this is not always the case though!). In this case it comes with Polish, Russian, German (spare swastikas!) and Rumanian decals and they are nice within register. I've never had bad Mastercraft decals tbh, but I can't remember the last time I used them so I cannot give comments on that. So, if you find that the version you want isn't for sale but others are? Check the various websites for preview pics, and it too comes with a multiple of decals, go with the kit with the wrong box art. It doesn't have a pilot though, but I have plenty metal ones to use so I will insert one of them. It might never get on the table, but hey, it will be a fun build, plus I will have to be a bit ingenious with strengthening the landing gear just in case.

Next up is a oldie. I think this box is actually older then I am? Can't complain at 4 euros though. 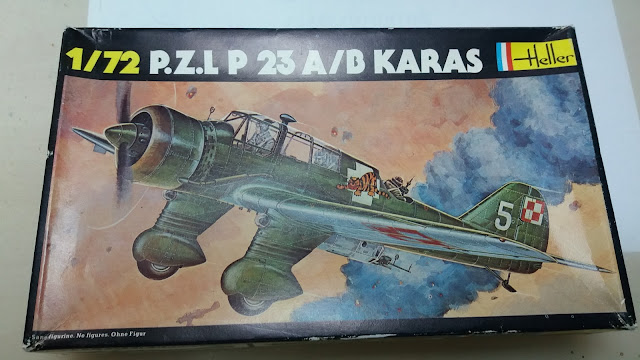 The venerable Heller Karas. Nice solid box, not that flimsy stuff they have these days. 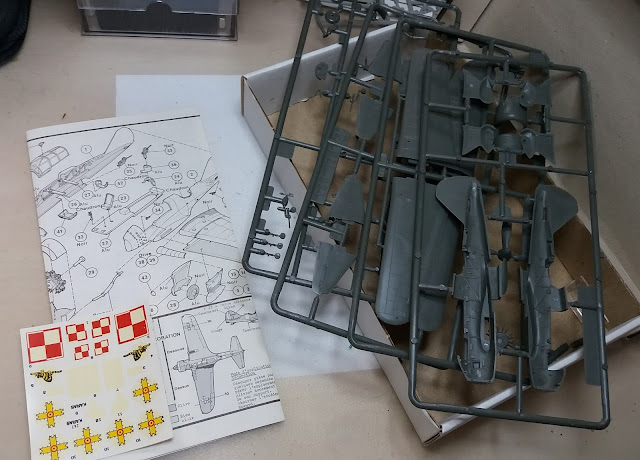 Some flash on the sprues, but it's very minor. Decals are faded, I can try and bleach them in the sun (just having a laugh here, I don't expect to see any proper sunlight till at least April-May) but I'm not having much hope they will actually will survice bathing and putting them on. Must have some in the spares box, just in case. I'll replace the plastic rear gunner with a metal one, and maybe the rear and bottom MG's with some wire just in case. It's a shame it does not come with any bombs. It would improve the kit immensly so I'm actively on the hunt for some WW1 German aircraft bombs to suit the bill (easy to find in 1/48, not at all easy to find in 1/72 or so it seems)

I did mention above that the book states a Pzl 23 and a Pzl 23B, but don't bother looking at that. The difference is purely in the engine and visually you won't see any difference, so it's good as it is.
Gepost door Gunbird op 16:40