Right, let's first have a look at the scenario. It's on page 47 of the Blitzkrieg book, and a scenario in the standard 1 page Battlegroup format, with a listing of the forces, a minimap, a situation report (and if there are any, scenario special rules).

This scenario is about Polish Lt Roman Orlik and his 20mm armed TKS tankette. It takes place on September 18th during a patrol in the Kampinoska forest, leading 2 other MG armed TKS tankettes. In this engament he spots a patrol of 1 Panzer IVB and 2 Panzer 35(t)s and ambushes them. He first takes out the lead 35(t) and the return fire from the Germans in unable to hit him. He then flanks the Panzer IVB, hitting it in the side and setting it on fire, and after reloading finishes off the 2nd 35(t) as it tries to get into cover.

He then sets off to rescue the crew of the burning Panzer IV, which happens to be commanded by Prince Viktor Ratibor (whom later dies of his wounds). >> The-Prince-and-the-Roman 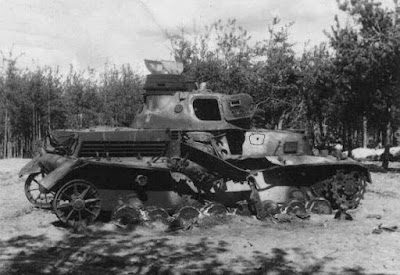 Anyhoo, this scenario has some special rules:
The TKS Tankette in Battlegroup can be taken as a Tank unit of 3 tankettes costing 30pts and 3 BR. You may upgrade the unit with up to 2 TKS tankettes at +10pts and 1 BR each. You may upgrade up to 2 TKS per platoon with FK-20mm guns at +2pts per tanks, but this is a Restricted choice.

The TKS Tankette can also be taken as a Reconnaissance Support unit of 1 tanks, gaining the Scout special rule, at a cost of 15pts and 1 BR. If you select the FK-20mm version you pay 17 pts and 1 BR instead, but this is a Restricted choice.  The third way to get a TKS tankette in your Polish army list is as a Platoon Support option for the Cavalry Platoon. This is the MG variant only at 10 pts and 1 BR.
With O armour all round, and a max movement of 8"off road and 12"on road  it's not much different then many other period tanks. The FK-20mm has 10 shots, fires AP only and to penetrate the Panzer IVB from the front it would need to roll a 9+ within 20 inches or a 10+ up to 50 inches...but there are always modifiers :) Side shots would be a more reasonable 7+ within 20 inches or 8+ withing 50 inches. Return fire from the 75mm L24 would only need a 5+ within 20 inches, but assuming the TKS's stay in the forest they are a 3+ to spot for obscured vehicle (firing), but with the special rule they become a 4+ to spot. Actually hitting each other will be hard, assuming both sides move and the TKS's stay in cover you are looking at a -3 to your dice roll, so rolling 6's when shooting is key. The MG armed TKS's have a ROF of 3. Area Fire has no effect on a enclosed AFV so is pointless, Aimed Fire....is also pointless cause MG's don't case closed AFV's to take pinning tests! Yikes, this changes things :D Oh well, good training mission to learn what does and what does not work when fighting tanks I guess, so makes a good introductory mission, even if the replay value is a bit low.

No artillery, no aircraft, no infantry. Shoot to supress or shoot to hit, and autocannons. The Polish get D6+1 actions per turn, the Germans get D6. A game should/will last 30-45 minutes including a basic explanation and use of the QRF sheet?

Scenery wise I have enough roads, but I'm lacking in trees. To help me out on that, I've selected the Tree Building workshop at the next Poldercon so I can gets hand on teachings from a experienced builder in making some (and yes Erik, I know you can do it too, but I'll pester you for that later). With some, I mean a lot. While I do have a nice collection of pines that needs rebasing, decicious trees are severly lacking.

Next posts I will be taking a look at both sides vehicles and the kits I will be using.....can't do much else properly while my finger is healing. (Funny (or disgusting) fact......at first I thought it had sliced a U shaped cut into my finger, but after cleaning the bandaid for the second time it looks like the blade was so sharp and fast it cut all the way through and the flap resealed itself with such precision that even my fingerprint is intact, just a bit frayed at the edges. Never had that happen, usually the top part dries up and falls off but it appears so deep that it just stuck back on again.)

On a side note, Piers pointed me towards AB figures (again) and they make a lovely 20mm French Tank Crew set that would work for Polish tanks too. AB is very expensive though (but worth it). And he's asked me to make 2 Crocodile conversions for him using the Airfix Crocodile and the PSC Churchill kit to keep everything nice and uniform. And about actually making the artillery you bought in game to put on the side table. Aargh, too many ideas.
Gepost door Gunbird op 02:38