On friday, after Kim left for therapy, I did the usual fridayroutine of going to the market, and on the way back swing by the 2nd hand stores. They had a few interesting things but nothing that felt really useful so I came back hoem early for a change. I did some more sorting and labelling in the room, and then decided to go up in the attic. To make a headstart.

Yikes! I could not remember it being this crowded, with a huge pile of crap in the middle and no room to maneuvre. Well, working counter clockwise coming into the room, I just started opening all the boxes and stacking them on my end of the attic. Repeat ad nauseum.

After a solid 2 hours and some proper weightlifting I managed to put almost everything on one side, clear the centre and the back end too, so I can get the cabinet up there on monday I guess. While clearing, I managed to find tons of stuff I didn't even remember I had, plus tons of stuff that can go really. I was also surprised to find I actually have a lot of painted stuff. I was very productive once :) 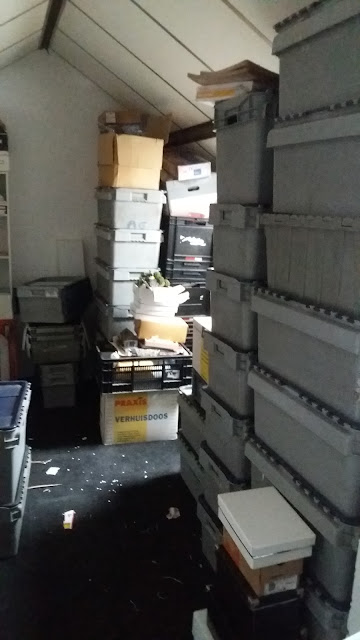 Centre cleared, on the right there are boxes 3 rows deep and behind that is a lot of loose stuff. 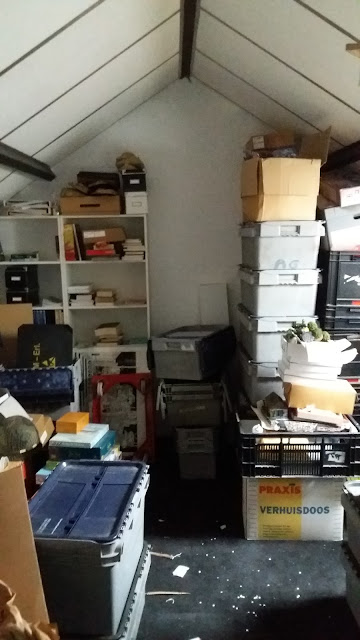 In the back end there is space for the next cabinet (granted, you would not say it now, but those boxes there are easily moved out of the way when it comes up next week) 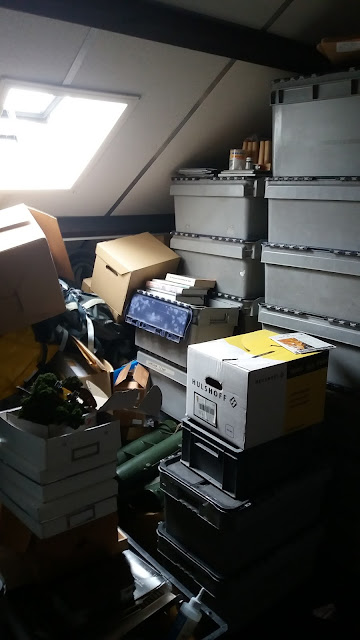 Christ, so much shite.

I did everything way too rushed, so my knee said "Fuck it" and it's still reminding me of it. Also, I had forgotten about my dust allergy and when I came down to wash my hands the water actually got black, and the same when I blew my nose. Haven''t stopped blowing it since, so I have really overexterted myself. But hey, I got the hard part done! The rest of the week is cramming as much kits in that cabinet as possible so I can see what I have, and get sorting on the crates, sorting it into Wargames Stuff and Other, which will make the final culling a bit easier. Technically, I have 4 weeks to get more stuff sold. Why this is important I'll explain a bit further down.

I also managed to find all my Battlegroup books! Well, can't find the bleeding mini rulebook but that is bound to turn up eventually. Cleared the cabinet on my right properly, removed more junk and made a nice shelf for the books plus some of my reference books for my neck of the woods during WW2. 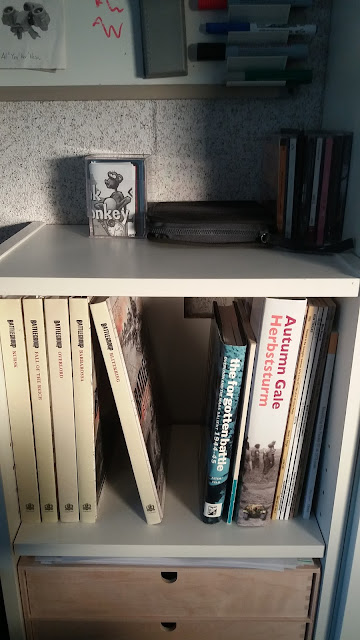 Basking in the low afternoon sun - I must find a proper place for those CD's or just turn them into MP3's and sell em. Bit of a waste of space on top, I'd like to add another Moppe on top (another one?! Yes, I confess, I'm a Moppe hoarder. But they are so bloody useful!) Anybody want to buy Spank the Monkey? Fun game, all cards sleeved and as new, in a Crystal Case. Kim doesn't like the game, it's too violent, like Robo Rally. Sadly :(

But I bless her too :) When I mentioned yesterday that I miss my times in Ireland and painting with deadlines, she said that that time will come again. We just need to ride this out, find proper jobs so we can actually start saving money again and when the girls are a bit bigger ther's nothing wrong with Daddy going to Ireland for a long weekend. Till then, why not just paint so that when that time comes, you can just pick stuff off the shelf and not be stressed out by deadlines? I propably don't mention it enough but I love this woman more then anyone before her. :)

Tbh, I'll be pretty much painting for King and Country cause whatever local interest there is in WW2, those people all play Bolt Action in 28mm cause that is what you can buy in the shop (FOW 15mm has gone extinct here) and I would have to be pretty convincing to get them to try 20mm and actually make an effort to get stuff. Yeah, ain't gonna happen. Also, I'm not forcing Modhail into this. Once, he painted up some very nice 20mm Afrika Korps but that interest died a long time ago. And he has plenty of other issues atm so no.

Leaves me with A,B and C. Well actually, it doesn't. If I choose C, A is already included 9 out of 10 times. It's a small step from completed scenario forces to B. And yes, that involves painting for both sides, but Modhail has already mentioned that while he is not interested in painting them, he is in playing with them.

So, what scenario? After helping Piers out on his previous scenario's for the WSS magazine (mostly fact checking, help with streetnames and Google Maps and stuff, he has kindly given me 2 more complete dscenario's for the next WSS (the November 2016 issue I think)

I've taken the first scenario as my lead for what I have to do in the coming months.

It's not a very big scenario, the BR are low and it's a simple table with some roads, crossroads, a couple of houses and woodlines, but there is one difference; it is a night game. I'll leave the details for the scenario in the magazine, but it looks to be very interesting. No table size is mentioned so I'll have to ask Piers about that (I'm guessing a 4x4 though?)

For the Germans, I have painted almost all the infantry, but I was missing a 3rd MG team - my recent Grubby order sorted that out. I have no Jagdpanthers though. That is now one of my planned Crisis purchases. And some additional bits fro it from EWM as the S-Models Jagdpanthers have bare sides.

For the British, I have nothing painted. I have enough infantry, but no truck. I hear Airfix do a nice set with the QLD in it, so I will keep my eye open for it. I have plastic jeeps from Academy, but no British crew. I have a couple of boxes of PSC British M4A4 and Firefely so that is sorted. As far as I know I only have 1 box of Carriers but again, no crews. And I need 6 of them. And I'm assuming dismounts too. Most of these can be covered by Britannia carrier crews and seperate infantry. I'll need to find a source for seperate Piats, Brens and 2 inch mortar ammo to properly model them, but I think Sgts Mess has that covered (I might even have them already). EWM and SandS both supply extra tat for British shermans so I will google that as well.

After the weekend I will do a final check and sort out the wish list for this force. At times like these it's pretty handy all of my stash is labelled and I can quickly sort through the boxes.

Since I've dropped a few things off my Crisis pre order list, and I'm rather really happy with my newly purchased roads, I've been browsing the web for cheap boxes of more road addons, to be precise railtrack and cobblestones. Getting them right from the UK is not an option. Even with the low value of the Pound, the weight adds up and only one UK shop sells all 4 of the different boxes that I want. And that's Wayland Games. And I'm never ever going to buy stuff from them as they just take your money, don't communicate and God knows when your stuff turns up, if at all. Frontline Games from Germany is attending Crisis and has all of the 4 needed boxes in their sales list (and quite a few more). They also have a nice 20% off offer for Crisis so I'm giving them a go. I've ordered another box of crossroads, a box of railway track, a box of railway track bends and Y junctions, and a box of cobblestone roads. Shy over 100 euros, no shipping costs, and I can pay at the show so I have a couple of more weeks to collect the funds - which is the reason I mentioned before. I've decided not to buy the rivers but make my own, as for the Netherlands small and wider canals are what is needed, not neccesarely big rivers (maybe later). I already picked up several sheets of hardboard from the waste wood bins to cut into 30cm strips and then work into canals, but that too is a project for next year. 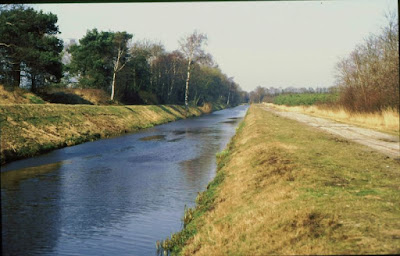 The Defensiekanaal isn't terribly wide, and I can easily make 30cm wide sections with typical Dutch bridges, either simple concrete ones or the ones that actually open. But that's a project all on its own.

Closing shot of the day is the pic I found off a MG nest from the Westwall which is nothing more then some dirt and a steel plate. 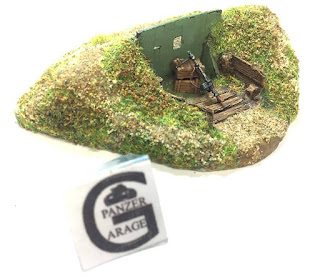 If I leave the area behind the plate open I can just put up a 3 man MG team there, behind cover, for a simple and fluffy MG nest. Should be a nice in between job someday :)
Gepost door Gunbird op 02:02