Breaking the bank, breaking my back

Well, not literally, on both accounts.

I want to sell 200 euros worth of stuff to cover the preorders and have cash in hand when I get there, with any stuff people pay me for at the day just going in the wallet for later. Sofar I'm 75 euros in with 3 weeks to go. Some stuff has sold blisteringly fast, while others are slow like molasses. In the Arctic. At wintertime. I can never get books to sell, so it's a good thing I gave up RPGs back in the day (no, not the exploding types) cause they don't seem to be worth the paper they are printed on.

Anyway, I got the cabinet in place :) 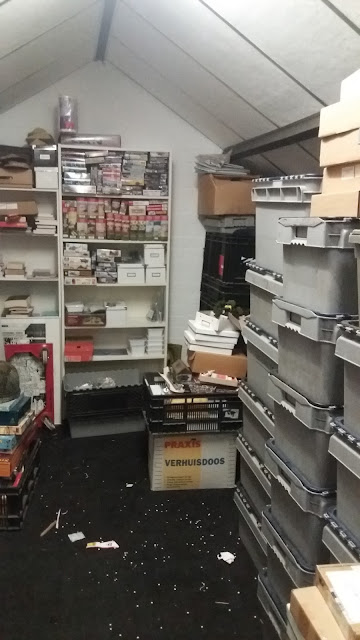 I grabbed the first few boxes I knew had kits in them and put them in the cabinet. Top shelf is all 1/72 armour and aircraft from various plastic producers. 2nd shelf is all PSC. 3rd shelf is 50% PSC, 50% other manufacturers. There's another box with a shelfs worth of PSC kits inthere somewhere. Also there are 3 or 4 crates with nothing but plastic kits in baggies. As soon as all the crates have been checked over (bag them and tag them, Sir!) I'll do a spreadsheet of what I actually have, and then see if I can sell some of it off. Or as Chris said tonight, why don't you sell your surplus of PSC off now?

Well, here's the catch. I don't really have a surplus of kits? Work with me here. I bought a lot of this stuff new when I had a solid job. I might hope, but I'm not expecting those days to come back. Sure, we will get by, but nothing more then that. Kids, house, car will come first and if there is anything left it will (and should) go into the savingsaccount (or under the matress seeing as interest rates are almost 0) so we can actually pay off our house before we turn 70. Long term planning much? Once all my surplus stuff has been sold, that will be it. Heck, I even sold the doors off the cabinet today cause with so many kits in there the doors can't close anyway and hey, it's another 30 euros in the bank. Wanted to sell the cabinet top too as I didn't think it would fit. Kim asked me to give it a try and it fits (barely) so that is staying (not in that pic btw). When she came home today, I dragged her up in the attic to show the progress, and she was so happy with it. So happy in fact she started clearing out her boxes into her cabinets straight away. Had to drag her down at 17:15 cause she forgot about the time (she is almost done now). Anyway, the kits. Long term planning. They are all stuff I want to build, convert or adapt for my forces. So I'm not selling (most of them).

I've spent the rest of the day listing stuff and fixing things in and around the house. If Kim gives me chores like that I try and do them straight away. My heavy handedness cause me to rip off the button in front of my labelwriter (though I blame the shoddy lowest bidder construction, naturally!) but it was a clean break. Lacking a soldering iron I can't just fix that, but I noticed it made contact when I put it down on the broken connectors so I just hotglued it in place. 50 euros for new one saved, thank you very much. Everything else on the list was done in the morning.

Busy day tomorrow, including a meeting to discuss my reintegration plans, and want to get some more stuff down from the attic, sorted and listed, plus the desks cleaned...too much clutter from small stuff that needs to be listed and sold. I'm designating Friday as an off day though. I only have a Social Services meeting, but thats here at home, and I'll wow her with the major progress that has been made in the attic (in no small thanks to Ywan I might add) and that be it.

Part of me thinks this is all going way too fast, and part of me feels it's not going fast enough. Then there is part of me that is running in circles yelling: "Weeeeee!" but we ignore that part. 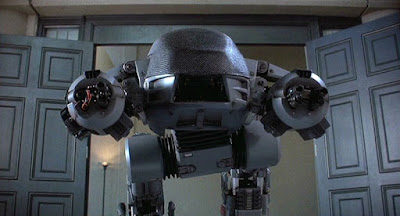 Finally, meet Ed. He's coming to visit in a few weeks time. I'm so looking forward to meet him :)
(No, I have not gone completely bonkers. I found an Sales topic on the LAF offering 2 of these in 28mm for sale. I really like ED-209 (even if it is a bipedal clusterfuck) and when the seller offered to split the trans Atlantic shipping cost I could not say no. Just don't remind me of how much they cost me. Look on the bright side, they will be great for Pulp, TNT and anything else they can make a cameo in)
Gepost door Gunbird op 01:12