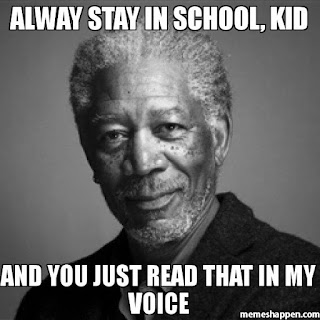 Well, since my last Blogpost I've been rolling from surprise, fear and then happyness and then some.

I had a meeting last week with my reintegration....worker? officer? man-person? What do you call such an individual in English? Anyway, he had just had a phone call from the agency representing the insurance company from the man that hit me (still with me here?) about funding the next step of the reintegration program if the UWV will not (and that is almost certain). As she feels that is vital to my recovery (help > job > feel better > less pain > be a productive member of society again) she will push for that with the insurance company. It's by no means a sure thing, but at least it gives some breathing space.

So instead of having a bit over 4 months time to find a job which may or may not suit me, we now have a bit more breathing space, and more importantly, more options. I have a meeting tomorrow about my appeal to ending my sick pay, but we are quite certain it will be upheld so I will roll from sick pay (ZW) to unemployed pay (WW). The UWV will hardly lift a finger if you are in that. They expect you to find a job by yourself, and penalise you when you don't. But......if you want to improve your chances on the jobmarket, you can apply for a 2500 euro allowance to get a education for one of the jobs on their short list. Which is anything from a brick mason to certain high end jobs.

Let's face it, my resume isn't the best. Yes, I've been working almost non stop since I was 16 and have a ton of experience. Degree wise, not so much. I've got a paper showing I finished the first year of HBO (which took me 3 years) and sometimes this is lauded by companies and other times it put down as a wash out. My sales training was only good enough for a MBO level 2 and to get anywhere these days you need MBO level 4 minimum and all the other diplomas I got didn't add anything to that.

So, MBO level 4 degree, and a desk job due to my knee. I have a lot of experience in sales and customer service. So, we are now looking at a basic administrative degree, and then one focussed on commercial activities. My reintegration guy is pretty confident he can find me an 1-2 day a week internship for it while I'm studying for the degrees, and he has some pretty good ideas about which companies would be interested in hiring me.

So, I've spent some time going over the shortlist he gave me of companies that train people for that, and are at least a bit local. Courses are available in the next 2 big cities, within easy reach, and classes are either in the morning or evening hours. Great, I can work with that.

Then lastnight, I got an email that the first aid course I want to do locally to get my qualification in order, is starting in the 2nd week of January and if I was still interested. Courses would be on tuesdayevenings from 19:30 titl 22:00, from January till May. Sure, excellent, let me type this email telling them I'm in, send me the bill........and then I took 2 minutes to check the days which the training for the administrative degree is actually on. Yup, tuesdays from 19:00 till 22:00.

So, a quick email to the first aid training centre in the next city, who replied they have their training on the exact same day and time....and a email to the training institute who is nr 1 on our shortlist. Yes, training in Den Bosch is indeed on tuesdayevening and friday morning. Oh, it's for reintegration? We have different classes for that (didn't see that on the website). Turns out reintegration training is 2 classes a week, and they are at different days and times in the next 2 cities. The lady was kind enough to explain to me that I could take 1 class in one city and another class in the next city to make sure everything worked calendar wise. Best thing, neither cities classes times conflict with the first aid training. Nice. Also, I can start the classes anytime I want so technically I don't have to wait till April for the next series, if there is room I can take  a slot. The reintegration classes are mixed, mostly with the computer and some bookwork, and there is a teacher present to ask questions..

Great. I can see that working. I tried to get a managers degree 10 years ago but with only online training and no pressure to get things done it petered out in a few months time. Now I have a damned good reason to get to these classes, work hard, and get those qualifications.

There is the small matter of cost though.....

First aid trainig - 180 euros (of which my health care insurance will pay 100 euros for me being a decent human being - which I already was as I got 4 different first aid qualifications when working for the UWV, from being a first aid drone up to site manager and first aid training planner, but you need to take exams for all of that once a year and once my contract with UWV was finished I didn't exactly have the money to sustain that)

Basic Administrative employee training - 1645 euros (for which I have several options, either pay it off over a set timeframe (by selling a shitload of hobby stuff?), lend the money from one of my more well to do relatives who more then once told me that if I'm ever in need of something, I need just call (my uncles, my dad, or even my brother.....but asking money from relatives is hard even if I want to pay it all back), or push the bill towards the insurance company)

Both of those could be paid for by the government grant.

My current hope is that by the time I turn 41 next year, I have 2 new degrees and a first aid qualification under my belt, have spent quite a bit of time as an intern and maybe already have a job?
I really don't need any other Christmas gifts other then that (not that we do that at Christmas, but hey).

But Gunbird, how does this all relate to the hobby? Well duh, a job creates financial stability (would be nice to save money for the future) and makes me plan my time better. Atm I can almost do what I want, whenever I want, and consequently, almost nothing gets done. Also having a sense of fullfillment is very important to me. Yes, I love comments on my ideas and paintjobs, just as much as I like working someplace that appreciates my talents. I might even be able to take a trip to Ireland again for a weekend of games with Piers and the bunch.

I made a small order with RB in Poland (they sell brass barrels) for models I want to build in the coming 6 months.....and promptly forgot to order Jagdpanther barrels <facepalm>. Well, next year.
Also, the last of my purchases arrived this week. 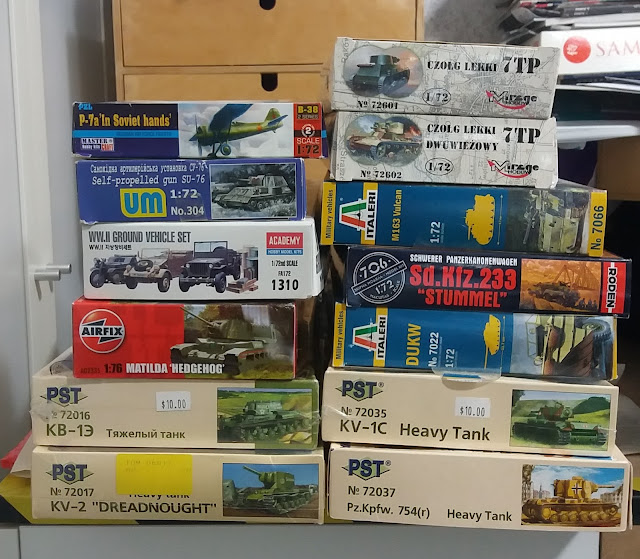 P-7a Fighter for the Polish...either as a wreck or for actual use, not sure yet. Counts as a fighter with guns or bombs in Battlegroup (Well, technically the P-11 but this one was 2,50 euros from a local seller so won't pass that up) and the rest I told you about last time. Was pleasantly surprised to find almost all still sealed and the German KV-2 has a sprue for a KV-1 turret extra so I could just swap that if I like and make it German or Russian.

Other then that my buying days are over....for this year anyway :D

Did sell some more stuff and made some trades and someone who knows someone locally that has a sister that has "train stuff" asked me if I wanted a small Dutch house? Sure, surprise me....so she will drop it off later this week.

And much to my relief, all 3 packages to the UK and Ireland that I have sent recently, after taking detours and what not, ended up at the buyers locations. 3-4 day delivery became more like 10-14 days delivery.....ridiculous for a Channel hop. It just proves again that you should not ship stuff in December.

Going to a gamers meeting in Zutphen on saturday at the home of the WSS magazine and I'll tell you all about it when I get home.

And that is all folks.