As I'm almost done cleaning most of the Taliban I want to use (and have more on the way) getting some kind of references ready would be very handy. I found this article to be very useful: 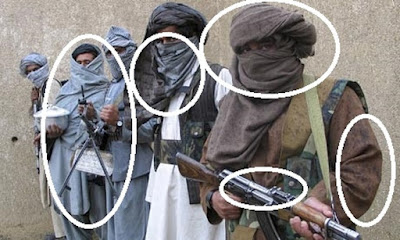 L to R:
1. lovely blue hues, perhaps a baby blue might come out nicely after the wash?
2. mixed dark grey tones - easily achieved with a mid grey tone before wash.
3 TOP. nice dark brown tones for the turbans.
4 BOTTOM. black/grey gun metal. this was requested by my client as opposed to "metal" metal. i shall achieve this with a flat foundation black and then a drybrush after the wash. 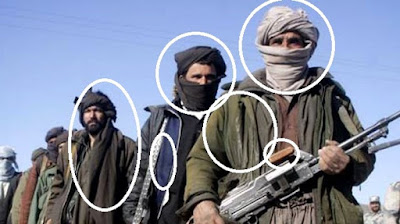 1. Dark brown turbans once again - PATTERN ONE
2. Dark brown turban again - PATTERN ONE *
3. Deep blues, perhaps using a regal blue i could achieve this but with the wash i would rely more on a uniform blue or even ultramarine.
4. Green Parka color, easily achieved with a Catachan Green color and wash.
5. Beige turban, I could go for a bone color but the beige here is more brown and less like the previous Bibilical commission so i will stick with earthy tones if i attempt this.
6. Gun detailing, the detailing here appears to be a light pine color. i will perhaps try a bestial brown or maybe a leather color.

1. Parka Green - PATTERN TWO -  The green is used here for the bullet and ammo pouches, perhaps i will use it for both also, though i imagine on 15mm it will look both lazy and rushed.
2. White robes and clothing, this is a lovely thing to notice as i have used a white undercoat! and white as a color takes the wash very well!
3. Dark grey  - PATTERN THREE - The dark grey appearing here once again this time in the clothing, i like this but i find it to be drab compared to the more exciting and pastel colors employed by the other fighters.
4. Dark Brown clothing  - PATTERN ONE ** - Definitely becoming prominent here. And something i am glad of as i LOVE brown.
5. Beige ammo pouches - These are simple and small, though they do make up quite a distinct quantity of the commission detail, therefore i should pay heed!
6. SHOES! thank god! believe it or not the shoes of a miniature can often become something that people completely forget about. I've had orders where they get to me and suddenly i am like "oh...what kind of color leather boots do they have on" and no extent of google image searches helps me! i can clearly see here that the taliban warriors are wearing Black and cream shoes. Both helpful and integral.
7. BEIGE AMMO POUCHES - PATTERN FOUR - great! we have four patterns! that's awesome. so now i know that i SHOULD use a beige on the ammo pouches. with that in mind i wil throw in a brown or black one here and there but mostly i will use a beige color. Fantastic.
8. LOVELY BLUE HUES - PATTERN FIVE - what a way to round off my analysis, like a bookmark of the first few points. These blue hues are almost german grey so i will dig out my ww2 paints!

In conclusion i can say that i have at least FIVE key pointers now.


1. DARK BROWN - Dark brown is a lovely color and as luck would have it, my recent commission dictates, is not one to be scared of when using the wash. Simply the fact that most white metal recess' are deep enough to hold the wash, it still works. I shall use the brown on many of the turbans and most of the clothing.
2. PARKA GREENS - i am so glad to see this one come up. i knew it would and i had that gut feeling it would be important. Being a big color i shall use it on a few jackets, maybe some jeans and definitely a few head pieces. Besides that maybe an ammo pouch or two.
3. DARK GREY - The Dark grey utilized here is exactly that, DARK! i might use this one but if i am honest it would come out so close to a black with the wash and i would have to layer it, which sadly is not something covered by the troop job. There are always ways of working around something! in this case i simply have so much color choice that it doesn't matter.
4. BEIGE AMMO POUCHES - i am glad this one came up. when you have a repetitive but crucial detail it is important to approach it confidently, else you are more likely to end up burring it in layers of re-does!  A handful of BEIGE pouches supplemented by some brown and some black sounds lovely to me!
5. THESE "LOVELY BLUE" HUES - I LOVE UNIFORM GREY! there i said it. since i did my ww2 order last year i have had a serious soft spot for uniform grey and its ink washed result. i am looking forward to using this grey on the miniatures clothing and other parts.

Also, I want to start prepping my Mogadishu figures, and for that I need a black skin tutorial.

Something I’ve always wondered about miniature war-gaming, fantasy and sci-fi in particular, is why in the 21st century, we still insist on painting all humans, elves and dwarfs in “vanilla” (no pun intended) Caucasian flesh tones.  I’ll admit that in miniature painting terms it would be hard to represent certain racial types by paint work alone.  Oriental skin tones, for example, are very similar to Caucasian, it’s their eyes that are their distinguishing feature and I don’t think this can truly be represented on a 28mm figure unless it’s sculpted to look oriental.  Similarly, there’s an overlap between tanned Caucasian tones and Mediterranean/Latin.  But there’s one obvious racial demographic that stands out quite starkly against the all white backdrop of today’s miniatures – black/African skin and I don’t know why we don’t see more miniatures painted this way so I decided to give it a go.  I did a bit of research into this and found that the reason many painters shy away from it is because it is very difficult to do (although hopefully in this tutorial I will convince you otherwise).  The reason it is considered difficult is the sheer contrast in the tones you must highlight through.  In the most extreme examples, black skin has darker shadows, being naturally darker and brighter highlights, being naturally more reflective.  Consider the example below, which is taken from the film the Gladiator and pairs Maximus (Russel Crowe) with Juba (Djimon Hounsou) in their first fight and also provides me with an ideal way to visualise my point. 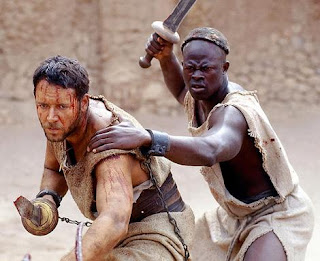 As you can see from the picture, the dark areas and shadows on Juba’s skin are much darker than those of Maximus’ skin, which is understandable given that Juba has very dark skin.  However, if you look at the highlights on Juba’s skin, they are almost white, whereas those on Maximus’ skin are not much lighter than the shaded areas.
However, there are as many different shades of what might be termed “black” skin as there are shades of “white” skin.  There are examples like Juba above who have very dark skin but with a slightly red/brown hint, there are other examples that are almost black with a slight blue hint, there are some with pale skin that is similar in tone to Latin skin.  Some of these are easier to paint than others.  This guide will tell you how to paint skin not dissimilar to Juba above.

You will need the following colours from the Citadel Range (I need to translate this to Valejo)
You will only really need the Kislev Flesh highlight on centre piece and character models such as generals and mages.
Anyone using other paint ranges should use the Colour Conversion Chart link in the menu on the left of the screen.


Base coat all of the flesh areas with Rhinox Hide.  This is best done over a black base coat as it adds a little extra darkness to the skin. 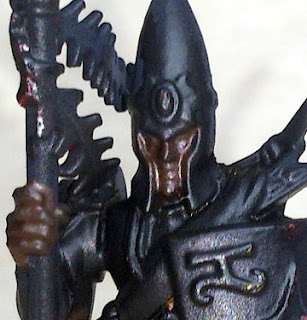 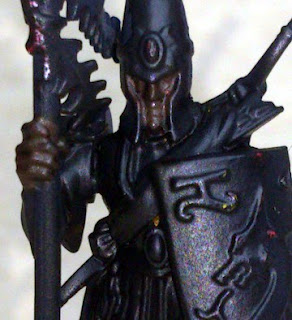 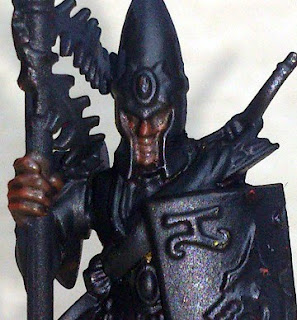 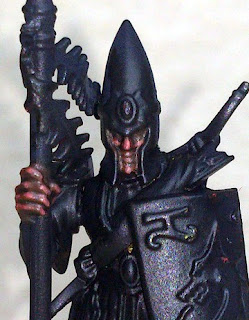 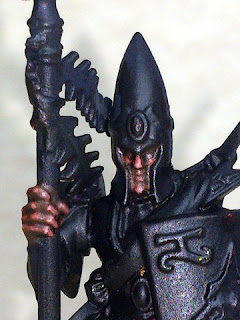 As an optional final stage, you can add a coat of Reikland Flesh wash to help blend some of the colours, however in many cases, such as the one above, you won’t really need it.