Impact - what a lovely day

Today, I had a day to myself to viist the Impact wargamesconvention in Eindhoven, run by the Hired Guns from Uden. Usually this is held in Uden itself but they had been looking for a bigger venue for a while and found it in Eindhoven. This made me happy as Uden is further away from me then Eindhoven, though with travel time (bike to train >> train to walking and everything added up it makes no real difference. Just cheaper.

Today was a good day.

First, a photoimpression of the tables I looked at. 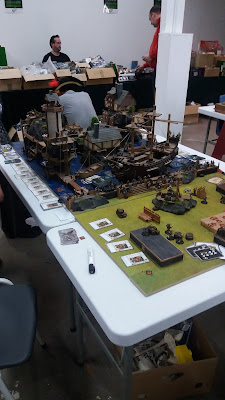 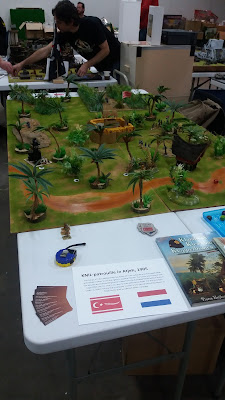 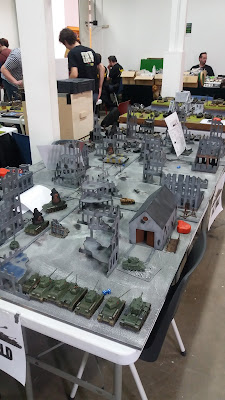 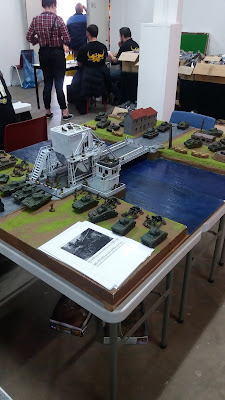 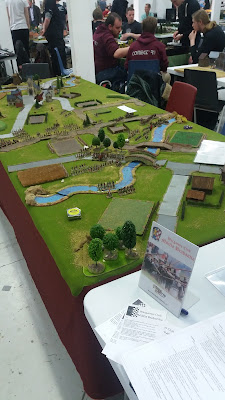 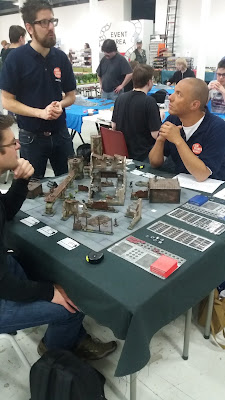 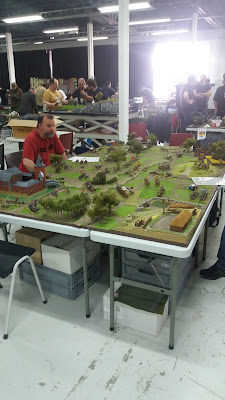 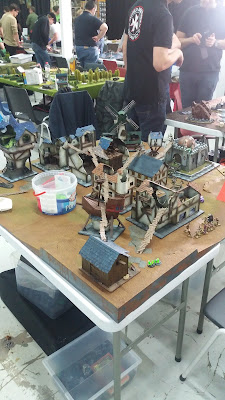 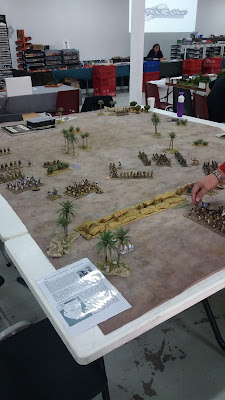 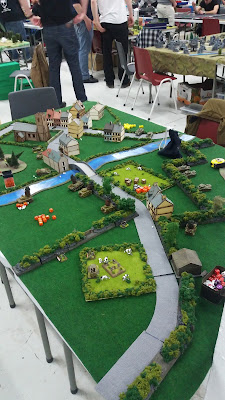 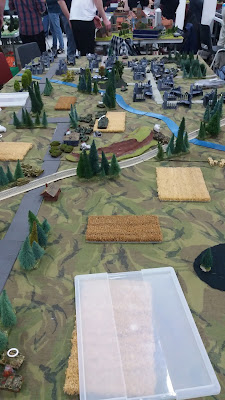 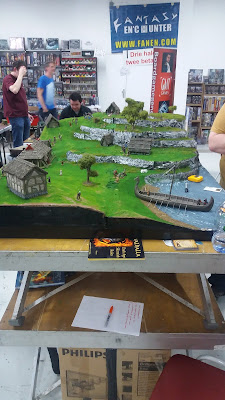 My apolagies if the pictures don't pan out well....new phone since yesterday and I'm still getting used to it. Must also get a memory card for it.

I spent the morning chasing after people I was trading with and casually skimming the rather smallish Bring and Buy (all 2 metres of it). Found another Macragge flyer for 15 euro, but on closer inspection it was missing the main body with the tailsection so I passed on that...too much money for an incomplete kit. Seller didn't even realise it was missing the part untill I told him about it. Tons of books for sale, but I'm passing on more books as I'm looking to sell most of my own. Did find a big bag of Warlord Late War Germans and 4 Lunar Class Imperial Cruisers for BFG (2 standard and 2 with Nova Cannon) which will make excellent additions to my Imperial Fleet.....that I must paint in the near future. Modhail insists :)  The Germans I picked up for TNT conversions at a later date. 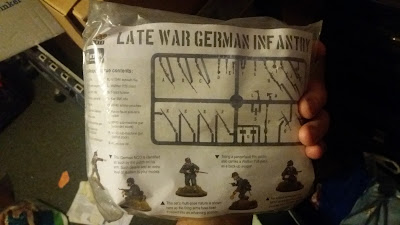 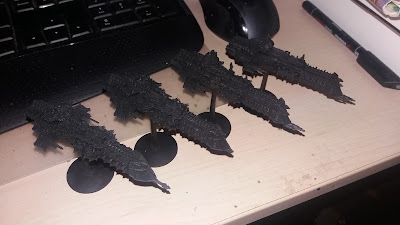 My trades were a box of 30 Warlord Ancient Brits (new in the box, also for TNT conversions), a big stack of Styrodur 5mm plates so I can make even more wall sections and couple of 1/72 aircraft kits (C-47, Do-18, Me-262 and a MH-60K Nighthawk (which I need for my Black Hawk Down stuff)). Also a small stack of WH Zombie sprues, a SM vehicle accessories sprue, a large post apoc battlebus of some sort. Finally the 2 GW Cityfight books, a Necromunda Enforcer warband and some 28mm Inquisitor models. 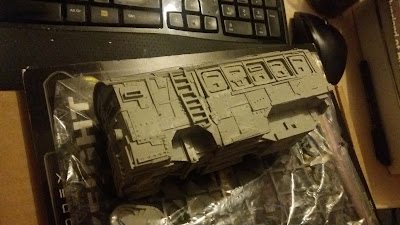 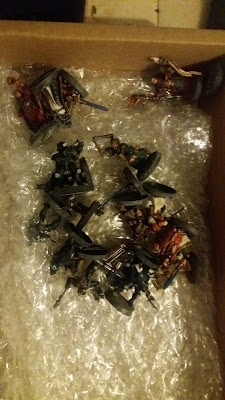 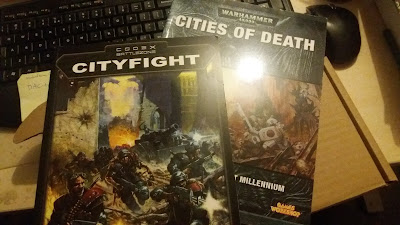 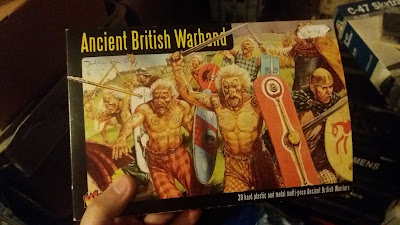 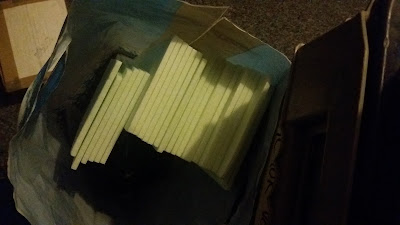 I didn't buy much. Just a NIB Inquisitor Gideon Lorr for a eyewatering 5 euros (this model has sold listings on Ebay ranging from 10-25 Pounds, none of them NIB) making this a extremely good deal and some radioactive D10 dice for the TNT Demo kit. I had intended to buy brass wire from Dax Magic, but as I had not sent a message in advance they did not carry them with them. My own fault. I will make a purchase at a later date as I found 2 more strands of wire when cleaning so I can go on for a while.

There was plenty more stuff, a lot more traders compared to the previous edition of 2 years ago. Loads of stuff though that does not interest me, like X-wing and other collectable miniatures games. I had looked for some FoW stuff from the Israeli wars, but found none, only tanks of Vietnam stuff and 2 vendors with the new Team Yankee stuff. The little bit of interest I have for that period is aimed soley at 3mm right now, so no loss. Most of the prices of kits I can't afford anyway. I might try and save up for a box of Crusader Sergeants, but that is another 26 euros maybe better spent somewhere else. I'll cut off any spending for a while as I need to save up for the battle table.

At the end of the day, after trades, entry fee and train fare, I came out with more money then I had started with....always good!

Socially it was great fun as well, I met plenty of fellow wargamers that I have dealt or chatted with before, Rikh also showed up (Frostgrave last Friday) and I finally got to meet our expat Britt Green, and I'm expecting to see him here for a game of Frostgrave soon. We all had a long chat with Sander and Jan-Willem about wargaming, cultural differences between the EU, UK and USA and of course ze war.

And then it was time to go home again. I arrived at a jolly place as a few of our friends had arrived to keep Kim and the kids company and we all had dinner together. I had a really nice day, I've got plenty of energy now to tackle the rest of the work tomorrow and get the new room done asap.

+Edit+ Almost forgot, earlier this week I traded some old metal nids (Hive Tyrant, Lictor, Screamer Killer, some Warriors and Hormagaunts for a brandnew box of this:
Talk about trading up :)
Gepost door Gunbird op 23:55