I survived Crisis....and got more then a T-shirt.

Well, I didn't get a T-shirt, just a L sized Plastic Soldier Company polo to fit over my XL frame. Talk about form fitting!

Kudos to the TSA. Antwerp is a bloody mess with roadworks everywhere but their FB page was up to date and markings had been set up at all the turns needed to get there. I got there at 9:00, and was fully expecting to have to set up shop like last year, only to find Will and Ross already having done most of the work. I handed over my offerings of Belgian beer and Dutch treats, put on my Polo and went to work, as the place was already packed with browsing shopkeepers, TSA staff and people doing demos. It stayed crazy busy till 13:00, with a small cue most of the time, after which it died down just a little. By then several items had already been sold out :D 20mm was in high demand this year compared to 15mm.

Around 13:30 I could go on my break and dropped off a prepaid package at Wargames Illustrated and then went to the Bring and Buy to drop off another pre paid package for Migs at a table manned by Brecht. I was told he was the one selling Warhammer stuff. Qua comedy hour with me having to ask at virtually every table if the person selling was Brecht, as everyone seemed to be selling their Warhammer tat :D Fortunately, a guy in the que overheard me and pointed me to a chap way in the back, which was Brecht. I was so relieved to drop that off as I could finally start browsing for myself. 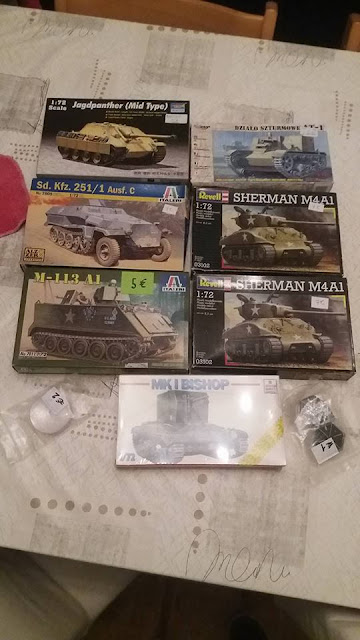 Not a major haul, but with an average kit price of 6 euros I'm not complaining. They are all destined to become wrecks (eventually) except the Bishop and the AT-1. The AT-1 I have been eying ever since Barbarossa came out, and I found out it had only 2 had been made and the project had been cancelled it 1936, but it is such a cute vehicle on the ubiquitous T-26 frame. Sadly, Ebay prices back then were a bit through the roof so this find was great! The Bishop I picked up cause it will go in the British forces for Afrika box. I'm normally not a artillery man (I feel it has no place on a 4x4 or 6x4 battletable) but I do like the idea of making this one day.

Then I started zig zagging the halls with my very tired legs to pick up the few pre orders that I had, and made 2 impulse buys, a TT Combat Brownstone for TNT and a full set of 20mm DAK tank commanders from Adler (new releases). The pre orders were a upgrade pack, 2 vehicles, 3 boxes of scenery and some more weathering paints. The grey blob in the lower right is a pre release cast (well, castst) I got from Ywan and that has just become nr.1 with a bullet on my painting list. You'll see. (also nice to put a face to his name....it feels like I had been talking to him for ages and I've never even seen the guy till today, and his simple rules mean so much to me :D ) 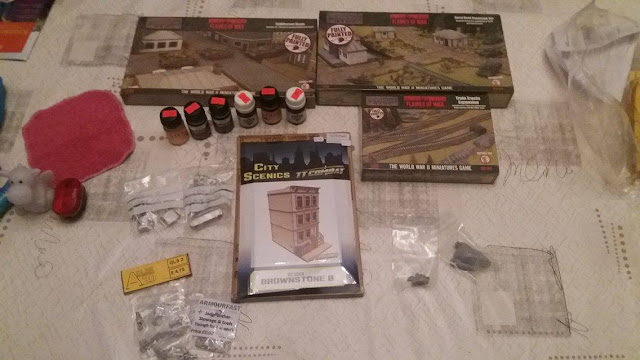 Sadly none of the shopkeepers who had FoW scenery had the railway track. I had pre ordered it 6 weeks ago but the shopkeeper had been unable to get it from the UK. Cue meetings with all of the shopkeepers who sell Flames of War. Answers varied from "Leave your adress, and I will see what I can do" to "Battlefront are scum and we will drop them next year". The general concensus was is that they aren't the best at keeping promisses. But yeah, I need those tracks, so I put out some feelers for 1 or 2 boxes. That should last me forever.

Around 16:30 we started to pack up, I set aside some boxes that I would like to purchase (sadly for me, by then the 20mm Blitz truck had been long sold out) and the new Wacht am Rhein book.

When we finished packing up, Will and Ross thanked me for all my help, all of the beer and treats, wished me a belated happy birthday and Will said, let's do the math on what you want. Here, this pile is a birthdaygift (stack of boxes). Yeah, this is a birthdaygift too (another stack of boxes). These 2 boxes have been opened so here, no charge (we really wish people would just ask us to see the contents instead of tearing open the boxes......Will can't sell them if they are torn open.) Hmm, what will I charge for this pile of boxes? I'll have to deduct that from your wages, young man. And hands me another pile of boxes and almost my full wages. Also I'm practically ordered to come and work for them next year, something I am happy to oblige. 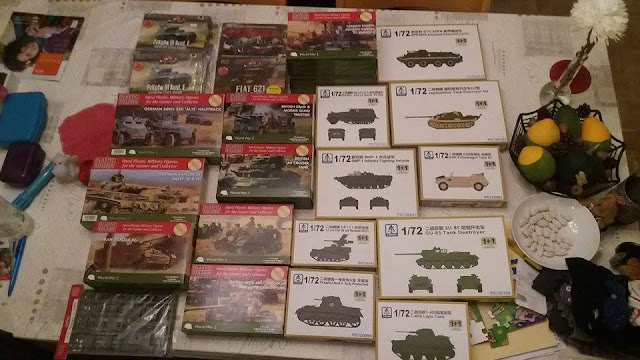 Yeah. Missing from this picture are 2 more boxes and the Wacht am Rhein book. Cripes, that is a lot of stuff.

I really like Will. No, not because of the gifts (well, it helps) but he keeps rehiring me every year, he knows I just like to work and sell stuff, i know almost the complete product line by heart now, and trusts me enough that he will go on his merry way sometimes and chat with fellow shopkeepers and leaves the shop to me. If only I had a every day boss that would do the same. <sigh>

With that, the long haul back to Holland started.....almost felt like I was migrating! I managed to work all day at Crisis without once sittin g down, and while my knee and feet are now killing me, I'm glad I can still do it. Sure, I'll be pretty dead tomorrow and maybe even sick for a couple of days, but it was all worth it.

Tired as I was, I just finished hanging the laundry, cuddling Emma 4 times and she kept crying for Kim (who is out for an evening of Christmas card making with her sister) and she toutched my heart when I asked her if she missed me much today and she just smiled , said yes, and then hugged me and pulled me into her crib at the same time and didn't want to let go either! And we repeated this 2 more times within the hour till she finally fell asleep.

And why not, I thought, lets clear the boxes from the living room and put them where they belong. 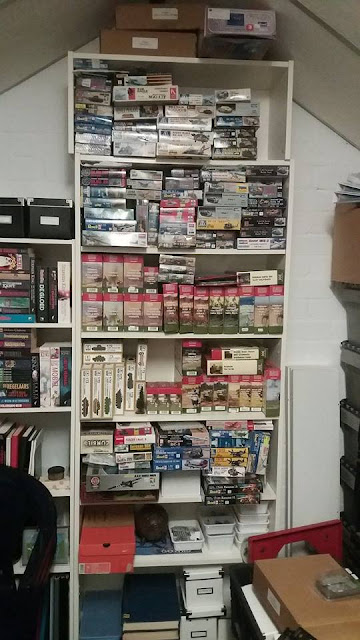 I think I have more PSC kits now then the average shop..... I swapped a box of modern kits last week for 2 boxes of WW2 kits that should be in next week and after that I'll sort everything into Early, Mid, Afrika and Late war piles (for the Germans that is) and I really want to start painting again.

I'm not ending this on a high note though, due to 2 things. 2 Reservations of 60 and 70 euros each had not been picked up, and to my dismay I found out I had no Internet in Belgium (I had checked last week and was told it would not be a problem) so I could not send a message to the 2 individuals.

When I arrived home I paged both, and both had managed to "forget" that they had such expensive reservations. At least one of them was so nice to ask for a shipping quote to get the stuff, but the other chap said sorry and after that I got no more replies.....which pisses me off even more as this stuff has been reserved for more then 6 weeks now and I had other buyers for it then. Oh well, live and learn. I still managed to leave Crisis with more money then I entered so Kim is happy.

Second item is that a felow blogger listed only as Blogger ( I kid you not) has been replying to new and older blogposts of mine with adverts for cheap sigarettes, soda, greencards and links to websites that help you make money off your Blog. I've been deleting around 5 of his posts....well, spam really, a week for weeks now and I just filed a complaint. I'm also thinking of setting my comments to moderated so this shit doesn't happen anymore, but not sure about that.

No pictures from Crisis from me sadly. I barely saw more then a few tables, heck, I barely saw what most shops had for sale .....and that only saves me money so it's a good thing! I'm sure plenty of people will Blog with pictures of Crisis and the pretty tables.

Now, I'm off to bed for a loooong sleep. Well, untill the kids jump on the bed anyway.
Gepost door Gunbird op 23:26