No Blog for a week? It's almost like I have better things to do :D

It's been another rollercoaster week as my brain is starting to normalise (which in my case means a wavepattern of happy moments and sad moments.

Sad moments included:
In the train back home I recomposed myself, put the Black Dog back in its kennel, and looked at my options. My social worker was the first to call me back as my short message full of despair had deeply worried her, we discussed plans for the rest of the day (basically go home, relax, have a drink and talk to Kim, and have a relaxed evening out as the meeting with UWV actually took place on Kims birthday. Also I was told in no certain terms that any future meeting with the UWV, I must be accompanied by either her or my councellor, as clearly the UWV isn't getting the message about my condition.

So, to stay motivated, I spent some time this week up in the attic. And I found my box full of British! 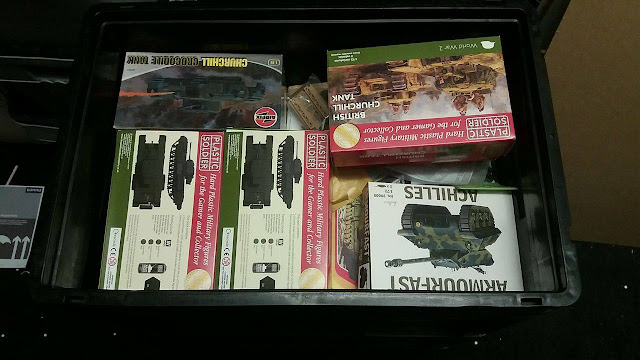 I can now grab 2 boxes of carrier and 2 boxes of M4A4/Fireflies and put them in the project box.

Today I finished putting (almost) all of the boxed kits into the cabinet. I'm missing 2 or 3 boxes with kits in them, and I think I have about 6 cases with nothing but bagged unboxed kits in them. And yes, that means I have more stuff then the average shop. So sue me. 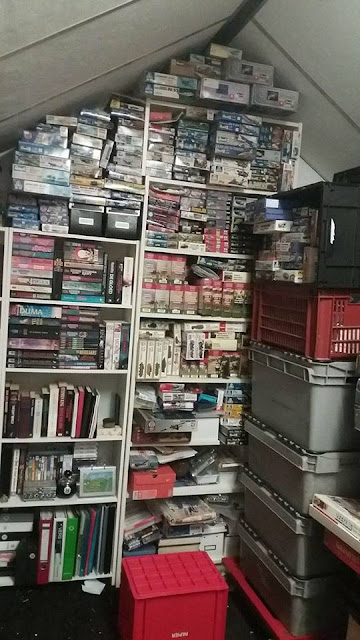 Technically, finding a nother half width Billy case would be ideal to sort all of it. Realistically, alot of what you see there has to go as well, either by building it or selling it. Which means getting my ass in gear and start doing stuff.

Which involve selling this lot to add funds to Paypal and my own account. 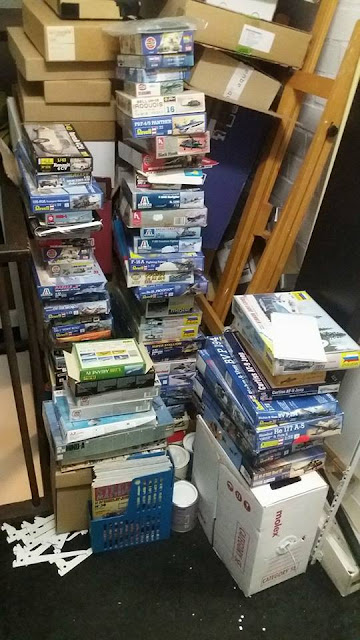 Also, I have been doing some shopping. I picked up some items suitable for the desert like a Airfix 40mm Bofors (also suitable the BEF and the rest of the war) and a few sheets of decals. Also arrived (and arriving) are more boxes of Battlefront scenery. I received a 2nd box of rail track and rail track extension, and have 2 more boxes of rail track extensions on order plus a cobblestone box and a swamp box. If you would have asked me if I had bought these before Brexit, the answer would have been no, as it is just too expensive, but with the Pound having taken a nosedive and knowing certain UK shops that ship for free it has sudenly become much more affordable. The fun part (for me anyway) is that when everything has arrived (and with everything I mean the railtrack, cobblestones and dirt roads) it all neatly fits in a 3 drawer Moppe so storage and labelling that will be a breeze. When everything has arrived I'll add a light drybrush to the bits to make them stand out a tad more, and I'll mark everything with a white or silver permanent marker on the underside like I mark all of my stuff. Can't be too careful these days.

My last bit of the day is that I want to congratulate the employee from Yodel who managed to relabel my signed for package from SE6 1AP London to  S66 1UB Rotherham by adding their transfer label straight across my packing label, completely messing up the adress, then keeping it in a depot for a week and sending it off to someone who gladly did not accept it. I'm not quite sure how in this automated day and age they managed to cock that one up (after peeling back all the labels, my label appeard in mint con dition, no tears, rips, smears or what so ever, perfecly legible in large script), but I was pleasantly surprised that even with this, PostNL was still able to track and find the parcel, ship it back to me (well, all my packages do have a rather large return adress in the top left corner so no rocket science there) and will even pay me back my shipping costs in full, meaning I can send it on it's way again next week, back to the UK, this time in a even larger box to make sure there is lots of room to put their oversized labels on. And also send it signed for again.

Right, time for bed. Tomorrow the girls will come home again and I have missed them dearly. It's also Kim's real birthday party so there will be plenty of friends and relatives around, sunday we will have a nice day off. And next week I'll make that list :)
Gepost door Gunbird op 02:01