...is what you get when you drink from one of these in FA:3. Fire hydrants. 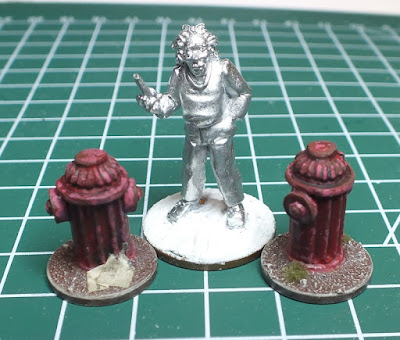 I picked these up recently when Black Cat Bases was having a 20% off sale and it and the rest arrived within 2 weeks time. I had some issues with the casting quality of some of the pieces so these just got based, basecoated and set aside till I had heard from them.

FFW to this monday, a reply from Jo with an explanation for the quality, a Sorry-note and a very generous offer for my next order which I would like to try and make before April if funds agree (and Kim of course)

So, mondayevening they get paint and there is not much work to them. I had removed the mouldlines as good as I could, and they are not the best of casts, but for fire hydrants, they will do. It is not like I need loads anyway! 2 coats of varnish lastnight and a bit of tuft and newspaper today and all is well.

Something that really cheered me up (more about that later) was a small box from Germany, from DELTADOG over at the LAF 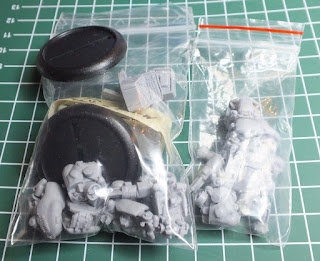 In it are 5 FA Desktop PC's, 2 FA 4 Sentry Bots and 1 freebie, a locker, that can actually open! I will do a review on these asap, as I want to get these built and ready and because they are great sculpts with hardly any flash. And cause he asked me to :) Same goes for painting them (which, as I don't own the game, will involve quite a bit of Youtube and Google to get enough shots of them so I can copy that)

Does this mean all is well in the house of Gunbird? I wish. Currently on antibiotics cause I had this cough that after almost 3 weeks with heatspikes and general nausea just didn't go away on its own and was interfering with the healing of my bruised ribs. All of that combined had my doc worried so here, have some pills. Also, my right shoulder and left knee have now been taped by the Fysiotherapist to restrict movement to speed up the healing, with plenty of excercises to keep them going for as much as possible. Sadly, my knee isn't cooperating so I was told today to only walk on flat surfaces, no kneeling or putting my full weight on it, period! And preferably no stairs too, but taking 1 step at a time and going at it slowly is approved else I can't make it to bed. Spent most of the past few days in bed feeling miserable, and worrying a lot about my job cause it has been 5 weeks now since the accident and I don't want to lose it :(