Increased the spectacular factor of the ruin by adding bright orange rocks and pink big grains of sand all over for rubble, making sure to leave places clear where I want to put miniatures or stuff. 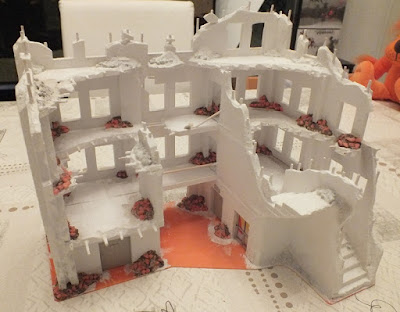 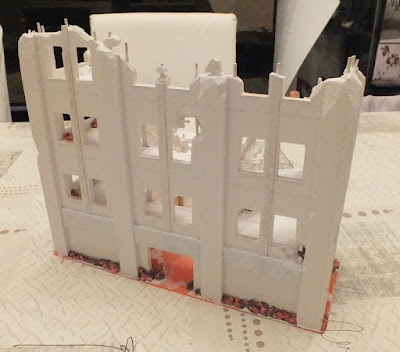 I did the borders as well. I can always make rubble piles to slide up against the walls later.

Also, played my first game of Frostgrave since November I think? I'd been guiding games at my house, which is fun, but playing is more fun. My Necromancer did rather well till he got mauled by a couple of marauding wolves that bit him for 13 hitpoints. With 1 life and 1 action he managed to Leap to the top of a tower, and my opponent instantly attempted to Push him off (but failed, even when I rolled a 1!). Erik, you bastard.

Anyway, I made myself a promise that for the time being, each game I play, I will try and paint all of the monsters that show up (if they are in my inventory or if I can trade them with other people). So for this time I'm supposed to paint up 2 armoured skeletons, 2 wolves and 1 ice toad. Skeletons no problem, I traded a second hand mostly basecoated and on the sprue undead army a while back, and I found some old Games Workshop wolves in my stash. I'm stumped on the Icetoad though, I know of a few nice ones but can't afford them at the moment. Maybe when Erik buys some more, I'll order some with him, if I can sell more Epic that is. Currently 12 euros in my Paypal left as I had to go out and buy new Matte varnish, as the pot is getting way old and it is almost impossible to stir properly. I'll also need to replace some Vallejo paints that I use a lot, notably Flat Brown that I use for all of my basing.

Anyway, here is a shot of the skellies and the wolves in their unprimed goodness. 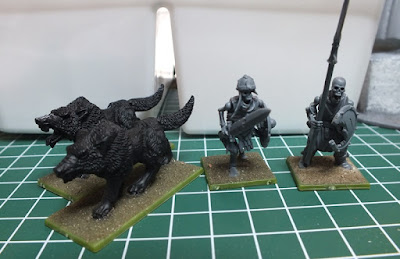 I based them all on thin flat bases, I don't like the GW plinths. 1 of the armoured skeletons has the body from the Frostgrave soldiers sprue and this works very well with the newer GW Undead. When the glue and basing stuff has dried (meaning tomorrow) I'll sculpt some tatters on the shoulders of the soldier conversion to blend the arms in, and then they will head for the painting line next week. There's no particular reason I went with squares btw, but I can't find the round 20mm bases I have *somewhere* and aquare fits just as nicely with Warhammer Quest so no problem there.

I've also taken up a comission of sorts to trade a lot of Post Apocalyptic miniatures for 2 painted 40mm objective bases for a "Mad Max styled game". I'm thinking water and gas canisters, maybe a Raider idol/marker, not sure yet, I'll cobble up a few things and see what he thinks of it. Will be fun to do, and a good investment to get models to go with Fallout as the entire lot seems to be made up of Raiders.
Gepost door Gunbird op 22:05