Well, that was another cracking game of Frostgrave! I'ne never had to use so much life to succesfully cast spells, but managed to roll a 20 in seperate combats, one of which had my Infantryman slaying Eriks Wizard in hand to hand 8 inches from his table edge (it was a long walk). I changed my tactic to a more offensive one, changing only 1 spell but keeping the rest. I used enchant weapon on my archer and infantryman and Fleet of feet on my Tracker, making him move 9 inches and keeping up with the warhound. That one is turning out to be a bit of a bust, I use it to tie up his runners but in 2 games it just died in a single round of combat. I did manage to raise a zombie, who actually held treasure in the last turn 5 inches off a table edge.I even managed to cast Bones of the earth on a wild boar that showed up in the ruins, managing to at least slow him down a bit. This means I will make a counter for that too. I losta Warhound and a tief but managed to kill Eriks Wizard AND Apprentice....nasty. Eriks telekinisis spell was particularly annoying, managing to drag 2 treasures  away from under my nose. In the end I claimed 2 treasures to Erik just one. This game took 6 turns and was concluded in 90 minutes. Sadly Erik arrived a tad late so no second game could be played (he was really tired anyway, he's got as much stress as I have)

I'd also like to try and paint up to 2 members of the warband, either the tracker or the 2 archers.

Some shots of the table: 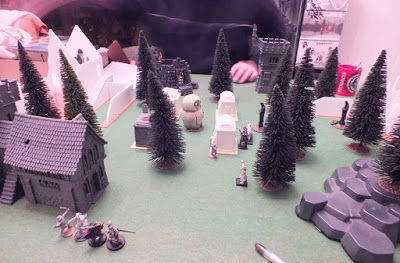 My opening move - spread out everything! (not the smartest thing to do....) 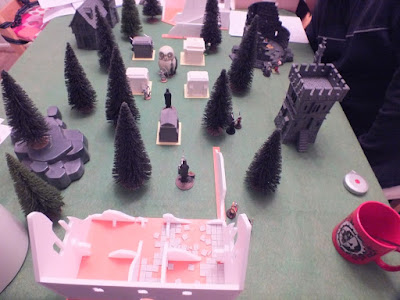 Lots of places to hide, took me 3 turns to spot one of his team hiding in the thick of a tree! 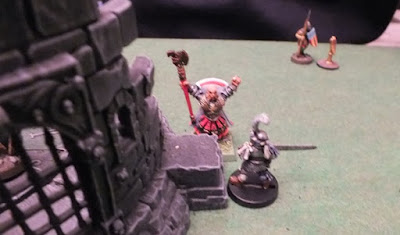 The enemy wizard moments before feeling the power of a natural 20.

I based all of the crypts so this week I can fine sand the edges and base them and maybe even get some primer on them. I'm using them a lot as they give good cover, so they deserve to be painted. The ruin on the table edge in the middle works quite well as wandering creatures appear from it. It feels more....natural.

Now I'm beat. But happy :) ANd I have 2 weeks to paint the monsters and maybe some of my troops, as next weekend is Poldercon, and I'm sooo looking forward to that :) :) :)
Gepost door Gunbird op 23:06