A tale of wolves, skeletons and landmines

My fever seems to be gone so I finished what I had on the table. First up:

2 Old Plastic Games Workshop wolves that have been in my bitsbox since about the time I started doing GW games back in 1998. Rebased to smaller (and flatter) 45mmx20mm Renedra bases that seem to do them more justice. Didn't bother with greenstuff to hide the head-body join, these were quick paints to see if I could still paint figures (instead of all of the objects you have seen me paint). Grey basecoat, black wash, grey drybrush top down on most of the body and a grey+white drybrush over just the tops. Bone teeth, white and black dot for the eyes. Sure, the newer GW Wolves are much nicer, they also cost money and I had them in my bits box. Use and be happy with what you have. And these will work perfect for Frostgrave. And Mordheim. And whatever game they can appear in. 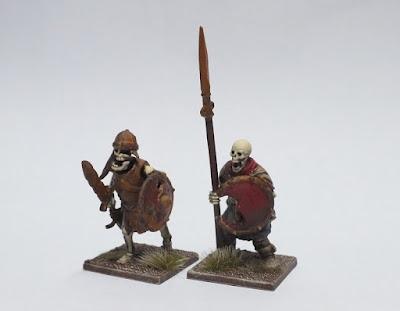 2 Armoured skeletons, the left being the newer Games Workshop skeleton, the right a mix of parts from the same Games Workshop sprue on a Frostgrave body. I can't remember having painted undead since at least when Mordheim came out, so I just looked at a few videos to get ideas and went from there. Bone spray, Deval Mud wash for the base, Vallejo Dark Sand overall, Vallejo Pale Sand highlight, done for a skeleton....I don't like the bleached skull look. The only ones I ever saw like that were the ones my fellow students bleached for their own collections, the sand colour is more natural. I've always used red a binding colour for my undead and I don't see why I should change that now. Red with a Devlan Mud wash to make it grimy. Undead don't wear shiny clothes. Undead being....dead and I doubt they give a damn... Weapons and armour went through a few trials untill I settled on just washing it all over with a brighter orange mix and calling it done. I'll go over that particular process again with the next lot, and do it better. Or different. Or the same, who knows. The weathering on the shields worked particularly well I think. Other then a few speedpainting mistakes and general sloppyness, I'm moderately happy with them. I know what look GW tried to create with the left ones skull but my painting makes him loook stoopid. Oh well.  Hey look, 2 armoured skeletons for Frostgave. And Warhammer Quest. Done. 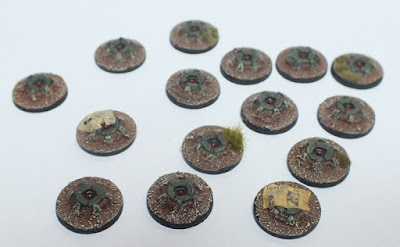 15 landmines. Not much to say about these, I started them back in It's a Trap! (October!? Time flies!)
Army-ish green, Deval Mud wash, red trigger, normal basing style dusted on the ends of the mines. Mines themselves are Oyumaru moulding copies from the launchers op top of the Furioso Dreadnaught....I thought they would make great mines. Sue me :) Added some small tufts to a few, and newspaper bits to two more, and left the rest bare. They are going straight into my counters box. Will work fine for Inquisitor, TNT, Necromunda. 15mm round 2mm plywood bases that are sadly no longer available from Fenris Games. Damn, I like these. Might have to go 2mm MDF now.

Right, now all I need to finish is the 3 Cars cars I'm working on, and then I can put some primer on new bits and get working on those. And repeat. I have a game of Frostgrave scheduled for thursday evening, so I'm looking forward to rolling up new monsters. Or more of the same. I don't mind painting the same stuff again.

No progress on the Wasteland Ruin. Right now I will finish painting the inside grey with a sponge too, and then call it a day, maybe paint the doors and tiles etc, and just game with it. And start the other bits for the square, and do all of the additional weathering atc at the end, with a broad brush. I've been staring the damned thing to death for the last week so it is better if I take some time off that particular ruin and get started on a new ruin. Something more suitable for Mordheim. Or dare I say, Frostgrave?  Yes, that sounds like a good idea.
Gepost door Gunbird op 21:59