First up, I'm having a good day, so I cleared the jumbled mess that was the front attic, broke down all of the larger boxes, tossed the broken ones in the recylcing bin and made sure what was left (and will be needed to ship stuff) was put away neatly(ish). 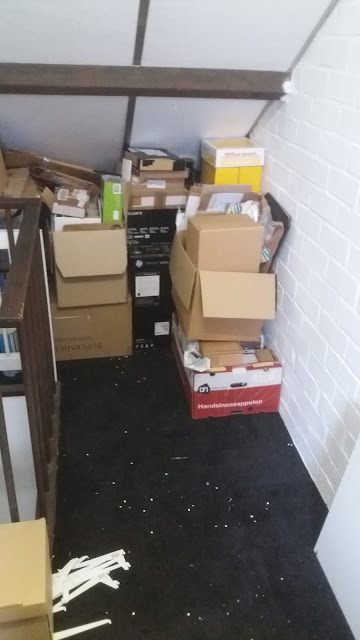 This morning you could not see the floor and it was stacked with boxes and filler material up to the roof. So yeah. I then labelled the first row of boxes with a numbered sticker so Kim can follow the progress more easily when she is up in the attic. That is the first part of my hobby chores down, so now I can grab crate 1, sort in sell/keep and trash, and continue. The plan is to do 1 crate a week minimum so it would be roughly half a year till I have checked and cleaned every single one, with a few to spare, but quite a few crates have very little or non hobby related content so I think I can progress faster then that. Well, best laid plans and all that, so caveat empor......

The now cleaned area will be used to put the stuff I want to take down to sell. (not all at once mind you, just grab this and that and keep listing stuff every night for a while. If I would try to drag a full crate down the stairs with my knee as it is, the next Blogpost you would read would be my obituary, and that would seriously piss me off :P

But this Blogpost is not about that. It's about First to Fight. A general overview and a order review sofar, plus some more samples..

Who are First to Fight? Well, they are a Polish company and they have a nice if wat unreadable website as the translator icon only seems to work for the shop part >> http://wrzesien1939.pl/ 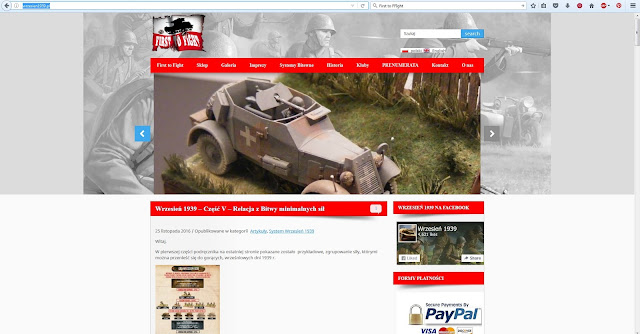 They produce kits for the German invasion period, with period vehicles for the Polish and German forces (and maybe Soviet ones too eventually?) and recently they have released a card based wargame as well that you can use their models for. They have a steady release of roughly 1 new kit a month. Each kit is a well detailed fast build kit in the geste of S-Models (if you have ever bought those).

My most recent order was made on the 9th of January this year as I got a reminder on their FB page that the 3 box discount was about to end. I received a email from them that the order was being processed later that day. Making an order is rather simple, you can just click on the items you want and they put them in a cart (pretty standard stuff) and then fill in your details and pay with Paypal (again, pretty standard). For this particular discount you have to select the discount option in their shop, select how many times you want to use their 3 for 13.99 euro offer and then process the order. You can use the note-boxes to fill in the code and name of the articles that you want. Easy- peasy. 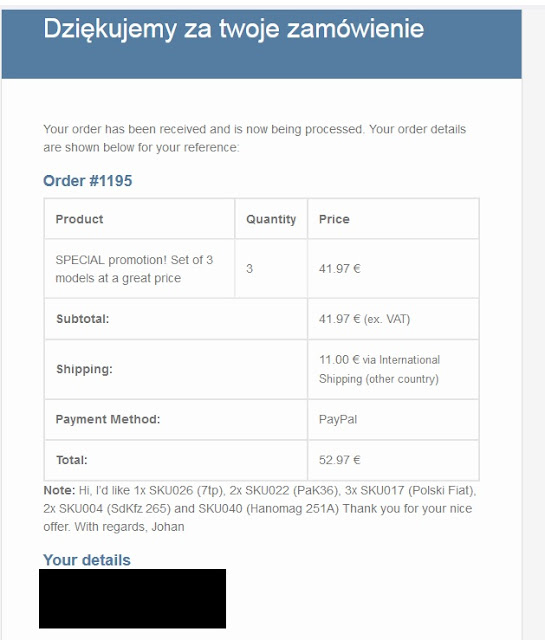 I've ordered from them 2 times now. Both times you get this email, and within 2 weeks you receive your items in a sturdy box. You can checkup your order online if you make an account, but the last time I checked was 2 days ago and it was still listed as processing. It arrived yesterday :D 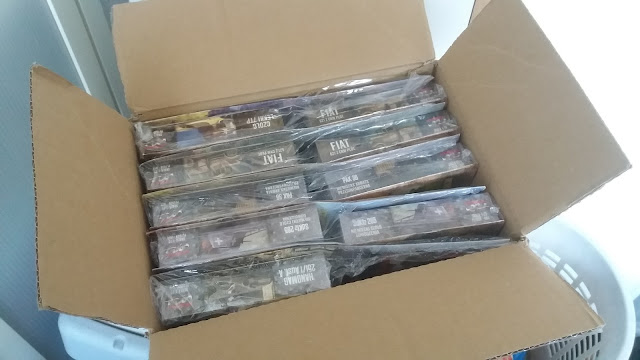 First to Fight doesn't just send you the kit. No, it sends a box with the model and a booklet detailing the vehicle in question and its use during the campaign.....sadly all in Polish. Very neat though. 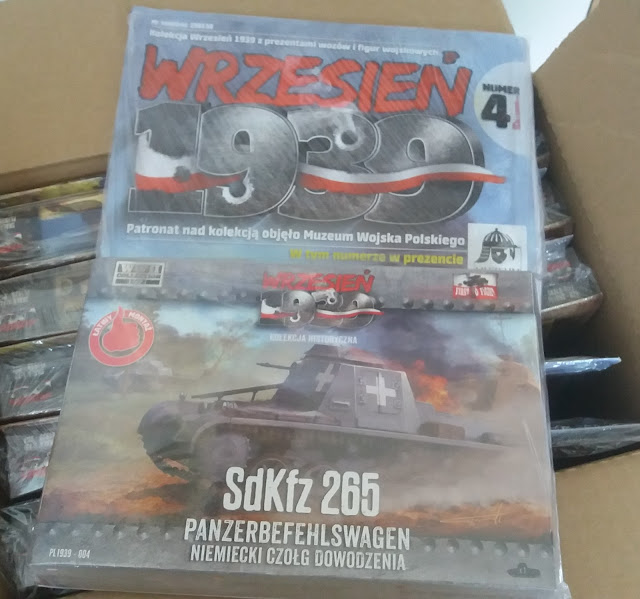 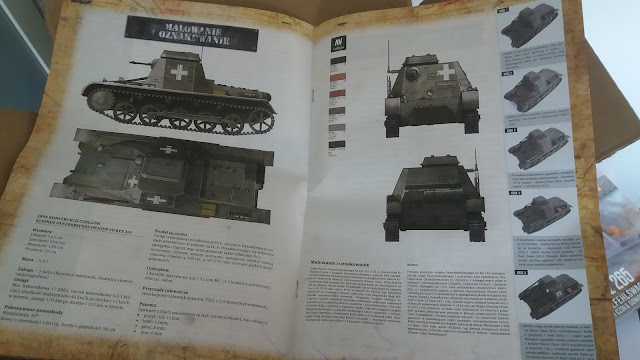 In this case we are looking at the 4th kit in the series, so a early release.

Basic Panzer 1B sprue, SdKfz 256 parts sprue, a vial of glue (long evaporated as mine was empty other then  a strong plastic glue smell), a toothpick and a decalsheet with 6 white German crosses. Highly detailled yet fast build. Only 1 nit picking point (well, 2), side hatch is closed version only (but can be cut in 2 and opened if needed), and no functioning top hatch so you are going to have to do some cutting as well if you want a commander in the hatch. Which adds some time to the build but is nothing earth shattering now, is it? Also, making the uparmoured variant for the French campaign is just adding a thin sheet of plasticcard to the front (or don't bother).

Sofar, they make 2 Polish trucks, one being the Fiat 621, and they make 2 variants....or do they? Kit 011 has a painting on the front of a truck with a tarp cover, and kit 017 has a open back with a MG mount. But be assured, if you are ever in the shop and want this truck, both boxes have exact the same content. 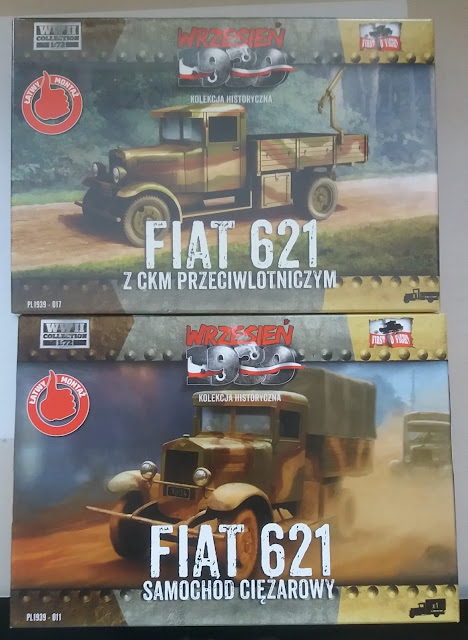 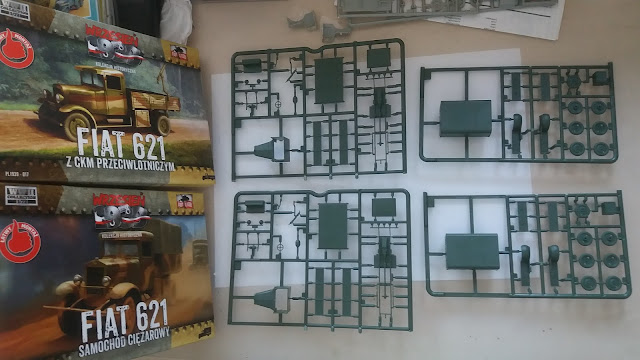 No more glue and toothpick though :) No decals either, but this problem has been solved according to Braille Scale >> Link so at least you have options. I picked these up for parts, wrecks and captured vehicles so no real problem for me. But FYI :)

Next reason for the purchase is the FtF PaK 36. I have a chronic shortage of these as the Matchbox/Revell Protze with PaK 36 hardly ever props up on our sales groups and for some odd reason people keep insisting on collectors prices for that kit so I own a whopping 1 (one). FtF has solved that problem by releasing this one, two in a box, with crew. 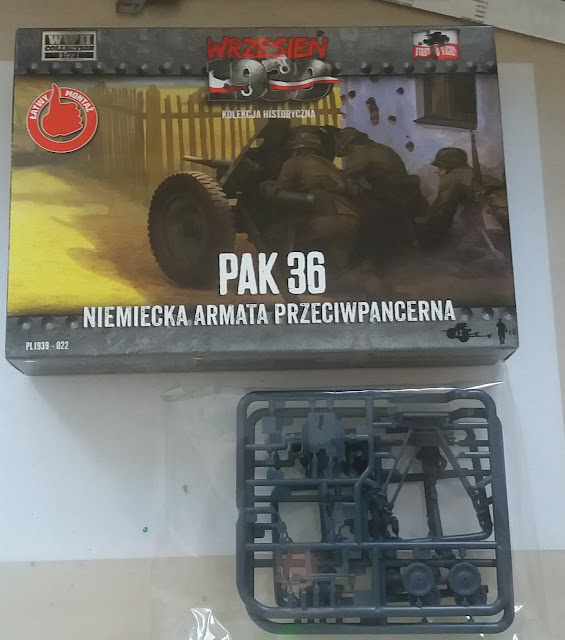 Even with 4 sprues in a bag, it must feel lonely in that large box. You get 2 crew sprues and 2 gun sprues.

Minor sinkmarks on the underside of the carriage....which you will never ever see, so no worries. Nicely detailed and thin shield, everything looks the part. To make a towed version cut off the legs and pin them in place or use another brand for it, whatever works for you. 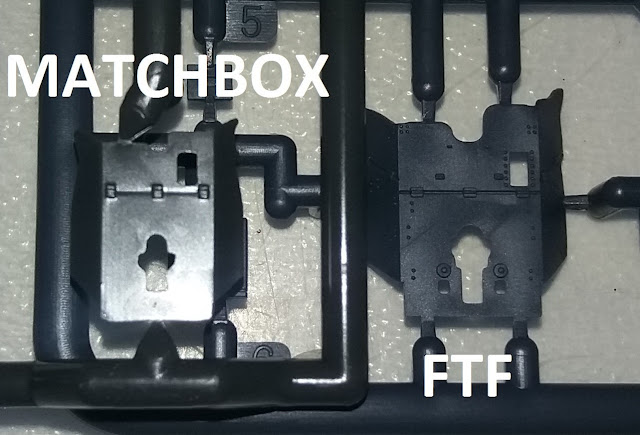 The Matchbox is much smaller (as it should be, being 1/76 instead of 1/72, but I wasn't expecting such a big difference)  and has almost no detail. 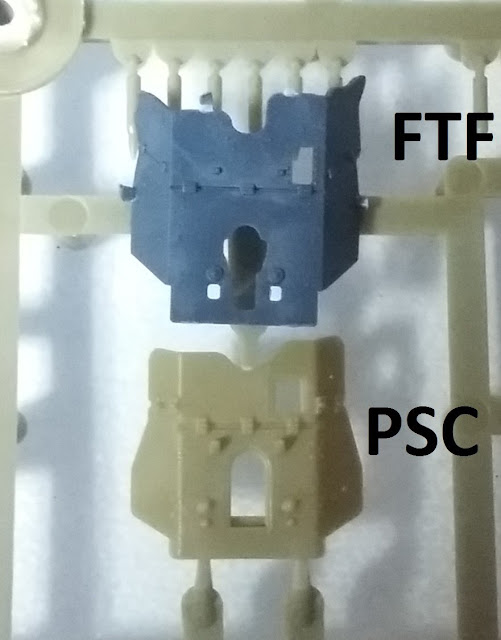 PSC makes the 37mm for the 251, which was unavailable atm, so I grabbed the 47mm Russian which is basically the same thing (is it?) and it looks gooed enough for government work :) (Edit: of course, when I'm just about finished I spot the 37mm gunshield on the 251C. It is only a teensy bit smaller (yes, that's a measurement) then the Russian 47mm shield so no problem.)

The crew.......yeah, about that. I don't buy plastic kits for the figures. Never have, never will. Me and plstic figures never seem to get along, and this one is no exception. This is much softer and bendy plastic (not as bad as Revells Gay Gunners (their 105mm gun kit with horses) or HaT stuff though)
Well, they will go in the spares bin or I'll sell in a lot with my surplus PSC guncrews.

Next up is the 7TP tank. I picked this tank up, not for the Poles, but for police actions against Partisans in Eastern Europe. 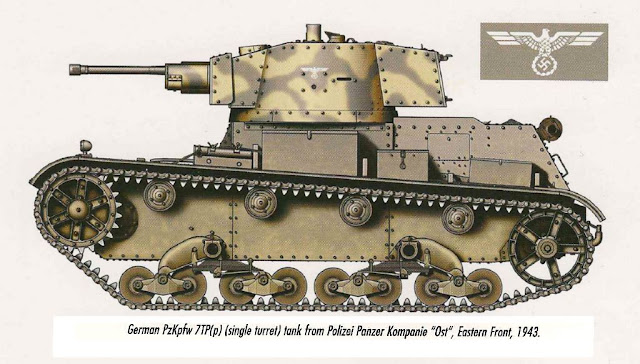 Finally a tank kit that fits comfortably in the box it is shipped in :D 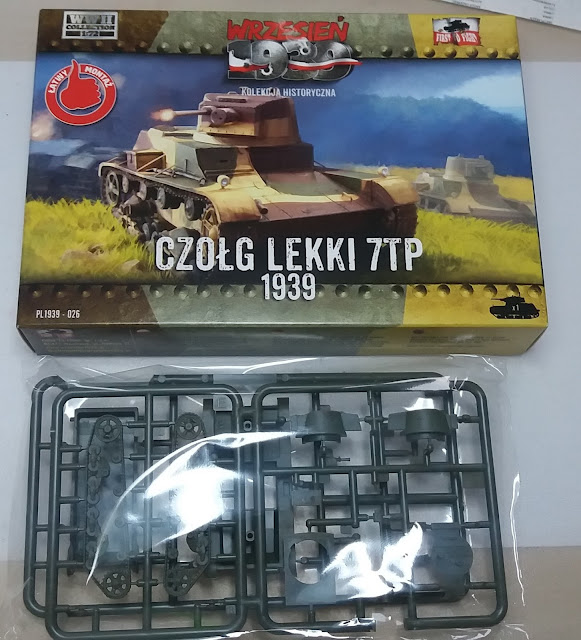 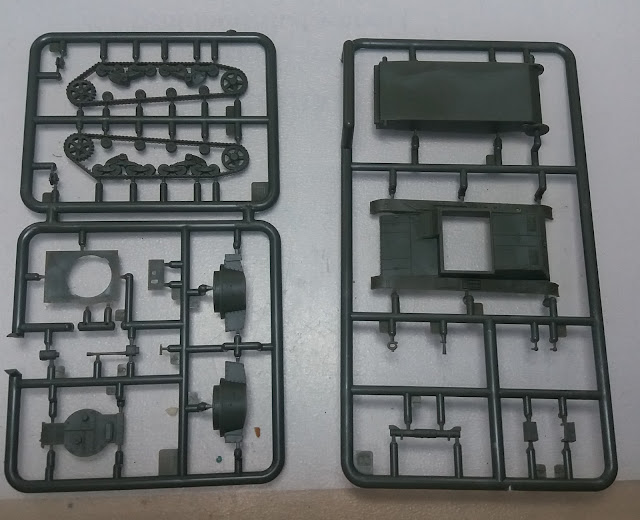 Again, not too many parts. Again, no opening turet hatch but nothing that can't be sorted with some minor cutting work. Since I don't own any S-Models or Minairions T-26, I cannot compare the trackwork to those (everytime its Crisis they are either already sold out or sell out during the show), but I can compare them to parts of the UM kits. 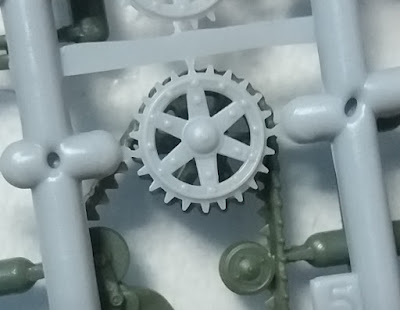 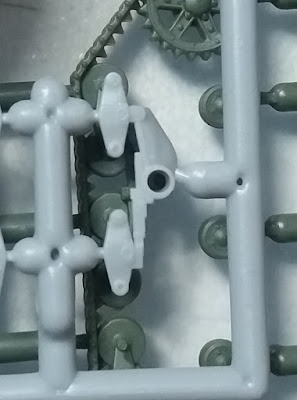 UM in grey, First to Fight in green. The differences appear to be miniscule (good!). This means (to me anyway) that in theory I could use the basic chassis to build the UM AT-1's and not have to spend a lot of time putting together a very fiddly undercarriage, but I will do some more measuring before I'll get to that. Then again if I could have easier acces to S-Models T-26's that might be a better option.

Last but not least., the SdKfz 251A. I picked up 2 of these for use as Forward Headquarters vehicle for France and Afrika, maptable and all, maybe eventually a third for the same goal in 1945 as a batterd survivor. Not sure if I want to pick up a frame antenna for any of these, but we will see 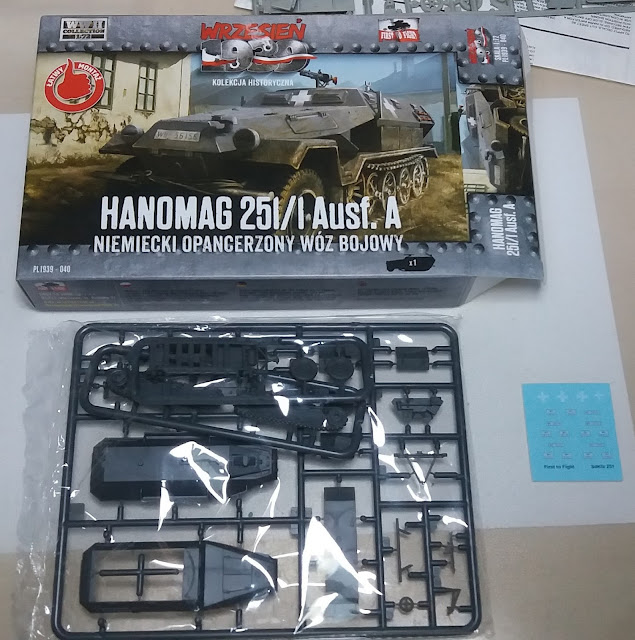 A nicely filled box, and as a added bonus decals for the Poland campaign and several WH licenceplates. As was expected the frame and tracks are seperate as they also do a SdKfz 11 now who shares those basics.

Now, I want to use these with PSC offerings, so I grabbed a 251C kit and snipped off the most important pieces so you can compare them. It's not perfect though (in which I mean my comparison, not the kit, that is gorgeous) 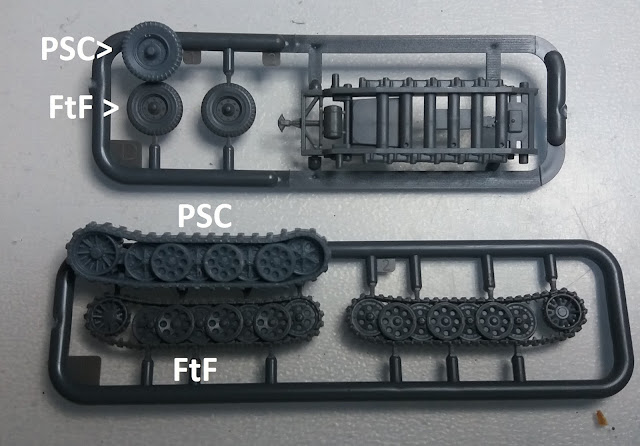 Wheels are only slightly but visibly bigger, and the same goe for the trackunit. 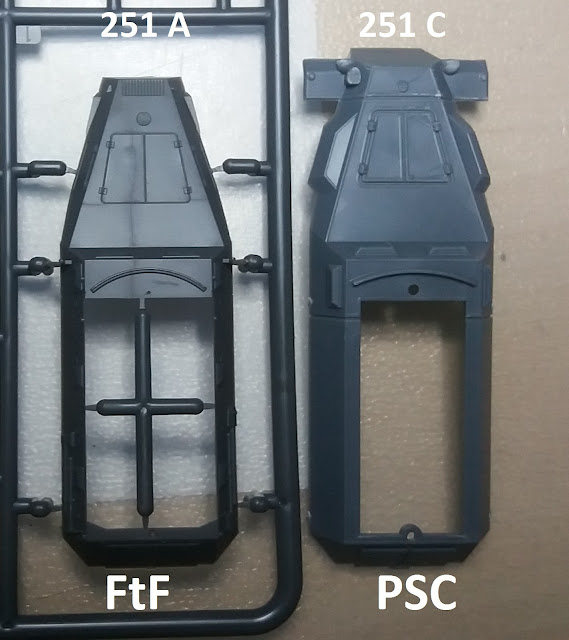 The PSC kit overall is a bit beefier, the FtF one is only a tad smaller, but the difference is almost all in the hood as both fighting compartments are about the same size.

Does this matter? Well, how often will you mix a A with a C or D? The B started production in 1940 and is visually not that different from a A, mostly confined to the nose and removal of the vision slits on the sides of the fighting compartment, so with some minor cosmetic surgery they are just fine for wargames purposes. Unless you are a purist but I highly doubt you would be reading a wargamers Blog to begin with? The C starts mid 42 so you are fine mixing them from that period onwards, but if you stick to the A (or modded to the B) for a command or radio variant and use the C's for the grunts you won't bat an eye at them in the field. At the table I mean.

Right, that is it for today. I'm very pleased with First to Fight as a kit producing business, they make some very fine items that, albeit it focused on the Polish campaign, have plenty of use outside that campaign as some of these items lived long lives well into the war. Service is fast, quality is high, shipping is more then reasonable The magazines are a bit useless to non Polish speakers other then pretty photographs and the painted example, but hey :) Taking advantage of the sale meant I paid just under 6 euros per kit, or under 3 euro per gun plus crew. For a pennypincher like me that is great value.

The upcoming release is the 4CP  halftrack unit and should be out soon. 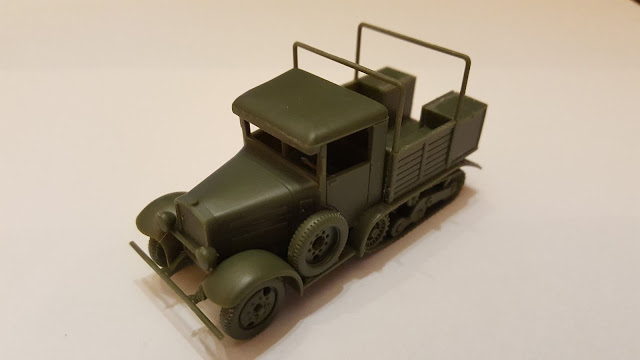 I'll go and enjoy the sunset now for a bit :) Till next time! 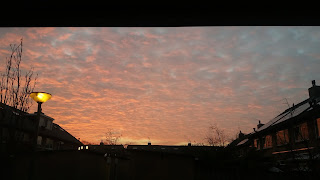