I've been spending quite a bit of time in the attic lately, clearing out boxes and sorting stuff into boxes labelled Sell, Store or Trash. Currently I have 10 boxes of stuff to sell, which will take me quite some time as photographing, tagging and putting it all online takes a shitload of time, so I just grab a few things each time I go up in the attic.

The boxes labelled Store (around 10 now) are the ones I focussed my attention on today, to see if I could sort some of them into project boxes. In this case, 1 project in particular due to the arrival of 2 Italeri Loaches from a trade, just for the minuguns that they have, so I can convert 1 AH-6 Night Fox into the twin minigun and rocket pod variant used by the guys supporting Delta in Mogadishu, and 2 others into troop carriers, with magnet swappable boards for versions with and without troops, and 3 of the (almost) correct versions of the Blackhawks (1 for a crashed model and 2 for dropping off troops. I actually have the correct model for the C&C bird as well but I've come to the conclusion adding that is a bit pointless due to the high altitude. 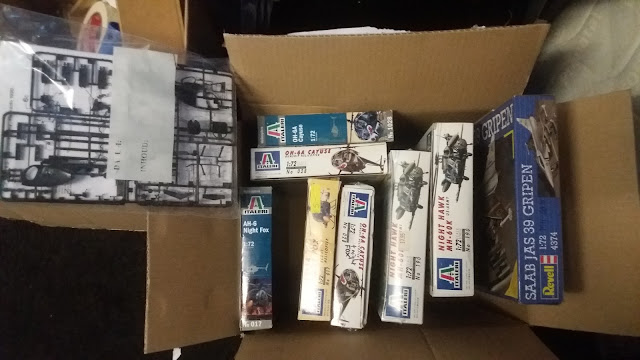 Going off this pic I actually have 1 AH-6 too many, but that will go into my 1982 Israel box as it comes with twin tow launchers, so nothing is wasted. With the 30 Delta's and the 40+ Ranger suitable figures I'm pretty much done for a raid. More suitable buildings are on the list, and when that is all done I'll get busy on the miltia and their assorted vehicles. It sure seems like a lot of work for a 3x3 table but hey, this has been stuck in my brain ever since I saw the movie and make some stuff for it :) Life's goals, bucket list, your call :)

I pitied the mailman this week, btw. 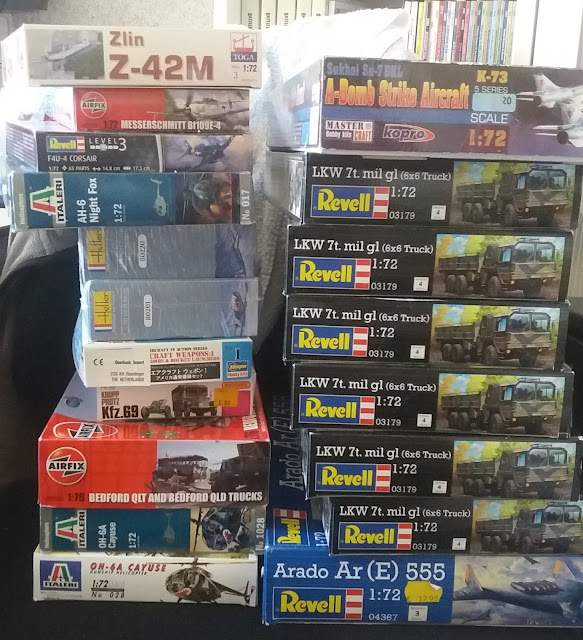 Zlin is a 2nd plane for the Cartel (for Black Ops games), Bf 109E-4 was a freebie, F4U-4 Corsair is for Burma, The 2 Heller kits are for Israel's earlier wars which aren't a high priority at all. More bombs because I like to load out with proper ordonance and the stuff that comes with kits can be iffy sometimes. My 4th Protze, that should suffice for a while. The Airfix Bedford double box, 1 is for a Late Desert 6 Pounder portee, the other as a transport for Overlord. 2 Cayuse just for the miniguns, and they can be made into civillian ones after that....would do very nice as a press chopper or a Cartel one as I will have rocket pods spare. Su-7 is planned for a Egyptian one vs Israel but also long term.
6, yes 6...., LKW 7t trucks. Let's just say I got a very good deal on these (even though I'm actualy actively looking for a 10t version to convert to a Iraqi mobile Roland). And last but not least, a E555......just for static display and a target for commando or resistance raids on secret German locations. That's my excuse and I'm sticking with it.

I picked up some stuff at Overloon too but that's for a later Blogpost.

Meanwhile, I've added a new Japanese building to my lot, a rather large rice storage. It came out nice. Just needs rocks for the roof but I still haven't found the correct container. 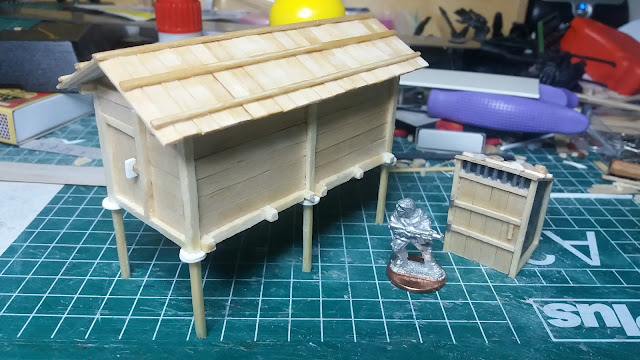 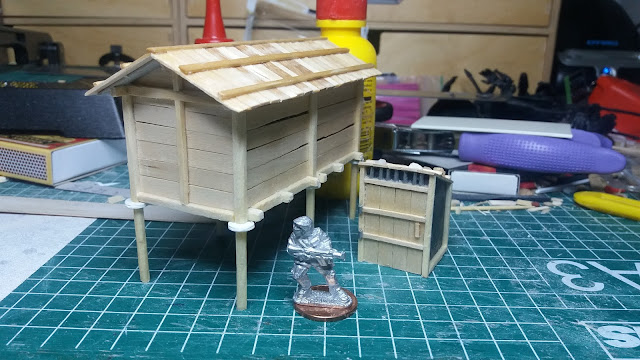 I'll make stairs for it at a later date.