"In the (Merchant) Navy" and some excessive brainstorming

This week I have been doing a lot of thinking (not neccesarely the smartest thing for me to do) about a few things, so I wanted to blow off some steam by making a Narco/Terrorist OH-6 with rocketpods. Oh boy, did that go wrong.....very thin plastic so it kept warping, very poor fit even after cleaning, and when I had drilled the hole for the flight base plug and surrounded that with Milliput to keep everything place the 2 halves refused to fit properly and the glue seemed to do nothing other then melt the plastic, but it just would not stick. Then I tried superglue and it only got worse. When I got in to my work space this morning I looked at it once and I could cry....the halves had come apart (again) and the top had set, but crooked.  Lot's of sanding and filler will be needed before this thing will ever become presentable. One of them days I guess.

Anyways, that is not what this post is about.

I follow quite a few blogs, some post frequently, others.....not so much.  Atm my focus is on games I can play with my existing collection and games I can play with a minimum amount of figures. In that vein, and because I rediscovered my 1/3000th fleet a while back, I've been looking at the Schnell Rules for Schnell Boote (thx to Jim ). The rules look simple enough, and when I last looked at Navwar they still sell quite a few torpedoboats that can be useful. 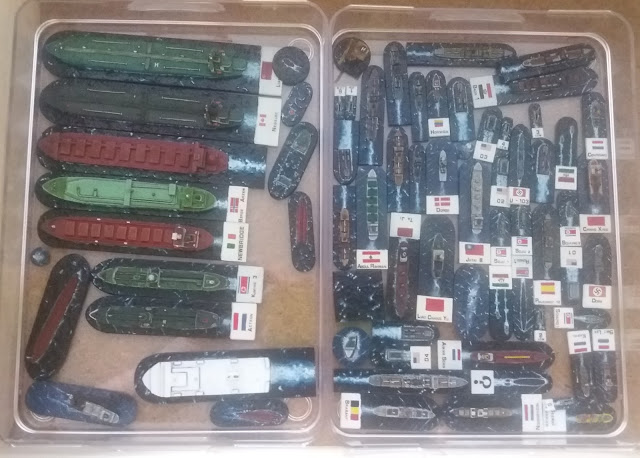 Wow, I sure did paint a lot of ships, didn't I? 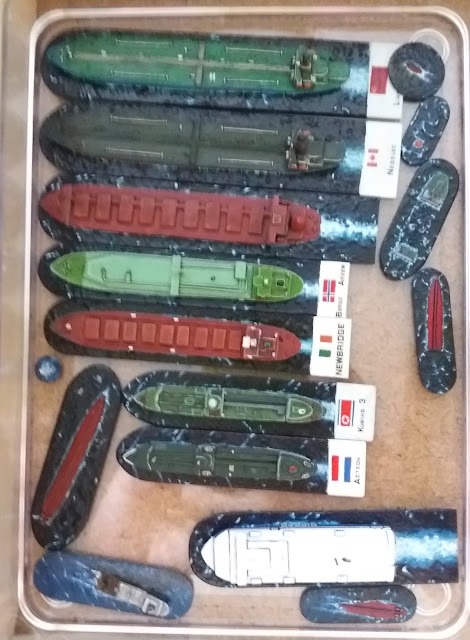 Mostly post 80's tankers in this lot, a couple of conversions and some sunken/sinking ships. They are good to go as they are, other then that I will be removing the nametags by cutting them off and stcking a label on the underside. I've noticed I find nametags in that way too visible and when I use datacards with a picture of the ship on it, they are not neccesary. 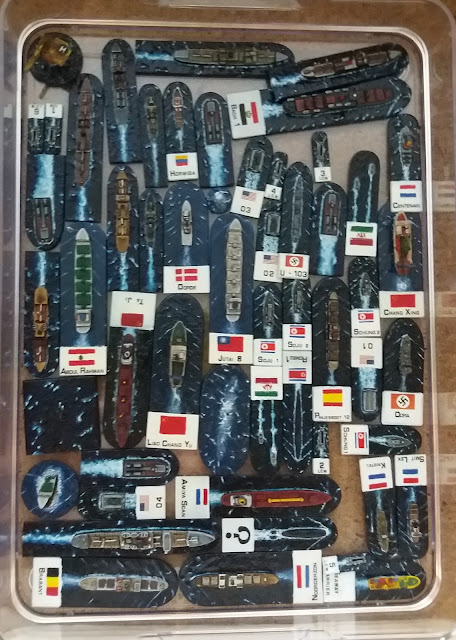 A real mish-mash of cargo ships, military ships and various other items. Again, remove (or paint over) the tabs, relabel on the underside and they are good to go. I'll just need some more tugs, cutters, small merchants and barges before I can get to work on MTB's. Anyway, they have their own laballed drawer now so when I have time, I'll get on it.

I'll be ignoring the 28mm elephant in the room and focussing purely on the 20mm one. I like scenery. I like making scenery. How can I make the most of the storage space that I have without making specific scenery for every single environment/war I'm interested in?

It's easier then you think. (Keep in mind that my perspective is a attractive table with little details that don't get in the way of the game but enhance it. It's the exact opposite of most Warmachine/40K tables, which are a affront to my eyes with a green pooltable cloth, a house, a mountain and some trees if you are lucky.). Ok, what do you see in almost every warzone since WW1? Wrecks, oil drums, barbed wire, roadblocks, debris, dead stuff, craters, and more recently, unfinished concrete buildings. Keep the basing to a minimum (like I always do) and generic colour wise and I should have no trouble fitting everything in.

So, after yesterdays failure, I decided to do something my Aspergers makes me perfect for......build the same damned thing over and over. 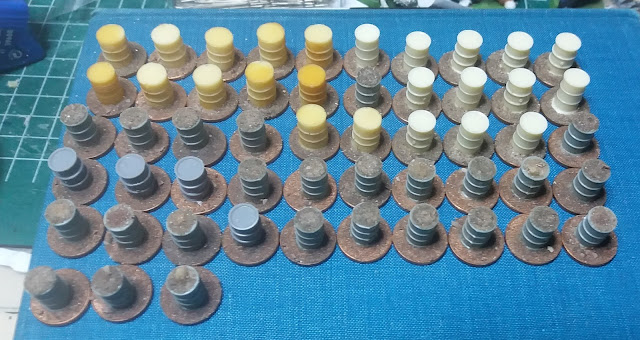 Crappy plastic ones from the Academy vehicles kit, topped with dirt for dirt filled oil drums. 4 crappy plastic ones from the Hasegawa Japanese truck but not as crappy as the other ones so they are ok. Both types ned to be sanded down for sprue lines. The yellow-ish oild drums top left are from 12 years ago when I got into this Historical hobby from a Ebay vendor (one of my first purchases) and they are actually knock offs (I had no idea back then) and a bit bubbly but they will work fine. The top right ones is a box of a dozen I got half off at a sale last year. I have loads more resin knock offs somewhere as well as a box of originals, and I'll use those when I will make battlefield specific markers, like ones with a roadsign for instance.