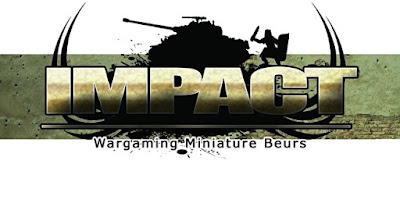 Just got back from Impact 2017. The venue was well packed with a diverse selection of traders and display tables, and I might be wrong, but with 6 euros entry it was cheaper compared to last year? I could swear it was 7 euros then. (though a few traders or clubs will be in for a nasty surprise as I spotted a few cars beside the venue that had been ticketed for not paying for parking - 63,50 euros each. Ouch! ). This year, you got a few tickets with your entry fee that would be used for the raffle, and every hour they announced new numbers for a free item. Really nice toutch! Als the goodie bag was well stocked with little items. A few candybars, a free mini from Warmonger Miniatures, some fliers for shows and discounts, a Warlord 28mm US Marines sprue and a nice sheet of pre embossed styrodur. And a resin base as well, but I forgot who made that (I gave it to some friends from Tilburg who actually use those).

Beautiful weather too (which can be a good/bad thing for a show) and with Kim taking the car and the kids to my parents, I took the train to Eindhoven and walked to the convention centre (it would be daft to have gone by car anyway, a trainticket costs as much as 1 hour of parking in Eindhoven, with fuelcosts on top..... ).

Anyway, a well packed venue, with shops in the outer ring and games in the middle. There seemed to be a bit of everything, with most popular games well represented by the shops but with loads of other stuff as well. After picking up the things I had pre ordered first, I browsed the shops for a bit and after that, the smallish Bring & Buy, which turned out to be the place where I was to spend the most dosh. After that it was nothing but pure eyecandy, lots of effort being put in the games and tables.

I had a nice and long chat with Sander at the bar, who had his 6 year old son with him, with a fine discussion over a Belgian beer (and a iced tea for his son) and some swapping of purchases and freebies as some of our interest overlap. When he went to get some final bits I had a lengthy discussion with his son about how Sander paints and how he actually paints quicker then his father, though not always with the desired result. Brilliant, if I can half of that chat with my girls when they turn 6 I'd be happy as a clam. After that they left for a trip to Eindhoven and back home again.

I then had a long chat with Ferry and his son Maarten about Gaslands, games development, the hobby online and how expensive life is :D Maarten left after a bit to join the scrapheap challenge, and after a bit we both had another small tour of the show, discussed the game Tanks! as being a nice game for him and his son and then we parted ways. I feel I will have to organise a evening event in Tilburg in the near future just for Gaslands, as Ferry and a few others are very interested in it.

Since I really suck at remembering peoples names if I only see them a couple of times a year chats can be a bit akward, as i never forget a face so I know he or she, I just can't put a name to them. It's nice to hear people have no problem remembering me or my name, my Blog and my work, so I must be doing something right. People were quite impressed with the Japanese buildings, which was nice, so I need to get that tutorial up next week.

I cut it short at around 14:30 as I really need to study for tomorrows exam, hence I'm now blogging at the ungodly hour of 17:00 with a sandwich at my side.

Right, the haul. Again, I have foccused purely on what I want to use in the very near future, and some bits I can resell or swap/trade with others. In the end, after expenses, I spent just shy of 40 euros, and when I sell what I don't need right now that should balance out nice enough.

In no particular order I bagged (and my apolagies for the odd angles of some of the pictures, these are all taken with my phonecam and those pics and the Paint software seem to be at odds with each other. I can save a picture straight up and it will show on its side or inverted when I upload. When I correct it in paint and upload it again it sometimes works, sometimes does not. Quite annoying but I don't want to shit here all night editing, sorry! Also, some pics are fuzzy, thats 100% my fault :D ). 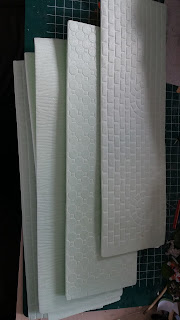 <Freebie> As most of my friends do no scratch build, the free samples of Styrodur all ended up in my bag. I'll put them to good use, want to have a stab at finishing the Japanese shrine monday or tuesday and these are perfect for that. 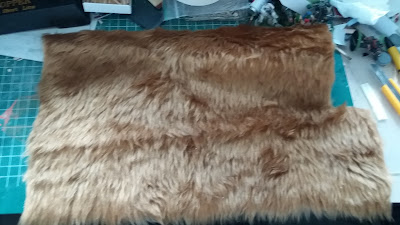 Shitty pic, sorry about that. Hans bought some zombies off me and gave me this skinned teddybearfur as a freebie to try out. Enough here for a small house and then some left over bits for some experimenting. He did mention though he prefers to use cheap towels for this as they are easier to work with. We'll see how this works out.... 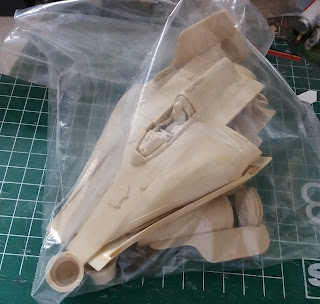 Second hand purchase - 1 out of a lot of many partially assembled/disassembled Star Wars fighters - this one came closest to 1/72 for me so I bought it. Landing gear is ripped off so will need some TLC, new bits and a new PJ. 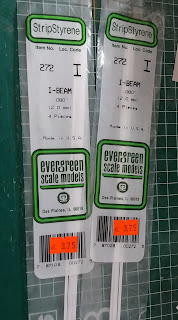 Damn you Paint program. Anyway, 2mm I beams to make Czech hedgehogs with. I've seen L and I beams used and I think the I beam is just a tad stronger in scale. Not sure how to bae them yet, in groups or seperate...... 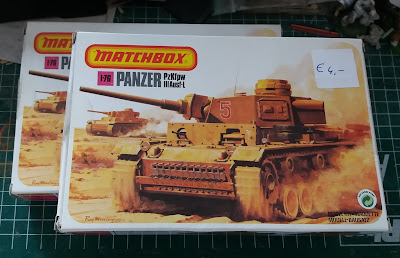 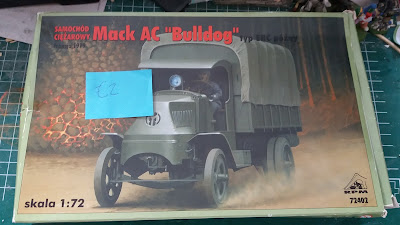 Second hand purchase - Ehm, late WW1 truck-thingie? Will be built as is and used as scenic piece for Pulp games in 20mm. 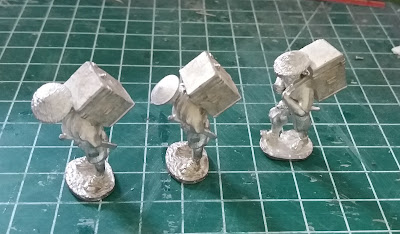 Second hand purchase - 28mm Perry Japanese porters. Now all I need is a merchant to go with them and they will make a great objective. 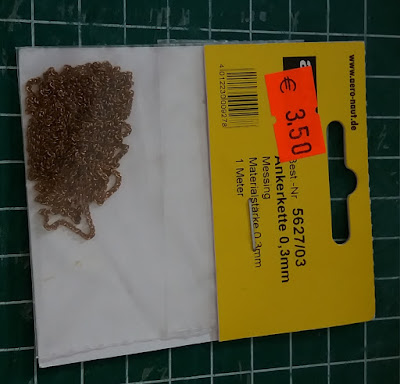 I don't think this needs any explaining..... Miniature SM dungeon you say? Nope, for adding to the front of tanks of course. 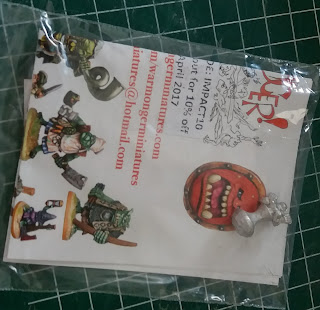 <Freebie> A goblin coming out of a pot and a shield. I traded the shield away and I'll cut the goblin from the pot. The goblin will then be sent off and I will keep the pot.

Very fuzzy pic (sorry about that) of a Copplestone spy, and a Northstar Police Oficer and 3x the Yakuza muscle for Big Trouble in Little China Pulp. All 28mm. 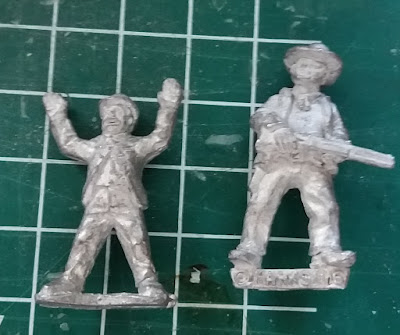 A cowboy with a rifle and one with his hands up. Just....because? I want to see if I can paint a cowboy. Just for funsies. 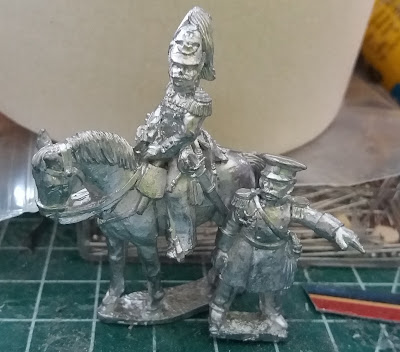 I think these are 28mm Japanese Foundry Officers? Well, they will now become statues in Hong Kong, for Pulp reasons. 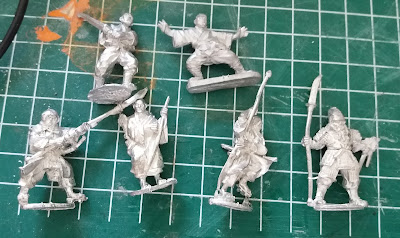 28mm Norhtstar and others Monks and a Samurai. 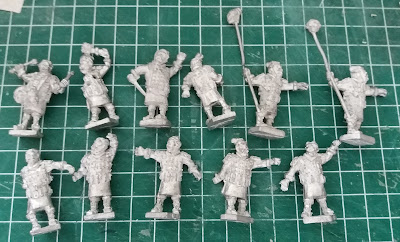 28mm Terracotta warriors. Either I'll use these for Hong Kong Pulp, or put them up for sale as they are OOP could help me with the finances. Not sure yet. 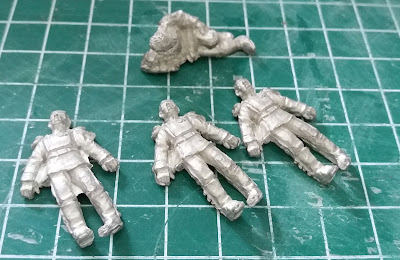 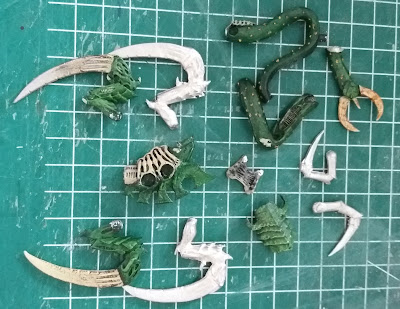 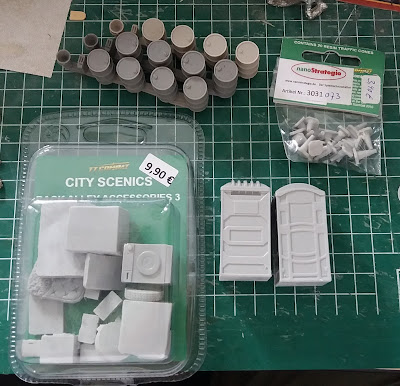 Resin 28mm scatter scenery. A box of porto potties is actually 4 pcs but I traded 2 with Sander. 2 is enough for a table, or as he said it, you are not having a rock concert. I'm rally liking this TT Combat stuff. Well priced, excellent resin and well cast too. Barrels are from Baueda. 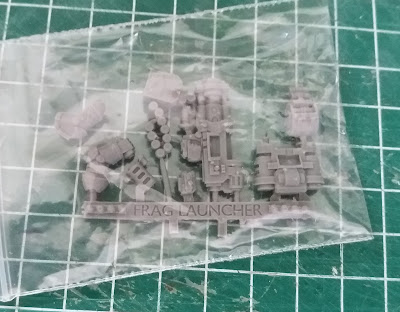 And that was it. I saw plenty of other stuff, but it's a few more months till the next show and I want to try to get most painted before that (famous last words....). Well, at least the scenery anyway.

A day well spent, not too expensive, plenty of chats with friends and people I know or follow me on my Blog or Forums, also plenty of eye candy and ideas. Yes, a day well spent. Now, off to study.