Right, after clearing a bit of the atic and a lot og my hobbyroom like a rabid ferret on Red Bull, I've got in my hobbyroom this monstrosity.... 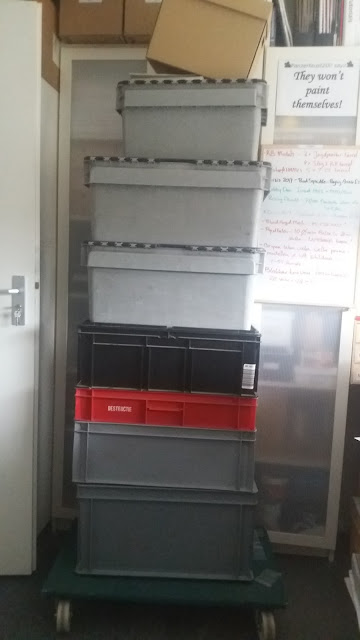 ...and all of this needs to be sorted, bagged, tagged and put online for sale. Of course, that will happen after Easter, cause right now is family time. And after a day spent with Kim and the kids and a guest and delivering a killer cola marinated chicken I spent some time in the hobby room with todays arrivals. Cause yes, I have bought stuff. And all of the stuff that had arrived today is now cleaned, built and based. 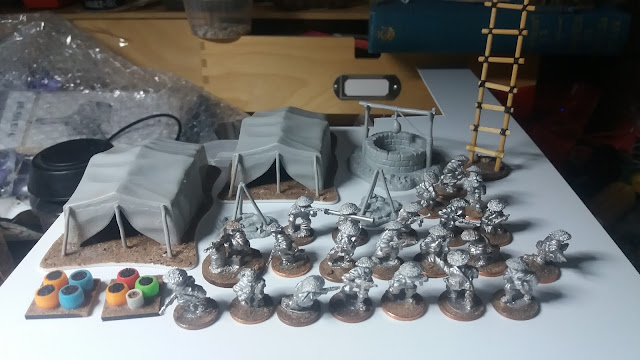 I received some Viet Minh, to be used as low class VC. Just sanded the bases smooth and stuck them to 1 euro cents with the exception of the LMG, that I put on a miscut 2mm MDF base. When everything has dried I can get to work on the mould lines and find a solution for their heads as every single one of them, with one notable exception, comes with a straw hat. And the bareheaded guy has it on his back...... So I need to find somesuitable heads and use Oyumaru on those to get some proper heads, and I can remove the straw hats or slide them onto their backs, but booney hats would be nice too. I think I have some of those in my Liberation Models box. All Britannia figures these, rather nice, and they should look fine with some work.

The tents, firepits and well are from this set: 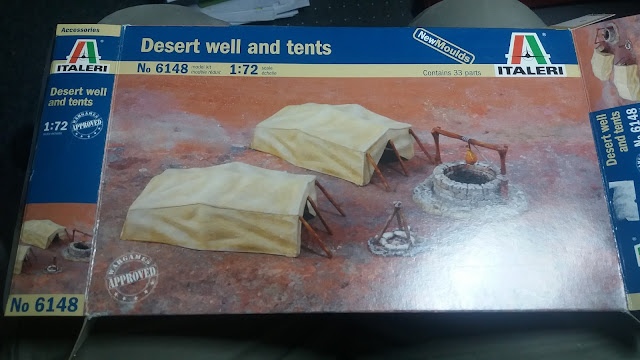 The set is from 2010 but easily found on Ebay, not so much in local stores. Not that I need more then 1 set now. Built in all in less then 30 minutes, then some cleaning after the glue had set, cut bases, added and and aned the tents sides smoorth. When ready it will go right in the 20mm Desert Village/City box, until needed. Really nice items, should set you back around 10 Pounds for a box.

Also found a ladder that I had made back then when Mordheim was released. It was bases straight up ona  piece of 3mm plastic foamboard I've long since given to Modhail. Removed that base and made a new minimalistic one for Morheim. I also found some really thin wood that I will use in the same manner for fences etc as it is perfectly 20mm scaled.

One of my pick ups for today from the charity shops, besides 2 more bags of very thin lenghts of wood, are a bag of beads for 5 cents, a cookbook holder which is perfect for mty book collection and a large sheet of woven grassy fabrik, and the pattern will not look out of place on a building from a county in the Pacific. The beads make very fine for sale items at the various shops that I want to build.


That is all for now folks, might be back tomorrownight with more news! Enjoy your Easter!
Gepost door Gunbird op 03:21