Despite a general feeling of confusion and insecurity due to either no news or too much of organisations (yes, pretty vague, ey?) I'm just goping ahead every night with a bit of cleaning, a bit of listing, and a bit of hobbytime. I'm slowly going through the boxes I have in the room, taking pics and listing them in the right locations. I am noticing that people are really tardy with paying. Quick to reply when something is listed, but easily taking up to a week or more or eseveral emails before they actually pay. I need to add a bit about payment due in 48 hours or the discount offer and reservation is cancelled, I've been having way too many non comms lately from people and it is pissing me off a bit.

Anyway, Erik (Modhail) was over yesterday evening for a chat, a cup of tea and some scenery talk. He got me some balsa and simple wire Cherry trees, and I got him a nice drill tool and his Samurai school box. While chatting, I built one of the trees on a base to see if we could improve it a bit. Some dabs with the hot glue gun, some soldering wire, and a splash of wallfiller and this was the result: 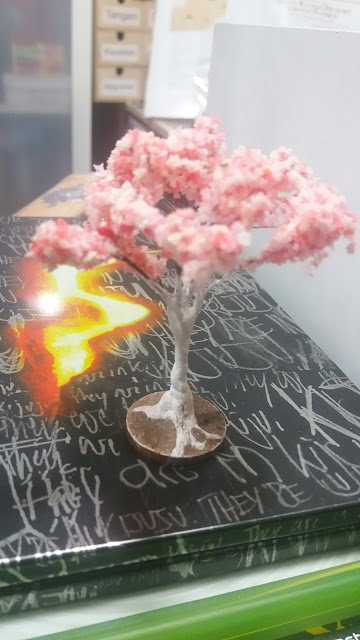 I just realised this is a shitty pic. But you can clearly NOT see the shitty twisty wire this tree is made of. The roots are soldering wire, trimmed to size and coated with woodfiller, just like the tree trunk. After Erik left I did the rest as well. 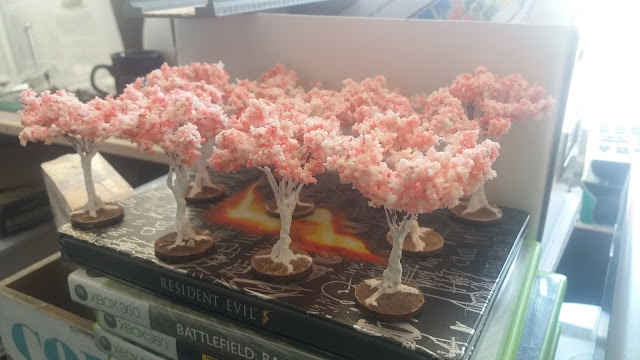 Now I need to paint and drybrush the bases and the trees, and fixate the clump foliage by soaking it with watered down Modge Podge.

I also built a bridge. 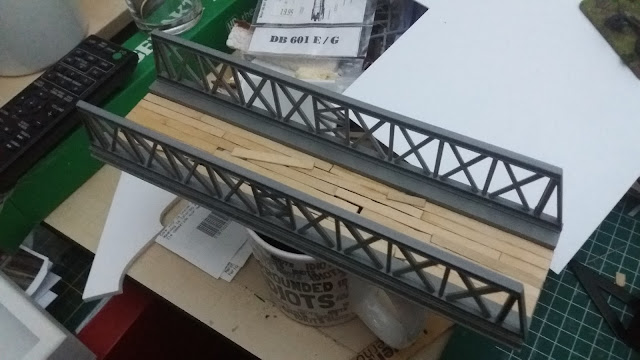 A 20mm/28mm generic affair, steel girders and wooden, beat up, planking so it really fits on every table. I'm building my bridges first, and will work on the river(s) when a  few of them are done so I can make a seperate base per bridge....I really hate it when people just lay a bridge flat on a river, I'd like to see some depth. But more on that later. I have more bridges to salvage from the junk box.....I'd really like to get my hand on 2 identical ones so I can make a longer one, but alas, sofar no luck. Maybe at the swap meets that will be all over the place next week on Kings Day.

And that's another night gone, chasing payments and filling out paperwork. Well, at least it ends with a smile. Kim lent my bottle of Alcohol (for the airbrush) and gave it back a few hours ago, and 30 minutes ago I wondered why my entire room smelled so badly of alcohol. She hadn't put the cap on properly so a bit leaked out and evaporated. Jay......