I actually already have 1 grain elevator (still in eternal PIP mode) but that is a wooden 1900's model. I've been looking for something more modern to be used in post WW1 up to modern times, not perse as a center piece of the table but to enhance the industrial feel. Well, what better way then a colossal concrete moloch. 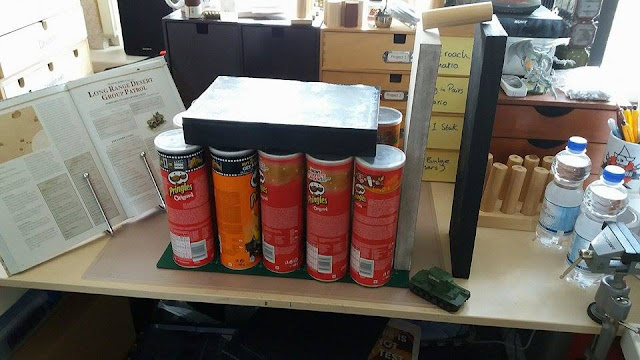 And no, I did not eat that many Pringles. They are way too expensive for something that is basically fried batter, and I rarely eat crisps anyway. No, my lovely village of Boxtel has 2 trading groups on FB, one for free stuff and another for stuff to sell, and both we use a lot to get ri dof unwanted stuff from the attic. Well, I posted an add on both for empty Pringles cans, and a couple of trips later I have way more then I need for now. Though apparently large Pringles cans come in different sizes and then there are the knock offs which are even smaller. Anyway.....

With the Stalingrad Gain Elevator in mind....this won't be that. I would need to doublestack the cans for that to get it even close to the height wanted, and make it considerably longer, and being limited in storage and to a 6x4 table, a close to scale one would be a tad useless. I have 60x40 storage boxes and this must fit in one or two of them. This setup is 25cm by 40cm for the storage part alone. Considering the available space I will add another row of Pringles cans to make a total of 6 in a row. 5 of the cans in the middle will be removed and replaced with a foamboard box, as the Granary will be 2 (or more) part for ease of storage and to increase it's usability on the table. A couple of magnets should make sure they just slot into place.

It will be a undamaged one and have no lift off roofs. Considering the types of games I (want to) play, I have no need for that and this eases construction a lot. When it is done I do feel like making a new front end, but with war damage and open bits to put troops in.....but to be honest, I doubt it would see more then a sniper, HMG or spotter team using it.

It will be a multiple use building. Window size will be between 20mm and 28mm and moslty at the higher levels so less noticable. It will be suitable from post WW1 to modern days. It should do fine for Historical as well as Sci-Fi (thinking Necromunda here and walkways from other buildings leading there).

I'm not sure when I will start it. I have 2 possible comissions (more about those later) as I really need the funds, and I want to get those out of the way first. I've also started selling my Games Workshop scenery to push myself to making my own as the GW stuff is really underscale (and sells for a lot of money, very welcome!)

And in other news, I found this beauty today: 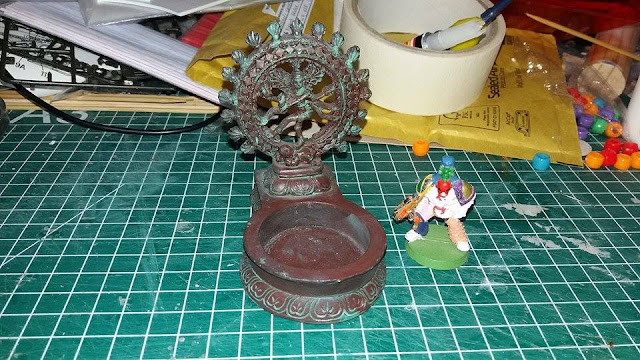 (yes, I need to clean my desk - working on it) 35 cents at the goodwill. Repaint, fill the pool with murky water or blood? Great for Pulp in both scales, dungeoneering or the future Archipellago version of Frostgrave. 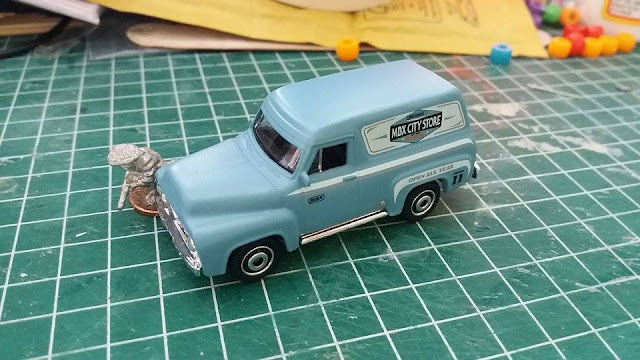 Not the best picture, as the VC is kneeling, but when standing up it fits rather well. 1955 Panel van from Matchbox. I found 2 of these, so a weatherin/new paintjob and it should be suitable for a lot of locations.

And now back to listing stuff, cleaning and sorting.