Since I want to make some proper Japanese defences to fight off the inevitable US invasion on the wargames table, I've been googling ( as I have no books on this subject matter) the various Japanese held islands. I'm doing this in no particular order, and I'm starting off with Wake Island as it is pretty limited defence wise.

Wake Island as it is now:


Wake Island (also known as Wake Atoll) is a coral atoll located in the western Pacific Ocean in the northeastern area of the Micronesia subregion, 1,501 miles (2,416 kilometres) east of Guam, 2,298 miles (3,698 kilometres) west of Honolulu and 1,991 miles (3,204 kilometres) southeast of Tokyo. The island is an unorganized, unincorporated territory of the United States that is also claimed by the Marshall Islands. Wake Island is one of the most isolated islands in the world and the nearest inhabited island is Utirik Atoll in the Marshall Islands, 592 miles (953 kilometres) to the southeast.


On December 11, 1941, Wake Island was the site of Japan's first unsuccessful attack on American forces during World War II when Marines, Naval personnel, and civilians on the island repelled an attempted Japanese invasion, sinking two destroyers and a transport. The island fell to Japanese forces, however, 12 days later in a second attack, this one with extensive support from Japanese carrier-based aircraft returning from the attack on Pearl Harbor. Wake Island remained occupied by Japanese forces until the end of the war.

Fun fact: From then on the Japanese called it Otori-Shima (大鳥島) or "Big Bird Island" for its birdlike shape.

Not so fun fact: The Japanese captured the remaining defenders, civillian and military, and deported most of them to POW camps, retaining a small amount of civillian labour.  And later in 1943 executed the remaining 98.

So, never recaptured during the war (just repeatedly bombed), what good is a review of their defences? Well, I got to start somewhere...

Google Wake Island and you'll see quite a few pictures of this: 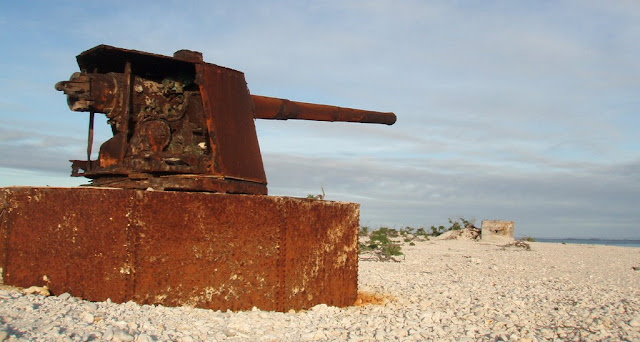 Japanese (well, technically British) 8 inch gun on Peale Island. These were obsolete guns dismounted from ships Japan had bought from the UK before WW1. This you will see on many of the Japanese held islands. It's in a really bad condition, most of the rear superstructure has rusted off, and it is mounted on a either a concrete mount clad with steel plates or a full steel box mount.


The American captives were ordered to build a series of bunkers and fortifications on Wake. The Japanese brought in an 8-inch (200 mm) naval gun which is often incorrectly[14] reported as having been captured in Singapore.

Just one gun.(though I have other sources telling me the Japanese brought in 4 of these guns, like this source: www.navweaps.com ) 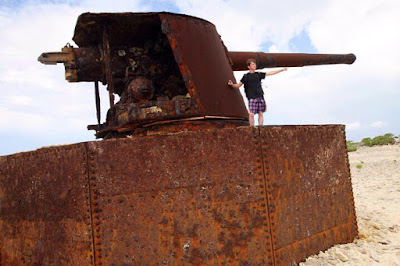 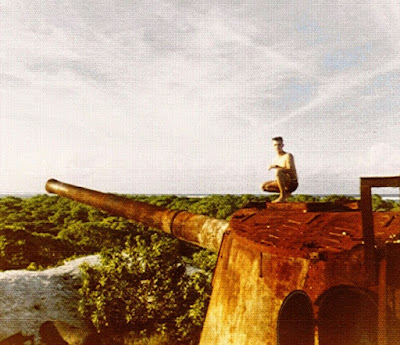 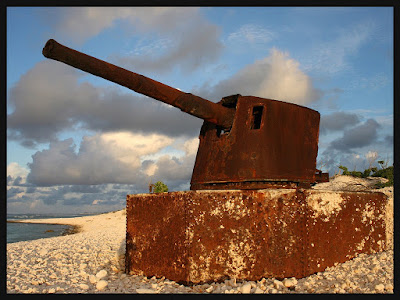 Studying Japanese coastal artillery, and in particular the common 8-inch gun, I found this page very helpful: 8-inch Coastal Defense Guns by Dirk H.R. Spennemann  even if it focusses on Micronesia, it shows all of the types of 8 inch used and the styles of cover they used and their mounting positions, mostly in pairs.

Using the indegionous Japanese made variant of the British Elswick gun, the 20.3 cm/45 Type 41 naval gun. This is it:

For Wargames purposes, I think I should build 2 guns of the fully enclosed type as this cuts down on the amount of details needed, magnetised base, with a few different baseplates depending on the location of a future game (if that ever happens). The look I will go for is the Sapuk #1 or #2. 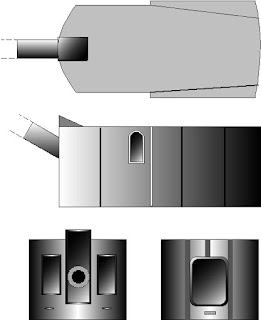 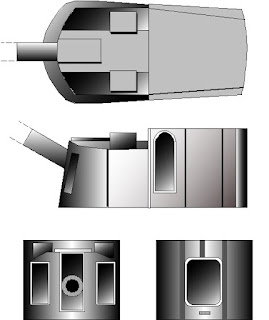 They are not terribly elaborate shapes, easy to make in plasticcard. Openings will be plated over with a spacer and painted black. For the barrels I will need to either find a suitable gun shapewise and modify it or find someone with a small lathe and woodworking skills. The closed shape and generic paintjob will make it suitable for what-if conflicts as well. EDIT: another very cost effective methos is using a 1/35 scale 10.5cm LefH18 tuned barrel. They only cost 3 euros a piece and are a tad short, but part of the barrel is inside the turret anyway so that is sorted. I can add the fluted end with some Milliput and some minor DIY lathe work.

And that's enough for today. The first VC have been cleaned, based and a few barrels upgraded to metal pins for safekeeping (mostly the M3 Grease Guns) and put in their holding box. Next up is the bag of Taliban.