(Wargaming) life is about making choices

It's been a busy week sofar. Monday I had my exam for Windows Office; Advanced that I passed with a 9.2/10, and I'm now looking over the next course and how this is planned. It's 8 lessons, cut in half by a 6 week summer holiday, so it would be 14 weeks till my planned exam, over 3 months! After chatting with the teacher we agreed to plan a exam on the last day before the summer holiday and see how it goes. As the course is about sales, adevertising and customer service, in which I have 10+ years of experience and a diploma from 2004, it means I will be spending quite a bit of time in the local library to study for the next 3 weeks to get it all into my system. So fingers crossed. The course after that is another 6 weeks, and I also have to pass my blind typing exam, but in theory, if all goes well, I could (in theory) finish my course 2 months ahead of schedule, so I can start the German Language course sooner as planned. Though tbh I still have not decided which one, the starter or the advanced course. I can read German, I can understand most German (be it on tv or live), my spoken German is way better then the average Dutch, but my writing skills are a bit lacking. In the meanwhile, I got a Spanish language DVD to play with once a week, just for funsies.

Right, back to the hobby. 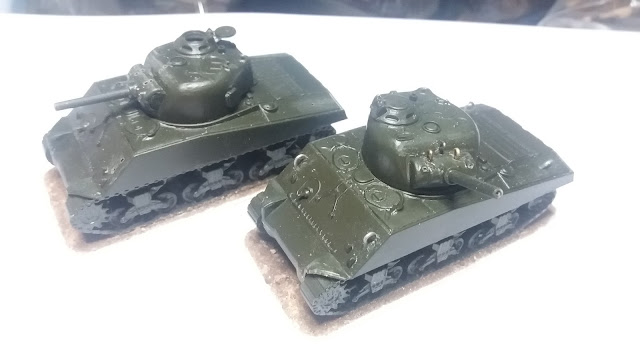 2x M4A3 105mm guntanks for my future Iranians.....back to the past for me, if anyone remembers the ones I painted back in 2009, which got sold off when I sold my Iraqi army? 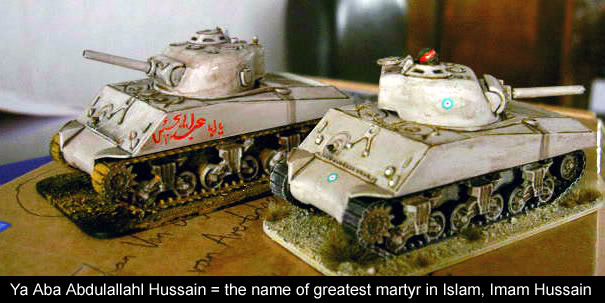 They are almost finished, just adding lifting rings to both of them in the right places and when the time comes to paint them, behead someone for the commander and maybe drop a few empty 105 shellcasings on the rear deck.

Did squat diddly building wise today. pent a good 30 minutes in the attic (always a smart move on a hot day, lifting heavy items in already sauna like environment and grabbed almost every single kit I have no need for in the near future. 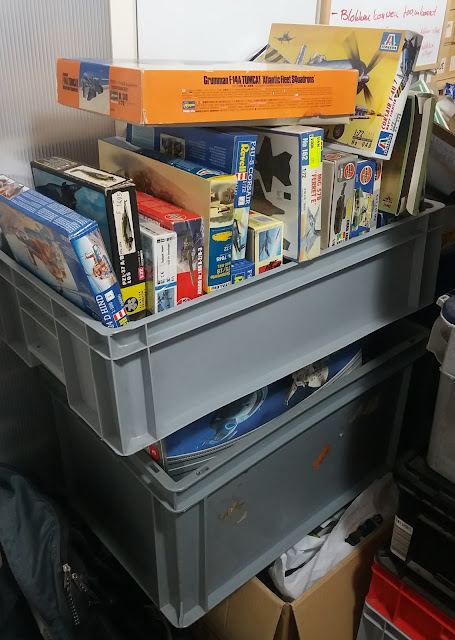 That is another 50+ kist of stuff that is either the wrong scale, I have more then a few off already or are modern(ish) day fighter jets because if there will ever be a Battlegroup Modern(ish) the only likely aircraft you will see over a active battlefield are fighter bombers. A pure air to air fighter like a Tomcat or a Russian Stealth Jet is a bit pointless for the era (though I'm keeping 2 of those stealthjets to be built as wheels down versions for Black Ops games). Combine this with about 50+ resin kits, a couple of bags of metal miniatures and some painted stuff (yes, painted stuff) I have the rest of the week to bag and tag everything in one large list so it can go online in the weekend on the various groups and forums. Kim is really happy with my efforts of building as much as possible of what I want to keep and selling off what do not intend to use any time soon.

Plenty to do for the coming days. Including repairing my WIP Kursk Windmill as a knocked the fella down from a plank and one of the sails came flying off. Nothing a pin can't fix, and more motivation to get him done so he can join his brother.
Gepost door Gunbird op 00:33