Back to the Future: Desert Town

Remember the 20mm desert town I made a few years ago? And them dumped into boxes for later.

Well, later is now. With my thumb removed from my arse, having a quiet sunday afternoon with the girls crafting and me firing up the airbrush after getting the first box of buildings (Kim was off for a high tea).

So.....1 basecoat of Vallejo RAL8000 airbrush primer later (and a bit of grey primer on some doors for practice). 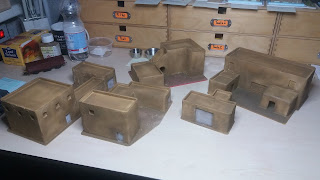 And the basics are done. And then realised some bases are not completely sanded yet <sigh>. 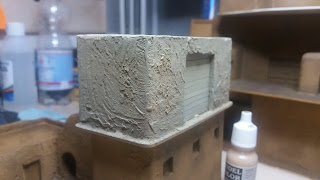 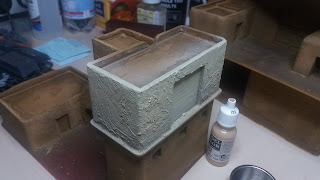 My high quality phone cam *cough* bullshit *cough* washes it out so much it looks grey, but these are washed with Brown and Black  and then airbrushed on a 45 degree angle with VMC Dark Sand. (just trying out stuff here to get the look) 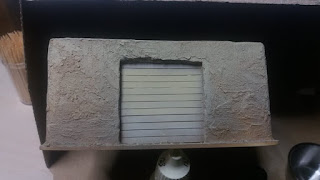 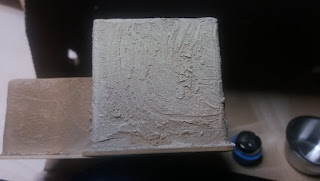 Slightly better shots of how they look now.

But......my VMC paints are now 10+ years old and in need of replacing. Many have clogged beyond use, and with my more frequent use of the air paints (not just Vallejo but many others) I think it is time to no longer to use them for my airbrush (as all of the cleaning when they clog (and clog they do!) is getting annoying. So, I picked up some AK Real Colours lately, and the AK RC079 CARC Tan (beats me what that means) come damn close to the Dark Sand I used so I am giving that a try, and will highlight it with AK RC041 Portland Stone and that will be the paintbase for all of them.


I grabbed the 3 water trougs as well as they are nice and small practice models. The missing basing sand on a few isn't an issue either, I'll paint the buildings first anyway and the real weathering is done first, and the basing finished last.


The factory/barrack toilets are ready to be primed.....but I can't for the life of me get a colour in my head that is neutral yet fitting. Pictures of the wrecked one are plentiful though, like this one: 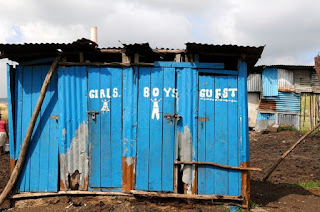 On a sad side note: Googling "Open pit latrines" breaks your heart. Drownings, and the amount of people in the world who don't even have this most basic of toilet plus the pics of kids.
Gepost door Gunbird op 01:50