Northag: Buying the farm - the actual farm I bought from Leven.

Was pleasantly surprised by the order I made with Leven a while back being handed to my wife (who was a bit less, shall we say, happy about it).

A slow unpack later (everything is individually  wrapped with extra protection on all of the chimneys which is very, very good product care) all the bits are in front of me. Grand total of the order is 30 GBP. 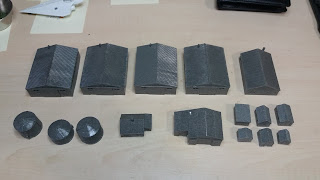 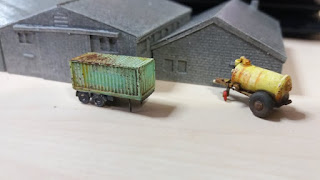 Second impression: The airfield MT Workshops, when viewed from the side, have sag in the front and back. It is a rather large piece and not a major issue, but it is there. The Modern storage tanks, the 2 large ones have the same miscast....but again, no major issue and easily solved with some spare plastic. I washed the pieces in hot soapy water as always, but they were still a bit slippery. I sprayed them with degreaser but after that that it still felt very smooth. With my current "hand-issue" I have a bit of trouble feeling is the resin is just very smooth or still has some mould release on it.

I'll start with the Airfield shops as I want to want to make 4 identical pieces that all have their own feed storage, clean up the very few resin bubbles and then give them a good scrub again, add some details and glue them to nails for painting. But more on that later.
Gepost door Gunbird op 02:16