As I'm waiting for parts I was cleaning my harddrive of no longer needed bits, and ran across a picture of the S&S toilet block for Africa (or other places). 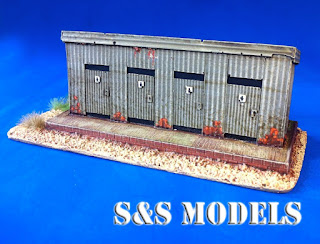 Which I like, but let's face it.... not paying 10 quid each plus shipping for a bubbly cast that needs fixing, cleaning and basing anyway. So, a few bits of scrap foam, a plasticcard base and cardboard for the panels later, I have the basics for a very shitty toilet on the left, a UN sponsored toilet on the right that I need to add a handwash basin on the side and a privacy wall in the front of the doors, and a army barracks/factory toilets in the back. So I get to paint a well made, a ok one and one that has gone completely to shit.....jay.

As it is now planned, paint the army one this week first, while doing finishing work on the other 2 when I have the time so something might be done in between.
Gepost door Gunbird op 03:29