I think we all can agree that More Gunz! and More Power! are very Orky things....thingz....whatever.

So, I've been adding more and more engin gubbinz, and started working on the basics of the prow. Atm she will be a hair shorter than your average Imperial Cruiser, so she is a good size. 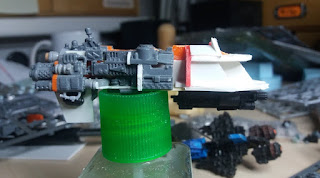 Prow scaffold. Looks shit now, but is easier to get all the gubbinz in place and gives a feel of her size. She is a big girl compared to a GW metal Kill Kroozer.... 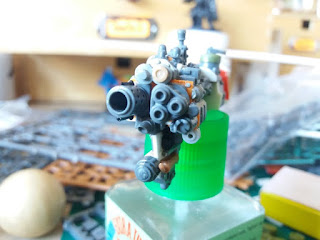 More power! Even more Power! And enough radiation leaks to kill all life on a small moon by now, but hey....More Power!

I'll flesh out the rest of the prow, work on the winglets, and find something that could function as the command bridge. After that add more gun turrets, final detailing and pop her on a base.
Gepost door Gunbird op 13:01