Space. Lots of it.

Sorry for the short break, caught a bug that knocked me down for a few weeks. Then caught Covid cause why not. Today is the last day of quarantine for me and my family, and I still have the stamina of a dead horse. Jay...

Painted more cargo ships courtesy of my buddy Erik (Modhail), made 2 more planets out of styrofoam and cobbled up a Space Station out of 3 GW bits

Tsade-74 is basically a giant plasma reactor from the Age of Technology that was found drifting in the Koronus Expanse. The meaning of the number 25 on the side is unknown, though it is assumed that more of these existed at one time or another. Taken over by the AM it now serves as a back up generator and monitoring station. Well, that is what their official stance on it is anyway....

I had a scrapped/damaged hatch ring from a Rhino, and was sorting through bits for something else when I noticed how well a repulsor exhaust from the new Primaris tank fitted on it, and the power whatever from a Knight or Armiger or some AM contraption fitted on top of it. The 25 was shaved from the srpues of an old Airfix kit as well as some bits of plasticcard and round boltheads. Several shades of washes and clean ups with water for the worn and beaten effect later, a Israeli tank decal and some details later she is done. Nifty little thing. Really happy how the top turned out with the swirling reactor effect. It has 3 shuttlebays, in case you are wondering what the black squares with 1, 2 and 3 means. 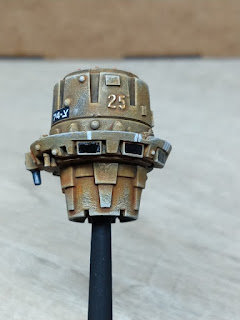 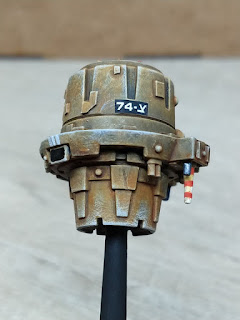 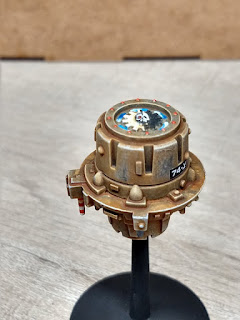 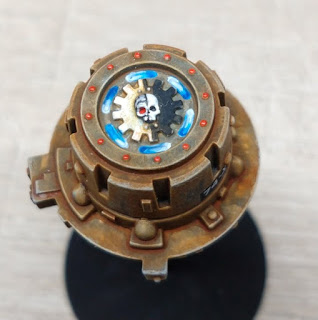 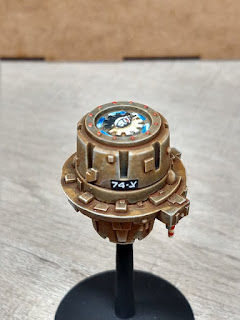 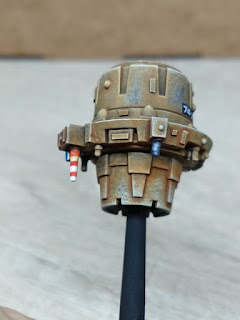 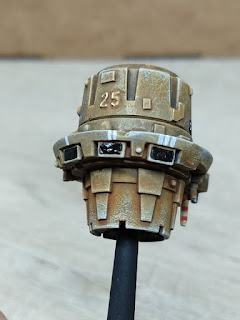 "That's no moon..." Well, 2 planets and 1 moon. Meet Coffe with Milk and the Jalapeno cakepop moon, and Swirly Smurf. (don't down on my lack of creativity in naming these)

Styrofoam balls from the Goodwill, spackle for the basing and experimental paint jobs. Used Contrast on Swirly Smurf, but went over it again with white as the grey (Apothecary White) just wasn't to my liking. The Terradon Turquoise came out great. Coffee with Milk and the Cakepop were done with normal acrylics, nicely washed and blended as much as I could stand. Basic, simple, and easy on the table. 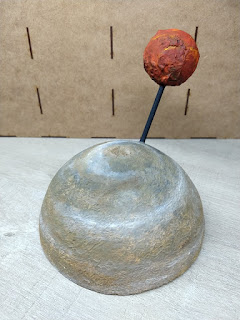 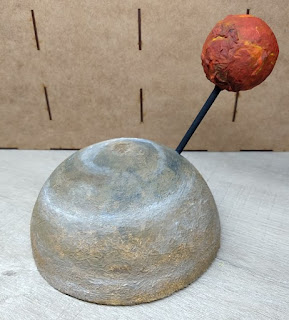 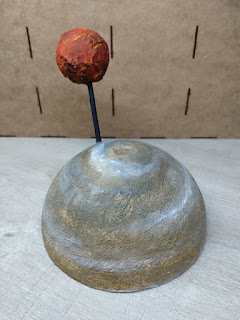 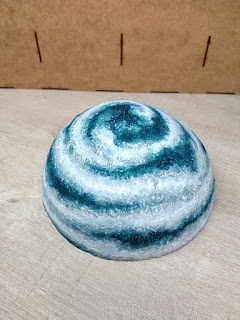 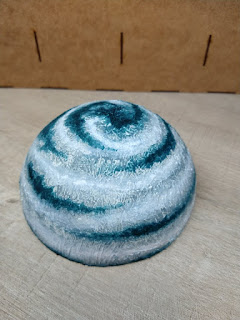 Next up are the 4 ships I painted. From top left we have, in the red and green scheme, the "Withe Roos", in the grey and yellow scheme "Lucia", the very garish yellow and blue is "BGA" or as we know him, the Rogue Trader Big Gay Al. And finally the red and dirty white scheme we have the "F-Bomb" 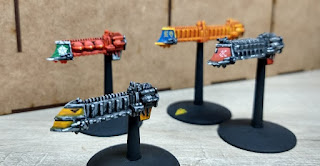 Starting off with "Withe Roos". Family run for generations, carrying liquified rare and noble gasses to Manufactoriums that need them. Their familily sigil marks the bow of their ship. (from the very useful new Sororitas decal sheet, though in hindsight I think I should have used the slightly smaller one) 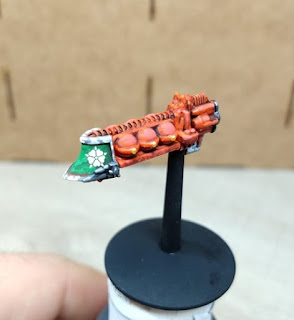 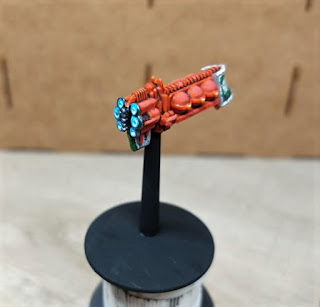 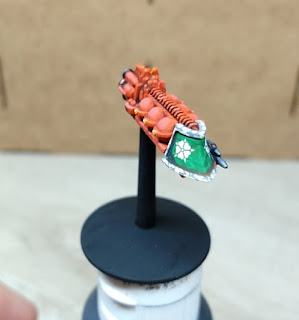 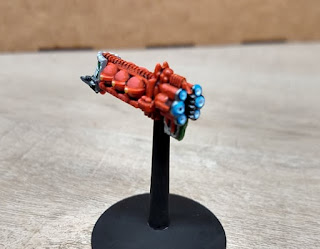 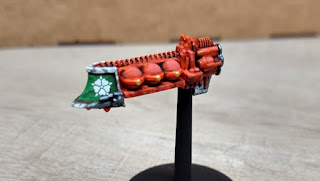 "Lucia" is a a small independant cargo ship, hauling what she can to where she can if there is a profit to be made. Not the best looks but she has it where it counts and her engines are running at peak efficiency. Lucia decal is from the new Sororitas sheet. 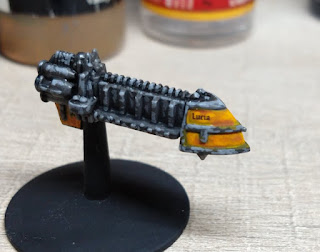 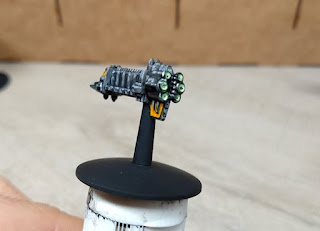 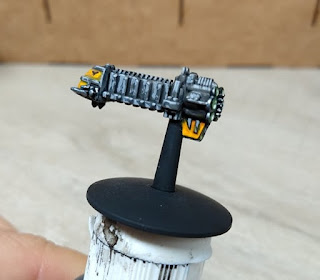 "BGA" is a bit of an oddball. Garish in color, Eldar (I refuse to use the new name btw) markings, the Rogue Trader known as Big Gay Al carries all the right papers and clearances to not be shot on sight. His alien wares are higly sought after by planetary government elites for various reasons. best not to associate with him though. "BGA" counts as a Large Transport, decals used are the ancient ones from the Eldar sheet. 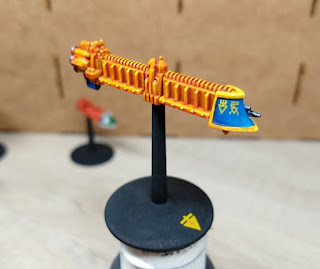 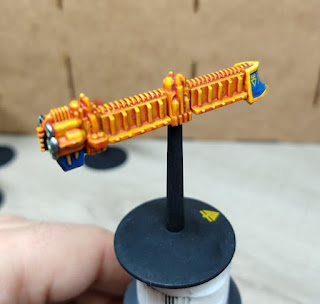 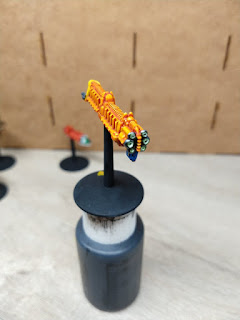 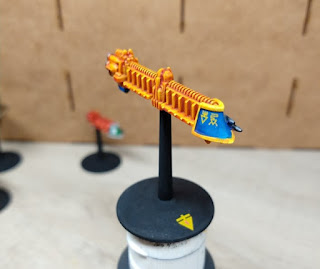 "F-Bomb" a munitions tranport, went missing during the turbulent times after the Horus Heresy and returned decades later, returning home as a Fire Ship used by Pirates to (succesfully) cripple the Mars class cruiser Saint Emmerich that was coordinating the defence against the pirates in that area. Made one hell of a bang! The markings on her bow are from my sheet of German WW2 Infantry divison decals which is damn perfect for makings at this scale. The F is from the new Sororitas sheet. 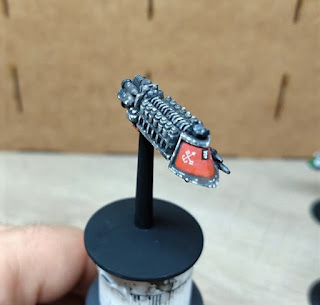 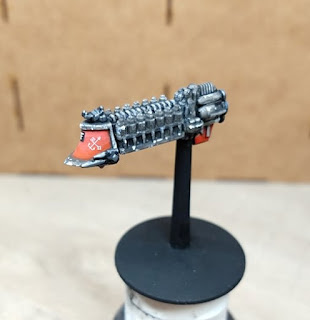 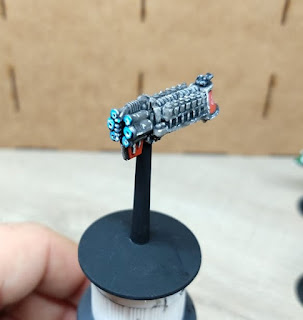 I really wish I had a cost effective way to get white decals with their names made, but alas, this will have to do.