I'm a bit of a Urban Explorer by heart. I can just stare at a moss coverd wall with a rusty, graffiti coated door and enjoy that immensely. It all harks back to the day they were tearing down half of my primary school (not enough kids left in the village), I was 10 back then and the demolition site wasn't fenced off. Or not very well anyway. The building as a whole was 2 identical 2 story buildings and they would only demolish the left wing. Walking in the one wing, with glass shattered everywhere, destroyed furniture and ripped pipes, something sparked and my interest for desctruction and decay had been born.

Just for old times sake, the Tijl Uilenspiegel school back in my days (when I was there it was still called School of the Holy Spirit - but the building I took my classes in was already called Tijl Uilenspiegel). In case you are wondering, he is a character from Dutch-German folklore around the 1500's, and is dressed as a fool in full costume, or a Nar as we call it.

Try as I might, I could not find pics of the demolition. Thus ends the little detour to the day that shaped me 30 years ago.

In comes Urban Exploring. I never had the nerve to enter deserted old buildings (law abiding an all that, stickler for rules) but I always enjoyed photographing them. Sadly, that collection was lost in a flooding and since I no longer actively go out looking for pics I just  snap a few whenever the opportunity arises. Or look at other peoples work. And that is how I learned of Hashima Island, also knows as Battleship Island. Home of a underwater coalmine and a prime example of early concrete highrises. Abandoned and deserted since the 70's. Pictures of it are really nice for copying for scenery. So I was quite chuffed the other day when I find they had a Google Streetview of the place since a few years! 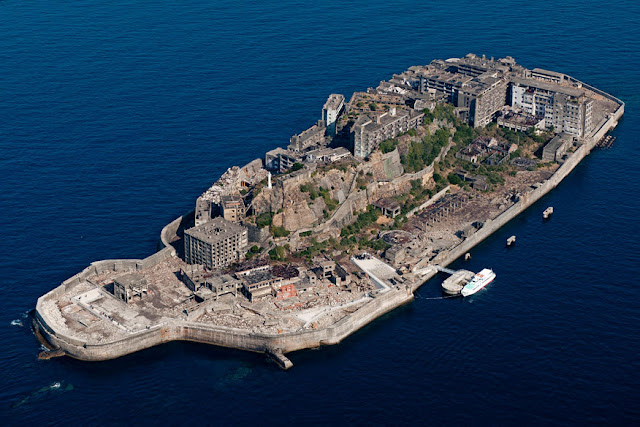 I will spend a bit of time walking around the place and getting some new ideas for the ruined city :)
Gepost door Gunbird op 23:59