A week before Figz I got a cold. On Friday and Saturday I was in bed with a fever. I came this close to cancelling my "Working with foamboard" workshop and going to Figz at all. But I went anyway (after taking a ton of painkillers - I'll be reporting to the doctors office first thing on monday).

As it is, I spent most of my time at the table for the demonstration feeling rather unwell, but making the best of it. In the end, a little over half a dozen people actually spent time with me, asking questions about how to approach this and that kind of scenery, but no one took my offer to have a go at foamboard modelling themselves, sadly, so I had brought quite a few extra bits for nothing. Such is life. I did spend some time however trying out a new cutting method from my regular one, by leaving 5mm openings in the foamboard before glueing the wallsections together so you would have a seamless cut, but I either cut too deep or made the gap too narrow so it ripped when folded over. Since I find just wallpapering a bit of paper over the seam to be just as quick if not quicker I don't see any ups to the method and I will not be trying it again.

What did I make? Well, I had a go at my idea of a (very basic) Necromundan Waste Air Processing unit....though if it spews noxious fumes or actually sends out fresh recycled air is a good questions. Just one A4 sheet of foamboard, a vent from the DIY I had lying around for ages, and some cardboard. 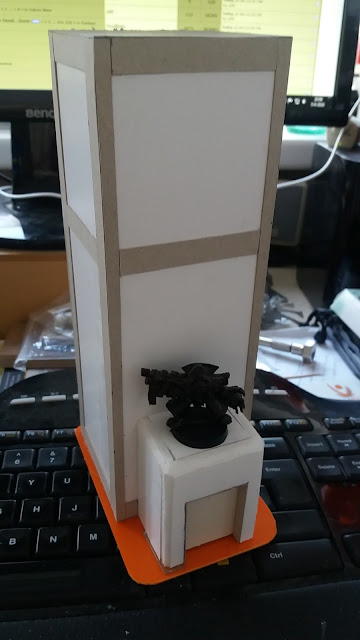 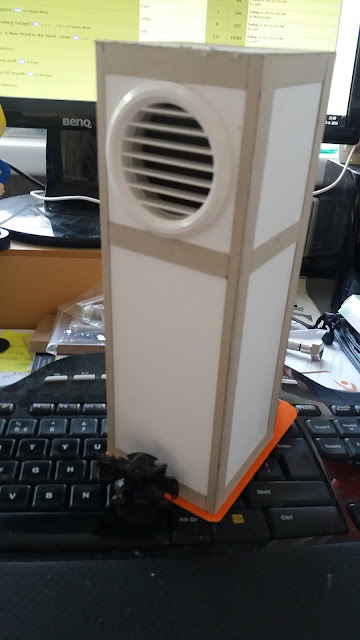 Nothing fancy, just a concrete colum (well, preformed slabs really with a bolted steel shell) and a good LOS blocker in the Underhive. Also a logical exit point for a gang that has Vents added to their territory. I will add bolts to the cardboard, cut out a proper cardboard door and glue that in place, and coat the doorway bunker so it looks more like poured concrete. I'll leave it pretty featureless otherwise. Top will stay bare and flat so I can lay plankways from there to other levels and back again. Still plenty of work to do.

I took 2 short breaks to have a stoll around. The area was split down the middle (entree), to the right were the displays by various painters (and me), to the left were the traders and display games. Modern War, Post Apocalyptisch, WW2, there was something for everyone to look at. All the way in the back was a workshop for making your own trees, very nice. Sadly, no pics from me.

In my first round I traded with people who wanted stuff from me (some books and all of my 28mm Germans), in the second round I visited the 2nd hand kit trader stand who is always good for some nice buys. I picked up the following:


Normally I would not buy so many kits in one go, but he had a big pile of them marked "5 euro each"  The Roden or the Hasegawa kit alone go for almost 20 euros in the local hobby shops here, the 1:1250 ships seemed more practical then the 1:600 English cruisers and Destroyers he had laying around and a wreck-base for a fiver is a good wreck if you ask me. I also picked up these:
Sadly, I was not able to put more work in La Maisontaal during the day. It was nice to see so many familiar faces again and the output was pretty good for this small but free show on what was a very hot an sunny day (by Dutch standards, 28 degrees Celcius).

Edit: I tried to go to sleep. But a friend wanted my take on Tau, as he wants to restart/do over his Tau, so he asked me to draw my Tau as how I want to/will paint them. Pretty simple (even if it took me 15 minutes). 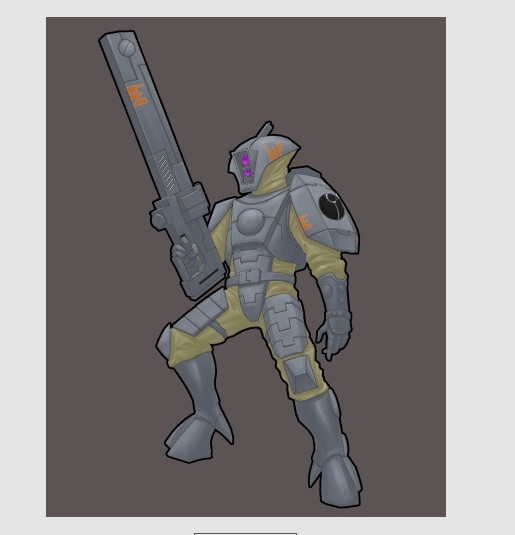 Why yes, that is the Eastern Empire version of the Tau focussed on City Fight. Don't change a winning idea. As I never plan to go beyond a small Kill Team all of the heavy equipment is not of my concern and lots of little conversions are. Must get back to these chaps soon.