This year, you had the choice to try out 29 different games. 29! From sci-fi to ancients, large armies or skirmishes, home made rules and commercial ones.

I went for a game of Gaslands, Rapid Fire and a workshop in making trees for the wargames table. I did not use the 4th slot as I would just overextend myself energy wise (and my wife wanted me to pick up the kids asap which is a long drive from Poldercon to my parents and home again). 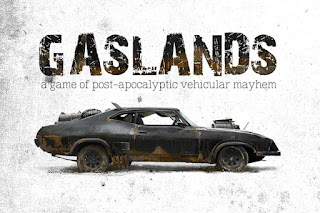 Earth is a burned out shell since the cold war went hot… 4 drivers race for the chance to earn a ticket to Mars and have a future again. The rules of the race are simple. Get across the finish line 1st. Cars,fuel, guns and ammo are provided for by your sponsor. You will finish first or die trying..
This demo gives you a chance to select a car from 1 of 6 sponsored teams. Each with their own strengths and quirks to race against 3 other drivers. Finish 1st! 2nd place don’t count …but even when you are out of the race you you ‘ll get to play the audience and deploy traps ..
A game by Mike Hutchinson. Full rules allow custom build combat vehicles. Everything from a bike to a massive battle rig ,a tank or even a helicopter. Fancy a bus full of firebomb throwing anarchists? You can build it, want to ride the last of the interceptors? Go ahead. Campaign rules allow you to build and develop gangs of all types of roadwarriors Participate February 12 and claim bragging rights. When this game is published by Osprey in the near future you were part of the Beta test. More about this game on gaslands.com (currently unavailable at the posting of this Blogpost)
Start your engines, arm your guns … 3… 2…..1…GO!

(All logic aside....racing for a ticket to Mars? Why would anyone sponsor you to get off Earth, would they not want to get offplanet themselves? Also, it's been in Beta for 2 years now?)

I love it. This is exactly the game I have been gathering Matchbox cars for all along, but never found the game I wanted. I have now. 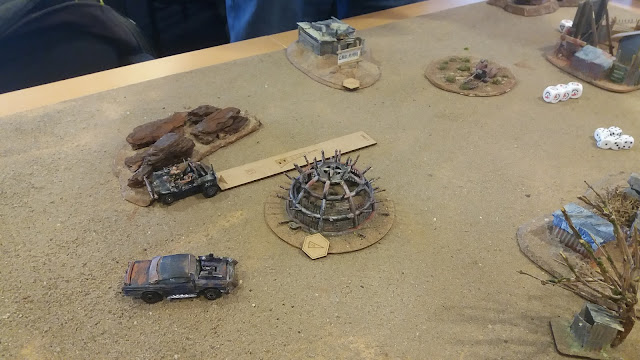 Simple board, some rocks, some scrappiles, some shacks and a.....baby Thunderdome?  Stat wise, we used identical cars for the demo. We just followed a loose track in a 8 shape, first to finish wins, no shooting until we pass the first marker. Everyone starts in 1st gear. Depending on the type of vehicle you can 2-6 dice (but you don't have to). Choose a template that fits with your speed, check the bonus/penalty and perhaps roll the dice to see if you can change them in your favour. No premeasuring! As you can see in this picture, my opponent misjudged the length of his template anc clipped the rock for 1 damage and some stress tokens (they are not called stress tokens but I forgot their name). After this he spun out of control and I just shifted up and sped away across the finish line. 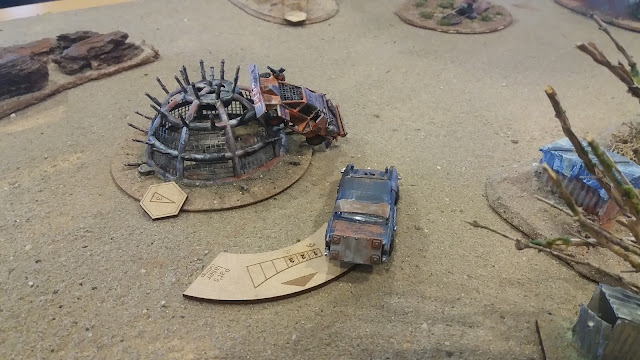 For the next game I chose to be much more agressive, After I spun out of control your opponent on your left chooses the facing of your car. He put me in such a way that I barely made the turn but went full throttle anyway, while he had a bad luck of the dice and slammed into a hut, bouncing back onto the course, spun out of control and I set him up facing the Thunderdome in 1st gear. As the turn for 1st gear had already passed and I was in my 3rd I got 2 moves then made me make the turn quite nicely and slam into his side. Then rolling some dice I managed to shift 2 more gears up to ram him even harder and the hit flung his carcass on the Thunderdome. (I removed all of his hitpoints) But I then drove through a pool of fire and explosive bits from his wreck and losing my remaining hitpoints in the process as well. Such is life in the post apocalypse!


Everything is fully customisable. From cars to bikes to helicopters, tanks and warrigs, anything goes. Tons of weapons too (though I don't think we fired a shot all game, we were too busy setting up rams) While the template and dice and card system from X-wing doesn't do it for me, the dice and template system from Gaslands (plus the setting) do do it for me. As it used Matchbox cars, this should be a great game for kids too.

Our host gave each of us a set of stickers so we could convert 6 dice into the dice needed for the game, but sadly I somehow managed to lsoe that sheet though I was pretty sure I put it in my box, but I've just emptied it and there was no sticker sheet in it :( Crap, better send him a PM.

Next up I did the Build your own tree - workshop.

Wow. Some beautiful examples there. 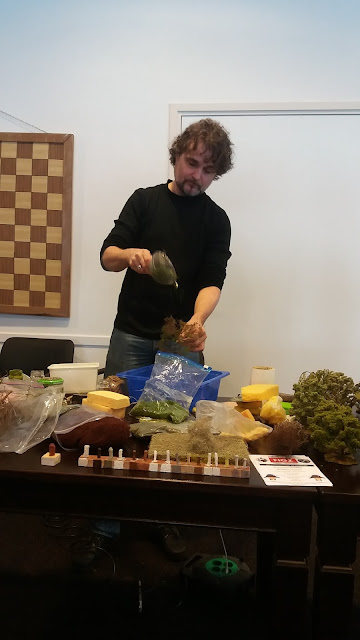 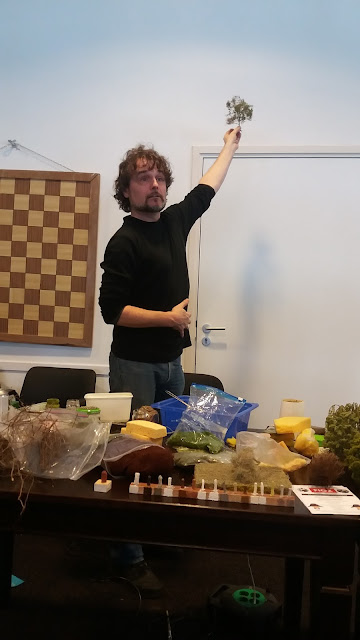 Quick, to the point, with plenty of examples and show of skill. What to do and what not to do. Really clever stuff. 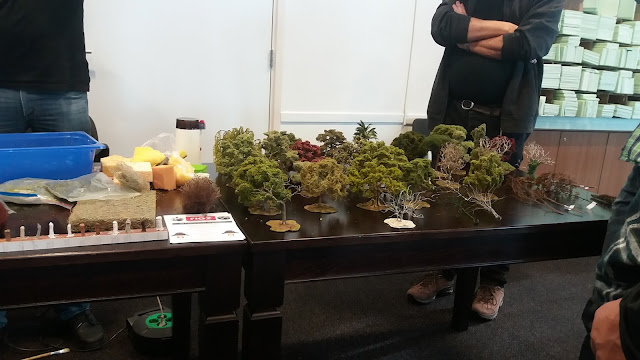 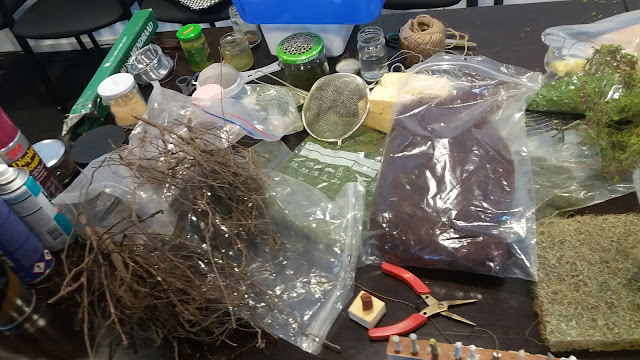 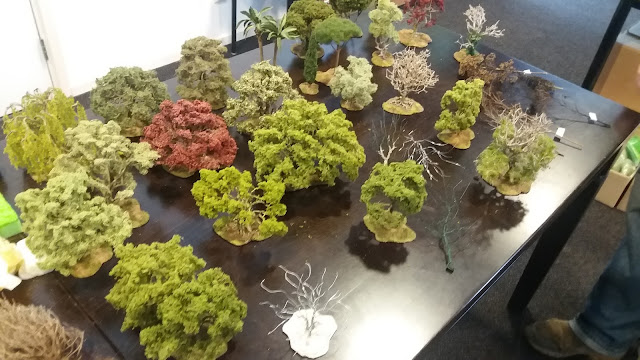 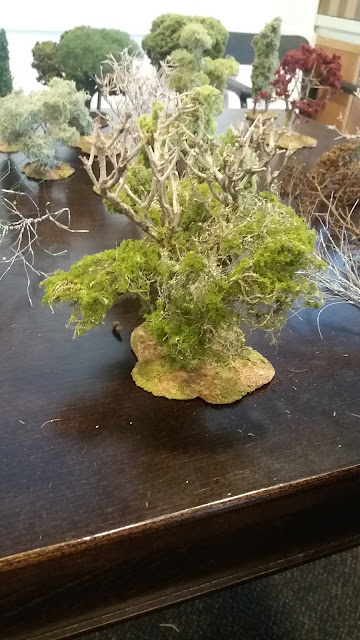 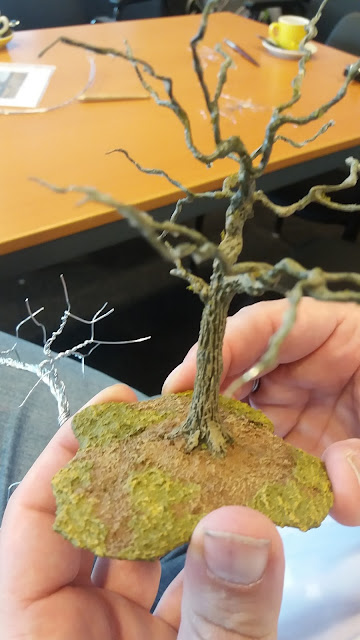 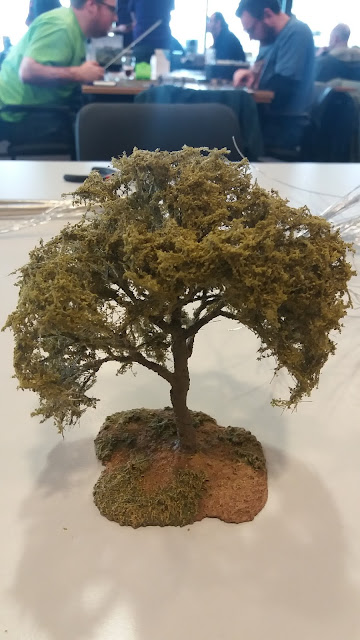 Real wood, wire trees, dead shrubs for a base. Rubbereised horsehair, home made coarse flock, everything passed the revue. I even made my won tree base. 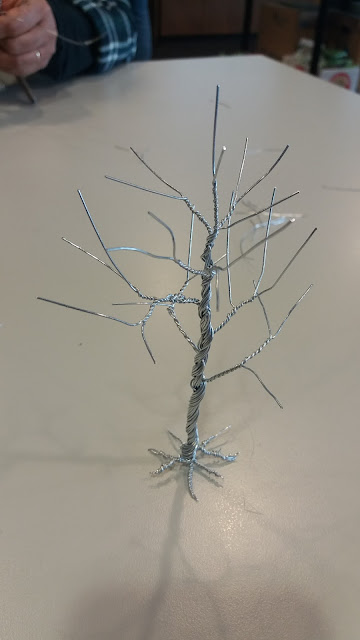 Now to use woodglue and greenstuff to give it shape. Dead simple really, it just takes some effort. I've set my mind on making 20 dead/winter trees first to see if I can manage it. If you want to have a go, look at one of his tutorials >> Bennosfiguresforum Tutorial

Then it was lunchtime, excellent catering (the salad did suck a bit though) and then some rummaging in the 2 shops. I'd told myself to only go through the bargain bin and get models with as much use as possible, if any. Well.....

FGV502 Armour Rack & Lectern (8 euros) and FGV503 Lich Lord Treasure Tokens (5 euros) will work fine for any type of Dungeon or Cultist game (past, modern or future). FGX002 Bear (8 euros) and FGV311 White Gorilla (8 euros) are just additional monsters for the collection that work for many, many periods. All on sale at 5 euros per blister. I skipped the infantry and wizards etc for the above reason > multi usability.

My third slot was a 1940 Zeeland French vs Germans using Rapid Fire.....which I had not played in over 6-7 years now? 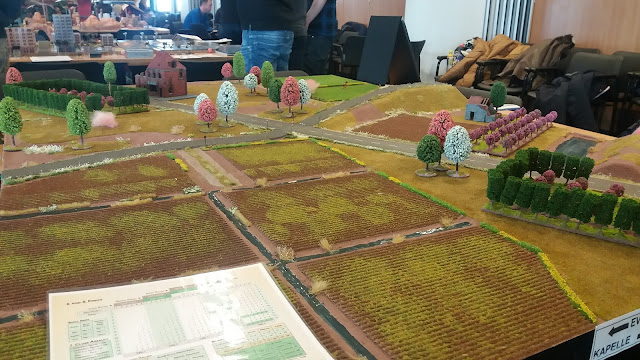 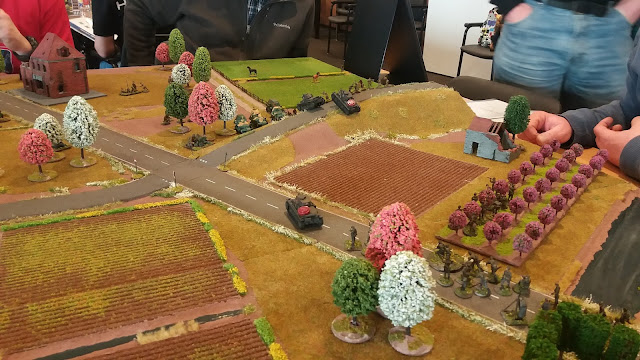 Lovely table. Marc will be taking this game to conventions for the rest of the year. Rapid Fire plays very differently from Battlegroup, you get to use all of your units and weapons ranges are short....I just did not like it. I did ram my panzers up the French throat who were all cowering behind the dyke and we got halfway. I think it was a draw by the time I had taken out 2 French tanks and he had no infantry capable of hurting me, but he did have 2 25mm AT guns deployed which I had planned to run over but apparently in Rapid Fire you can snap fire in your opponents turn and his shot damaged/detroyed my tank. I'm used to Battlegroup were you have to spend a order to put a unit on reserve fire else no such luck, so I was  bit miffed when that happend cause it was a new rule to me anyway. I should challenge Marc to play a game of Battlegroup with the same forces someday.

And that was the end of my day at Poldercon. I talked to a few friends, missed a few, saw some lovely tables and had a good time. 3 hours of driving later to pick up my kids I was home again, and wasted. Here are some more photo's of a table I really liked, to enjoy :) 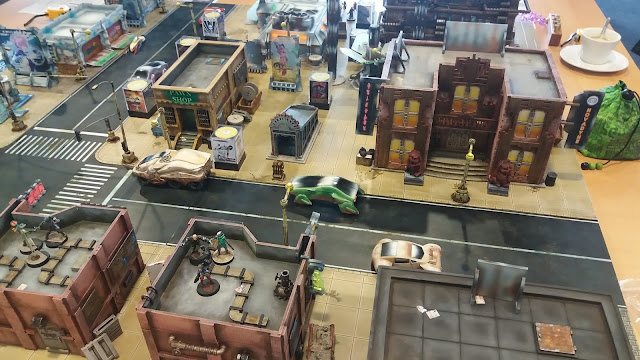 Malebogia's beautiful table. So much detail and thought was put into it. 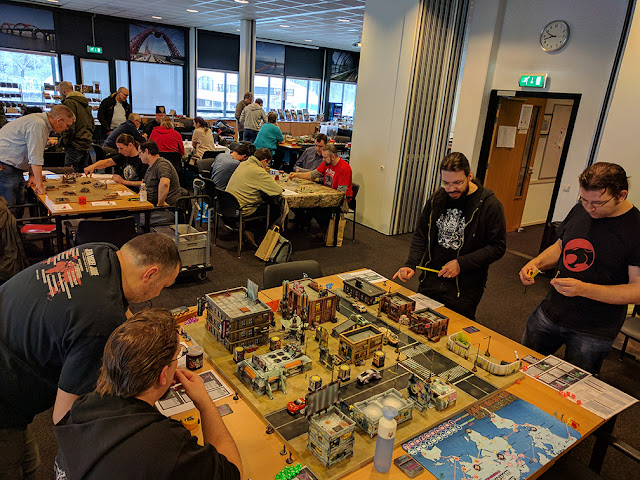 Another shot of his table. I'm playing Gaslands on the top left table.

7th picture down is my slim figure as seen from the back :D Patrick, my fellow Dutch Wargames Trading FB page mod is standing next to me (Yes, I've become a mod on 2 FB groups now....the Dutch Wargames Trading site and I'm helping Piers out with the Battlegroup FB page)  and we are watching Peter Schuleins table. The house comes apart in multiple levels, and with a cellar etc....it's a work of art.
Gepost door Gunbird op 21:20