I decided I wasn't busy enough yet and did something I should have done aaaages ago. I set up a Dutch Battlegroup FB page. Now I can finally start to take in how many are interested, what scale or scales they use, what kind of questions they have and perhaps find a way to do a meetup for people who are interested in learning about the game and giving it a try. Well, that is the plan anyway.

Then real life intervened as due to a miscommunication Kim actually wanted me to clear out the girls room and replace everything with new furniture in 2 days time (GREAT) and on the 2nd day, in the eraly hours we got a phonecall from my dad telling us both girls are sick, please pick them up asap as they kept us up all night. Best laid plans and all that....I rushed through the building process, cursing along the way, but we got it finished and Kim picked up the kids as my knees are now really shot. As sick as they were though, they loved seeing ther new layout, beds etc, and fell asleep in record time. 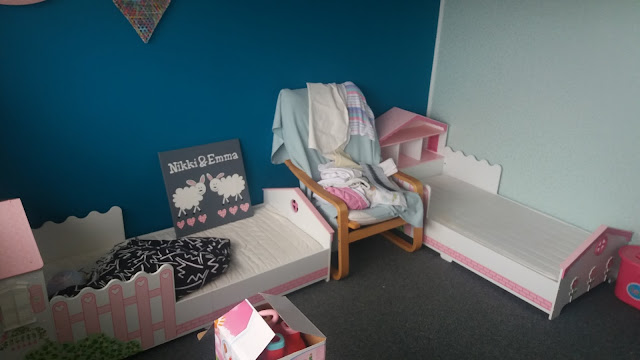 The room when I was finished....Kim then came in for cleaning, matress covers, sheets etc. Supergirly, superpink, and the first thing they did when they saw the bed is stuff their stuffed animals in the little house at the end. So cute :)

Dead tired, but a lot less stressed out now. The payment for school has been sorted, I'm slowly getting the hang of typing blind, and I've sold over a dozen kits in the past week so just made a preorder for 1 box of S-Models Crusader I/II's, 1 box of S-Models Matilda CS and 1 box of Roden Armoured Car 1920 for pick up at the TWENOT meeting at Overloon in March. I had preferred to pick up 2 boxes of Crusaders but alas, he only had one left. This will be the start of my British force for Afrika. I had planned thne Light Mark VI's to have been the start, but the JB Model comes without sand channels so I've put those in the BEF box for later. The PSC Mark 9 is now also put in the Afrika box and one box gives me a full unit. Now to raid the bits box as there should be a spare 40mm Bofors plus tow there somewhere. Troops can come later, Piers keeps dropping hints about something from PSC and I'm pretty curious about it.

And there seems to be some grand conspiracy about getting my room back in order...every time I plan to make an effort of clearing it, something else unexpected pops up and ruins it. And I'm stuck in some mental blockade that I want a lot of this mess gone and sold before I do anything useful hobby wise.

Oh well, that gives me more time to find a Caunter colour I like and can replicate a ton of times (and does not have any blue in it). Oh, and 2 kilos of 0.6mm floral wire is a lot of wire! But it will be fun, I say.