On the first week of school, my teacher gave to me....

A splitting headache, for starters! :D Nothing that unusual, ever since the accident I have them 3-5 days a week, but only in the evenings. It will pass though, I think my brain just has to get to grips being used in a very different then usual. First class on monday (20 minute drive became a 60 minute drive due to traffic jams, I'll have to remember that) was 3 hours on the Dutch language - spelling mostly. I've never been great at spelling tests (aka I really suck at them) but the chapter we got was very to the point and after a good read I was able to finish each set of 20 questions with 3 errors on average. And the errors I did make is something I can work on. Since I made my tests on  my notebook (a old school paper one btw) the test book is still clear so I can repeat the test at my leasure anc check for the correct answers. After about 6 tests the teacher signed me off on this chapter as it was pretty clear I can spell in Dutch and other then refreshing my memory, no real issues popped up. She then took some time explaining the course to me, how it works with exams, that I must attend each lesson and there can be no exceptions unless you are really sick (and I have no intention of skipping any classes as this is very important to me and I'm highly motivated.) And then 3 hours had come and gone already!

My homework for the day was math, and lots and lots of math, all kinds of it. And a calculator is not allowed.....just the way I like it. I'm actually better at it then spelling, and made a lot less mistakes, except 1 entire column where I kept forgetting to add the same thing over and over.....but that's just sloppyness and/or not having done those kind of calculations since 2007 when I left my job as a sales employee (and even there rarely). So I spent a good 2 hours doing my homework and then I just kept it up till the kids came home.

Next day, again school from 9-12 but in a different city and one that is known for it's traffic jams so I though, let's leave 15 minutes earlier then yesterday. And what do you know it, no traffic jams what so ever on my route. I arrived more then an hour before class, I arrived so early the building the class would be in wasn't even opened yet. Jay. When it did open I just took a desk in the lobby, grabbed my homework and starting checking everything with a calculator. The teacher arrived 15 minutes before the class started, and then I took another 3 hours of math tests just to complete the book and to make sure it all stuck in my head. Homework for next week is the first chapter of the Word 2010 book (I have the 2013 version at home) and to put the roster she gave me into my online agenda so I know what to train for and what homework to make and when my tests are. Though what I've done now in 2 days isn't actually covered till 3 months into the course......good reasoning behind that from the teacher. Better see how good I can spell and do math now, then wait 3 months at which point we can't cortrect it anymore. So, 2 mornings a week till the first week of June, and then 1 morning a week till November, and a 6 week holiday in the summer time.

I'm well motivated and I'll setle into a routine quick enough I think. If for some reason I can't study during the day I'll just take a set at the kitchen table with a cup of tea in the evening and work till it is finished. If I need to practice things on the PC I can do that too, but it's rather cluttered here atm so better get that sorted before next week to create a better working environment.

First Aid class is going pretty fast too, we have almost finished the book, we have a week off next week, and after that we will just practice, practice and practice some more till it's time for the test. We have been asked, if we get our diploma's, to help with a big training excercise a few weeks after our graduation. If I got the geste correctly it would be a simulated explosion/fire at the local church so a bit of everything. casualty wise.

Tuesday is a bit manic though, morning class, get home asap and take over the kids from Kim, and then First Aid in the evening and I've declared wednesday to be a resting and reading (and Blogging) day.

Final note before I start on the hobby stuff is that I've placed my updated resume on job sites and I've received 3 emails this week. 2 are a bit of a joke as they are in Ireland and in the Czech Republic, and my resume clearly reads that I'm willing to travel to work no more then 1 hour / 50 km. My knee just can't take much more then that, especially in traffic jams with continuous use of the clutch. But the 3rd one is a for a job at a printers for commercial support staff near Eindhoven Airport (a good 20 minutes from here (45-60 during rush hour) and I have a meet and greet this friday afternoon. I'm not expecting much of it, I mean I just started my training, but it will be a good excercise in promoting myself and maybe making an new contact for the future.

I helped a few friends by reposting their sales posts in the appropriate groups that I'm a member off and both managed to sell everything that same evening. I'm happy, they are happy, and I score some more Brownie points. I sold a couple of kits this week, and some Warhammer stuff, nothing major, and decided to put all the Italians I gathered up sofar up for sale in on big bundle. If anyone is interested, 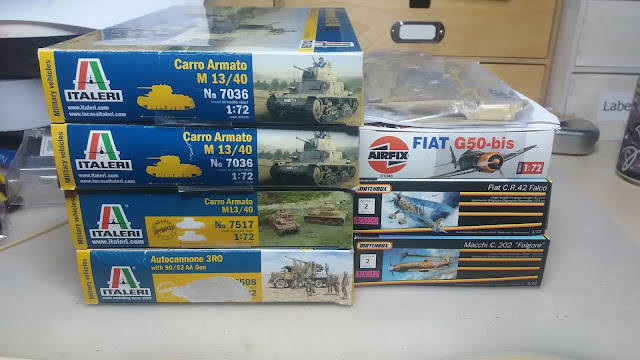 They are going because with Erik focussing on the Germans I really should focus all of my efforts on the British, and the Italians, while interesting, just don't seem to capture my imagination so much. So they can go.

Other then that, not much has happend here, but I'm delighted Piers posted a pic from the new Tobruk book.... 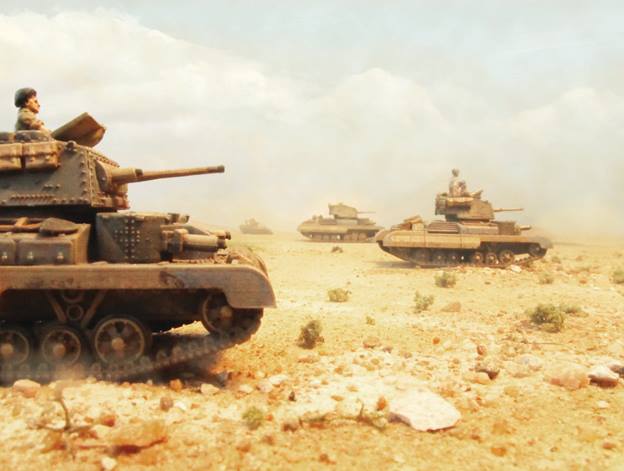 Discussion is ongoing for a release date for our first non-WW2 release - Battlegroup NORTHAG.

Earlier, PSC posted their planned release schedule for 2017 and onwards.

In the Pipeline
Of the up and coming releases, the Valentines and  A10 Cruiser are on my wanted list. A 20mm Fastbuild T-55 would be nice but doubtful as the market is flooded with cheap Die casts (which I hate and refuse to use). Of the future releases, I'm looking forward to the Stuart M3, Lee/Grant and the Su-76. The Carrier conversion kit  sounds nice but I have no idea when they would release that and I feel my first 2 sections would/should be done before that.

Now a final note before I take some much needed R&R, I've managed to find every single box of Epic that I have and I will be putting that up for sale soon. I had planned to in vest it in Wikkywok buildings and AB troops but lately my PC has been freezing up almost every evening as it just can't keep up with my use.....so I might have to reserve funds so to that sorted first....