Between a rock and a even bigger rock. And some paint.

First up, a collection of Playmobil rocks

Seller took over a week to reply and baffled me by asking half the amount I was willing to pay for it, and even included free shipping. But when they arrived I noticed half of them won't stay upright on their own so they will need bases and some filler, so I put these in the to do pile. Still happy with them though.

Kim sent me out to get a gift for her nephew, something I needed to pick up at the local Action (a chain of discount stores, they sell Matt Black spraypaint for 2 or 3 euro a can, great for scenery). 15 minutes later, no toy (sold out) but did pick up this set for 80 cents.

One half will be for my future 20mm mosque, the other 1 and a half bit will be come planets for space games. I might even pick up some more, these are less then half price what the hobby store asks for them.

Picked up these 2 from a seller at the LAF, really nice bits for my Inquisimunda box. When I chucked them in I spotted another cherub with book, oops!

I was waiting for these. A new varnish to try out, a new bottle of Pale Sand that I use for drybrushing my dirt bases as the old one was really spent, a red primer to try out, and plenty of Ammo stuff. I'll be using the green slimes on rocks, buildings and the fountains, looking forward to that. I will play a bit with the rusts too.

Other then work on the sci-fi junk I only based up 6 rats that I got off some Skaven sprues I got for free a while back. Sure, they are not giant rats, but good enough for me, and free.

Mouldine cleaning, sand on the base and a quick paintjob. Can't remember ever painting rats though, will have to look into that.

Slow progress on the Inca temple base, filled in the holes (needs a bit os fine sanding) and covered the hole with a plate so I can use still water effects to create a shallow pond (well, I'll paint it pretty dark, so maybe not that shallow).


Also made a few printouts of a Fallout 3 building that I want to copy for my foamboard try outs soon. I noticed a similarity between the Terrain Tutors foam building build tutorial here >
And this building: 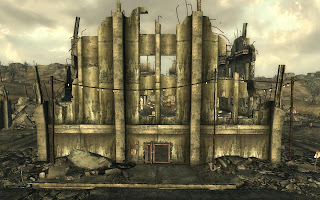 ...so I will use that as a reference to copy it as my first building for TNT.

I'll be darting between 28mm Sci-fi and 28mm Fantasy for a bit now. Get more games in. 20mm can come later, no worries.

Now, to score some more Space Marine bikes for scenery conversions and rust painting skill enhancement. Already traded some wolves for 2, and I just got offered 6 more so out come the bits boxes or in this case the promise of a scratch built building or 2 for free! (and thats enough, thank you, these will be for scatter scenery.)
Gepost door Gunbird op 22:59