I picked up these Forgeworld Sewer Entrances for 17 euros I believe at the local FB Wargamers market, unpainted, new in the bag (still counts as 2nd hand) back in March 2015. They look rather nice, with the hatches being numbered 1 till 6 in Roman numerals. They are long OOP like most of the good Forgeworld stuff. They are not all perfectly round as FW has a habit of taking things out of the mould too soon, but at first glance that is not very obvious. They do use a ton of releasing agent, mine were actually shiney from it. Several good scrubs managed to take that off. A bit more effort later removed all of the casting stalks too.

I based them on hexes as a the time I did not have suitable round bases and the hatches come with a circle of sculpted on crap that I did not want to remove. And a hex stands out to me like a round base does not. As these will be used as objectives or scenario specific encounter locations, I prefer it that way.

Originally these were painted with a mix of black metal and flat brown, but you can't see any of it after some stippling, washes and a bit of filter. After 2 coats of flat I went over them lightly with a pencil and rubbed it around a bit to get the current effect. A good healthy dose of tufts later and voila.

My idea beind these are the sewer hatches you see in Fallout 3, leading to underground areas. 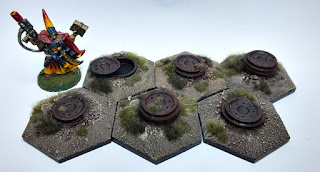 (Necromunda model for scale (not painted by me))

I'm rather happy with them and will come in handy for games of Zombies, Pulp, Necromunda, Inquisitor/Munda, Modern and Horror as well as being more then suitable for Mordheim.

Pity they are OOP.