Not something you are used of me, but next to wargaming I take great interest in our Dutch army (and our King...yes, I'm a Royalist), in particular the unit stationed at the Army base Oirschot, only a few miles from here. After years of neglect we are now in the position we can no longer train regularly with live ammunition due to costs after excessive cutbacks (like selling off ALL of our tanks....) <sigh> (Oddly enough I have 3 favorite units, 1 each from each of the branches of the armed forces. Navy - Anything named De Ruyter, Air Force - 322 Polly Grey Squadron and Army - 13th Light Brigade)

I modelled my 20mm Cold War army after a lot of pics taken there back then, and when there is a open Army day, once every 4 years I think it is, I make sure to visit (or do a wargames demo when I can). The 13th is currently transitioning from a Mechanised unit to a Motorised unit, and his Majesty came to inspect the troops and check up on the progress. 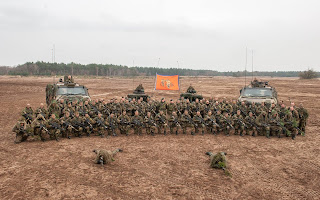 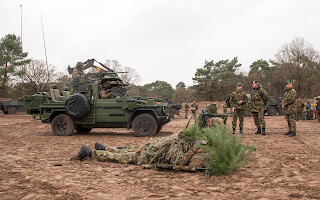 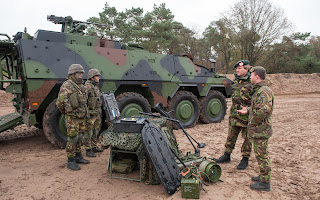 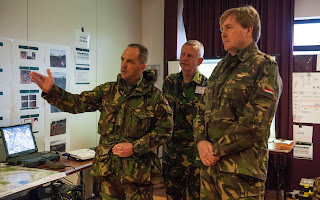 Now, while he is wearing a uniform he's no longer a soldier. He served, but after a 2013 change in our consitution members of the government cannot serve in our military at the same time, and he's head of the government. He has no rank, but a special Royal badge denoting his status. It's him on the right btw.

The Brigade "new style" falls in between the 11th Airmobile Brigade and the 43rd Mechanised Brigade, and being wheeled is faster and better able to respond in built up areas and over large distances. (and cheaper to run!) The CV90's will be replaced by Bushmasters, Mercedes Benz 280 CDI and a range of Boxers. They already have the Fennek and the Fuchs.

It will be interesting to see how these new changes will work out.
Gepost door Gunbird op 22:15