First game of Frostgrave without a mentor

Some errors were made during this battle. No egos were harmed. Lots of fun was had, and 2 more are enthusiastic about the game.

I brought almost my entire scenery collection tonight, plus a selection of miniatures, playsheets etc. All 3 of us had the book, but me, guiding the other two, was the only one using it. 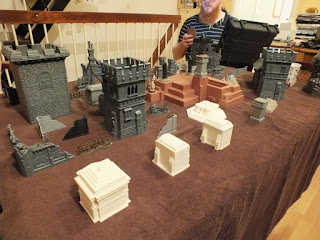 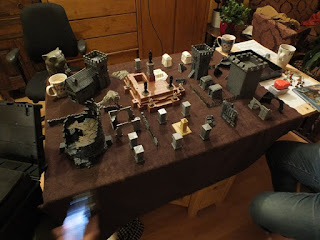 I created lots of cover points and managed to fill the enttire 120x80 table. The guys played a very tactical game, hiding as much as possible, and casting leap tons of times (too much in fact, they used it on each others teams too to drag the treasure carrier back from the edge. Great fun, but not allowed! Oops!) Also a great favorite of Henri was casting wall, I think he succesfully cast 4 or 5 of the things. 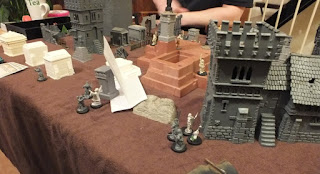 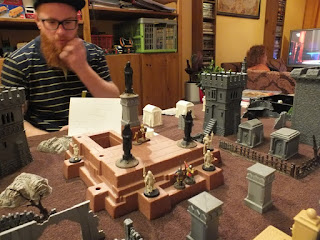 And it worked perfectly for him, screening his force from being attacked by Modhail. We used the variable game length mod and the treasure not off the table and in your hands - 50% chance you have it - mod. Also, no XP for wizards killing stuff. They did not really need it, Henri had in 7 turns 13 succesful castings and Modhail had 9. And not just on the easy spells either, even 14's to cast were on target. They did not go for kills either, purely to get the treasure and get out again asap.

Bringing the counter with troll poo cause an interesting result. Two turns in a row, they managed to activate a Snow Troll, each time at the exact same starting point. Some impressive shooting managed to kill one, and after some sacrificially cast Imps to delay the other he was blocked by a wall or 2. Other then that about half a dozen skeletons showed up. In the end, only 3 henchmen were killed (and 2 imps) and the game ended with 1 chest on the table in Henri's hands and the rest off table (3 for Modhail, 2 for Henri. Modhail had a great action, leaping one of his mercenaries to the top of the tower, grabbing the treasure in the next turn and then being leaped right back off the tower again. We laughed a lot at the results of some of the spells and their effects on our little men.

They both seriously enjoyed it. Henri is the most likely one to have an entire band painted within 2 weeks time, Modhail won't be too far behind finishing it this year I think. I've decided to focus on finishing as much scenery as possible before the years end, and then spend time on painting my warband. We'll meet up again in 2 weeks time, probably at my place so I want to have more finished.

Also nice, the local independent shopkeeper has decided to stock the Frostgrave rulebook and the mini's as well, so it looks like there will be some thursday night gaming in the future for me.  Another reason to have painted stuff, it attracts more people.

I'm nackered now. The guys played from 20:30 to 23:30, picking up the rules very quickly, correcting some mistakes we made soon enough and like I said before, really enjoyed ourselves. And that is the best thing.

This weekend - Saturday night is the new gaming night with my wife - boardgames, and maybe some painting sundaynight.