I survived a week of sunny Dutch weather, a couple of trips to the beach, and living in a small bungalow. I can check that off my bucket list :P Pity my knee started to act up thursday-ish (all that soft sand) and my depression decided it would be a good time to rear it's ugly head again. So instead of me cuddling the kids, the kids were cuddling daddy to cheer him up. Helped a bit, it did. All in all we had fun though, we learned a few lessons for next time, and took a lot of pictures :) 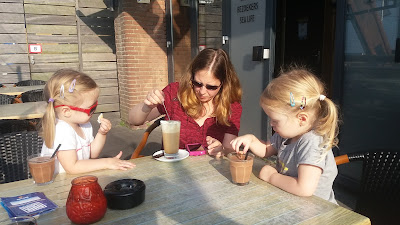 Us having a drink at the restaurant next to Sea Life in Scheveningen. The kids loved seeing all the fish and other aquatic animals. Sadly, they had locked the door behind us when we wanted to continue the tour (granted, it was 17:30) so the girls never got to see the penguins or complete their booklet with a stamp for the last part and a free sticker. (We went back to the entrance after this but this too was closed shut.....a shame).

In the evenings Kim and I chatted while she was making a puzzle and I managed to blow trough 1 Gig of data in a week, keeping up to date with the world and everything. Just couldn't log into most places as I don't keep codes in my phone :D Did manage to find a nice kit for a few euros to go with my P-51, and no shipping costs either as my brother picked it up for me on the way over for a visit. 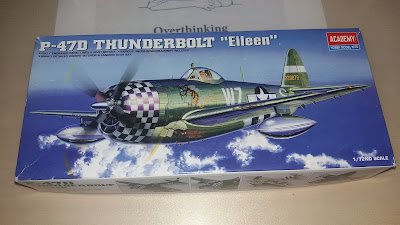 For a later date, but should be a fun build :)

I spent my evenings plus a afternoon on the beach reading this book, The Forgotten Battle. 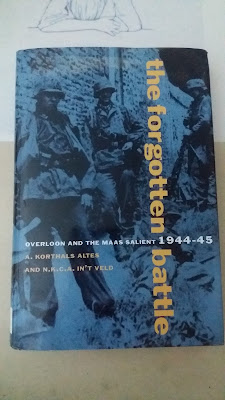 I've always been interested in reading up about the war affecting my birthplace, Deurne, but the few local books that I had never mentioned much other then the occasional crash of bombers, and then troops liberating Deurne, and then not much else. This book has changed that. I now know that Deurne was very lucky in that the front lines during Market Garden were very fluid and only solidified again after the Germans had retreated to the Peel area (Deurne lies on the Eastern edge of the Peel area). Also, it was interesting to read about the particular hardships suffered by both sides during one of the most miserbale weather imaginable. I know the Peel area quite well, so reading about tanks having to drive single file to get anywhere, and almost immediately bogging down when they got off the road, and the many, many close assaults with Flailtanks and the dreaded Shu mines and many, many other little details. To my surprise I learned The Americans and the Btits both took turns in defending the area, with the Americans being a lot less professional then the British. New to me was that especially the Allies stole everything they could get their hands on, and the destruction of quite a few landmarks like castles and windmills by extensive use of artillery and fighter bomber support. Mind you, the Germans did that too.

Someday, I hope to use this book and a few others to write some Battlegroup scenario's for it, maybe even a small linked campaign.

And now some serious news. I've been getting worked up over this meeting for a while, but today I got to plead my case to the UWV for referral (at their cost) to Werkmans, a agency that specializes in finding fitting jobs for highre IQ autistic people. After a mere 10 minutes (I guess my enthusiasm did it?) he said they would approve it, but they would need a proposal from Werkmans in 2 weeks starting now, and that they would only fund it for 6 months max (new government rules just in effect)
and all of it has to be started before my physical exam somewhere end of October/mid November. Tomorrow I have another meeting with my psychiatrist (whom I will tell I want no more medication) and after that I will email and phone Werkmans to get the ball rolling. The rest of the week is cleared and I will do more cleaning and selling of stuff and resting my knee cause right now it really, really hurts.