Slow and steady wins the race

Not always true but for once it works in my favour.

Cleared out a cabinet completely, and then used the space properly while cleaning my painting desk. Instead of layering from right to left I went for slices off the top....works the same :) 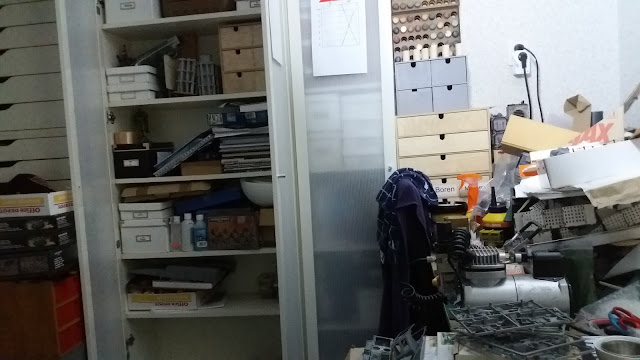 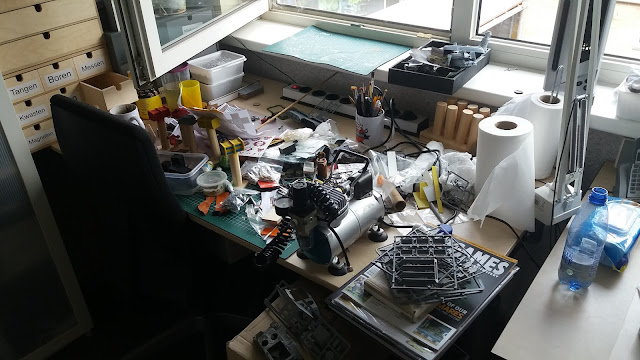 While clearning, I found a survivor from the great Dwarf cull of 2015, and he will make an excellent Knight for my Frostgrave band (when I can afford him, and paint him) 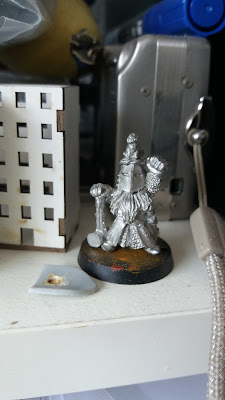 Plenty of stuff in the For Sale box now, so when I'm not cleaning of worrying my ass off I can list stuff to sell. Not that I need the money right now, it is always good to top off the Paypal account and get rid of unwanted stuff, but I have no things I want to buy right now (and I should not want that anyway).

Chris was kind enough to send me another care package from the UK with things I picked up in the past 2 months. I've gotten a lot more selective and curbed the ooh, shiney! bit for a part. Using cold hard logic on it really kills the joy of those purchases, everything I picked up in the last few months goes straight into projects (instead of starting a new one) 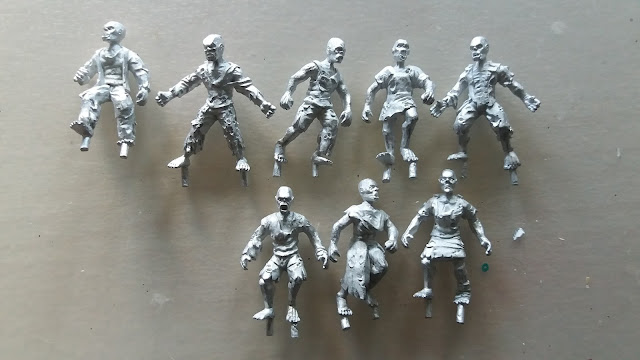 To be honest, I don't know who they are....but they looked to me like perfect Feral Ghouls for Fallout

Freebooter stuff normally has no interest for me, nor do limited edition models, but I felt she would make a nice wizard? Or Priestess?

This figure is huge, twice the size of a 28mm figure. But for some reaon it screamed Pulp and Big Trouble in Little China to me. Nice Japanese logo on shirt....things like that.

Father Christmas with a gasmask. Why not? I have a Brahmin without a trader so this should do it.

Destined to become statues, I think.

Will make a nice Witch or Possessed.

A old Cybork for the Inquisitorial Ork warband. He was just too cool to pass up.

I never liked the wardogs from the Withchunter warband from Mordheim so sold them ages ago. Managed to snag these at half price, and one will do duty as a Warhound for Frostgrave so I can retire the old wolf. 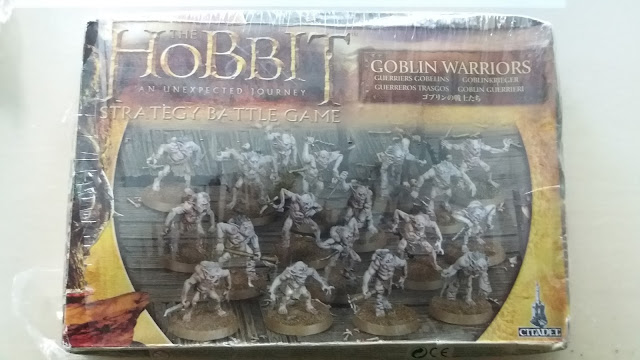 At half price, GW makes barely affordable decent-ish miniatures. I'll give some of them more modern weapons so they can double up as a TNT Mutants.

And that was it for this care package. Well, some stuff for Modhail was inlcuded, some Man'O War ships he had been looking for for ages. The one for Piers has been loaded with old GW paint now so I should send that out in a few weeks time.

Marktplaats has been quite hit and miss for the last few weeks. Plenty of winning bids, only to see the seller put them on Reserved because I got (I assume) outbid by people making a bid via email instead of public. Also quite a few people these days insisting on either pick up at their place or doubling up on shipping "for the time needed to pack and walk to the post office" which I think is a bit ridiculous as you should factor that in your sales price. But that's just me. 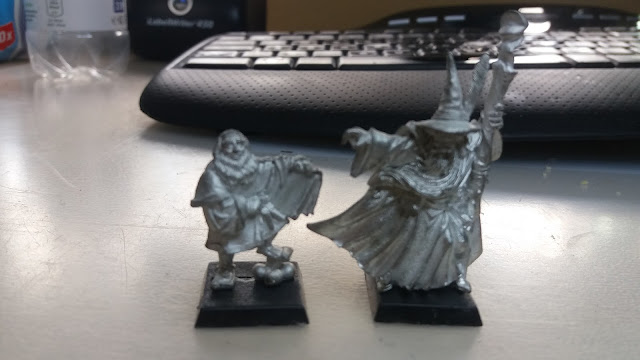 Leonardo (Warhammer) just cause I like the model and Nicodemus (Mordheim), to replace my old one that I cut off his hat ages ago.....young and stupid, I know.....

Also my Possessed warband is almost complete thx to finding these original Beastmen for 5 euros no less....the lot! 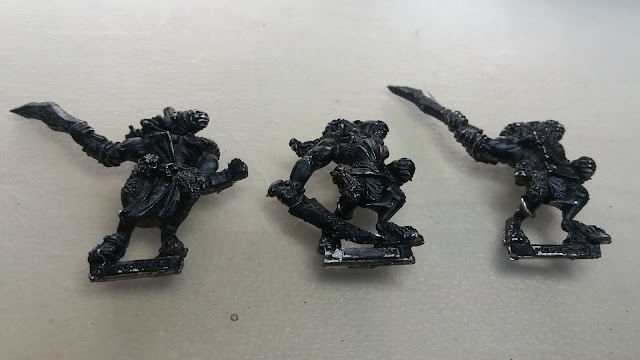 But I'm not focussing on buying more models, but on more storage.
Picked up these 2 Ikea Moppe storage drawers last week. 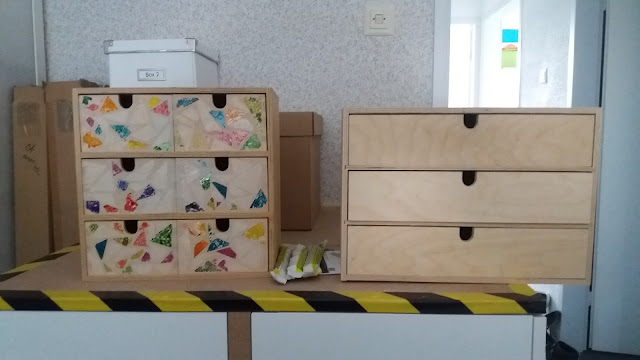 17,95-19,95 euros new at Ikea, the right one I picked up at Marktplaats for 5 euros (plus 7 euros shipping cause it was literally at the opposite end of the country), and I ran into the one on the left 1 day later at the goodwill shop for.....1,50 euro!. The front of that one was covered in glue and painted overhead projector sheeting.....In that pic I had managed to remove all the clear acetate, but the paint stuck on good. 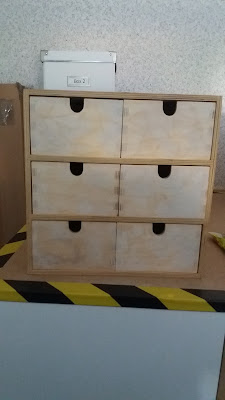 .....nothing a good 10 minutes with the belt sander could not fix!

I'll continue my search for these, as I'd like another one of the above with 6 drawers as they fit nicely into the Billy cabinets. I'm also looking for a bigger sized 6 drawer one to go with the one I have.....and that should be it. I've been eyeing the Hemnes steel cabinet on wheels to fit underneath my desk but sofar anything in my direct area sells for more then I'm willing to spend (30 euros new, so my limit is 10) or the more usual not replying.

And then I should have enough storage containers (for now). I am going to put up a shelf above the doorframe though.  Enough space there for another 6 Pappis boxes for the light weight scenery like woods, foamboard houses etc. I already have some second hand rails and shelf holders so no expense there. The shelving on the left side of my desk can wait.

Last purchase is something I've been aiming at for the last 6 months, i've even been looking on for it on Ebay.co.uk and Ebay.com, just cause I really, really want it for TNT. 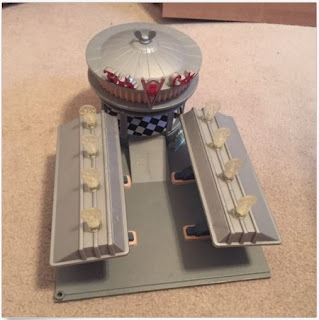 Problem is, they were never all that common here, and the ones on sale here tend to be the ones with a box, complete with cars etc, so sell for 40-50-60 euros or more. You hardly ever see a beat up one, and if you do you tend to get outbid anyway. But I finally scored thx to the....interesting.... listing of one seller. It was listed as just "cars" with no shipping listed and Pick Up only. It took him 5 days to reply to my bid matching his asking price of 10 euros, And 6 more emails back and forth before he agreed to give me his adress. I've arranged with a friend who passes by the sellers location on occasion to pick it up. I wasn't even allowed to transfer the money to the sellers account as he refused to give his details, as it wasn't "safe". Not sure having someone you've never seen before knock on your door at 8 in the evening would be described as "safe" either but to each his own. But finally! I'll be using it as just a deserted gas station btw.

Now, I'm still pretty nervous/skittish, but a bit less then last week so I'm getting more used to this, and when I do have it, it does not last as long as last week. I'm trying to stick to the same mantra this week: "If it does not get done today, there is always tomorrow" . Plenty of small jobs to do too around the house.