Nothing wrong with TNT. Loving it. With the help of my buddy Alex I even added a new scenic piece to my collection. He was kind enough to make a detour from his trip home to pick it up from a seller who refused to ship. And he just dropped it off. Didn't want anything for the help. Love that guy :) 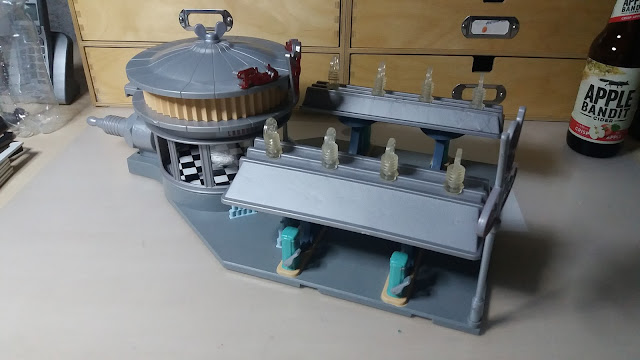 Flo's Diner from Cars. 12,50 euros. That's my filling station sorted in go, though I will do some dissasembling on it and rework it a bit to make it more fitting. Not now though, trailerpark first, this is for later.

3mm Ruins - going at it. Too much fun making them. But it does not have any priority so I just do a Block when I feel like it.

3mm Armies - what I need to do now is photograph all of the infantry models so I know what is in each bag, so future orders can be made accordingly. I'll be mixing the infantry you see. Also not a priority.

Rhino Wreck - intended to do just for fun, but can go back in the cabinet, as it is being replaced by something else.

Replaced by what? Well, this Blog is called 20mmandthensome for a reason. 20mm used to be my main focus, but it kinda dropped in priority as all the locals game in 28mm or in 15mm. In my relax time I've been reading up on the Battlegroup FB page, the Blitzkrieg book (as the rest is still packed up) and having small discussions with Piers. And in league with my new found enthusiasm, I realised I'm better off going back to my roots and paint what gave me so much joy, and that is 20mm. Don't worry, I'll alternate with the rest, but the time has come to dig up my 20mm stuff, do some small repairs, and start to finish units to a gameable standard.

How am I going to do that?

Back to basics. The core of each army is Infantry. The core of Battlegroup is 1 unit of Infantry, so that is what I will start painting. 1 German army for Early, Mid and Late War, tuned to the books that have been released sofar. I'll start off with Normandy (the Overlord book) as that Infantry Unit is 80% done, it is missing a 80mm mortar and a 3 man LMG team, plus some options from the Support Options. 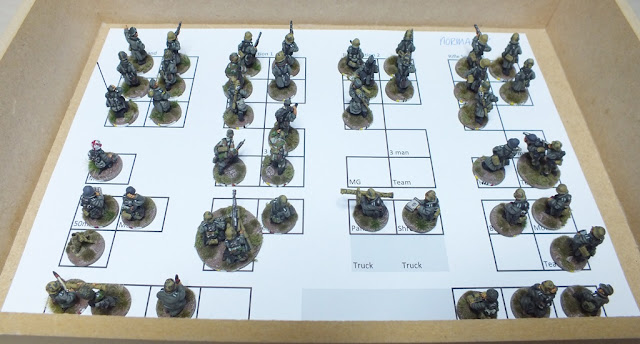 It feels like meeting an old friend I have not seen in years, and picking up where I left off. It feels good.
Gepost door Gunbird op 22:18