Modhail first brought up the idea of Battlefleet Gothic (BFG), oh I don't know, 1-2 months ago? He had started playing Battlefleet Gothic: Armada and his enthusiasm rubbed off. During packing everything up I had seen a large of cruiser hulls and a few escorts from my own fleet and the fleets I purchased off people who gave up the game almost 10 years ago. It took me some time, but I found the box in the stash. A box full of memories, I had always enjoyed BFG as I really like naval/space battle encounters, so I never got rid of mine.

The ships in the box are battered though. It contains 10 Imperial cruisers, in various states of disrepair, and 24 Chaos cruisers which seem to be in a slightly better condition. But only 1 light cruiser, a Dauntless, and a handful of Chaos and Imperial Escorts. Also some interesting cargo transport conversions made with bad metal recasts, which I will try to salvage and finish as fast as possible. But I felt some hunting for spares would be in order. But the sheer cost of it all....just have a look at Ebay and it will tell you these ships are not cheap! But I like a challenge.....

First, I found 4 Imperial Lunar cruisers at Impact's Bring and Buy. Original bases, basecoated black with 1 missing the ramspike and another just one antenna, they were a bargain so bought them without hesitation. The next 4, Imperials again, came when I was trading for a old 3D template and there were some cruisers in the background. We negotiated a very good deal, these 4 came in at half price of the ones at Impact. And from there the ball started to roll and pick up speed. I made request posts at various forums and FB groups and before you knew it, through trading, swapping and a little money, I ended up with this:

I'll spare you the numbers. This is a lot of ships. But it seems that when making the individual fleets everybody made the same choiches, so certain ships are very common. In a way I regret selling the BFG cruisers on the sprue 6 months ago, but they went for 10 pounds each and I would not be able to afford that now. To be honest, for most of what you see I paid a lot less then 10 pounds per ship. Most for a mere quarter of that. Odd, when you see fleets of 8 cruisers, 6 escorts and maybe 1 battleship go for 200 quid on EbayUK. With those kind of prices you are looking at over a 1000 quid of stuff in the drawers, which is mental. It pays to shop around or to call in favours from friends or plain old trades for stuff you no longer need.

Anyway, back to the basics. Erik would like to do a campaign, fair enough. I have not yet found the box with all of my counters and dice, but in one of the lots I traded was a large pile of blastmakers and fighter/bombers. The turn dial and markers I can just print off and laminate if needs be. Whether the campaign will be a game of 2 people remains to be seen, We've invited some friends that we played Gothic with when it first came out and I have a ton of spare ships now so they can use those as stand ins. What has been lost in the 4 moves since the game came out is my box with Celestial Phenomena. Planets, asteroids etc. Which is great as it lets me start over again with those. I particularly like the planets and moons that have half shadows so it is instantly clear what side is the sun side. Handy for your local Eldar and some special events. I still had some styrofoam balls that i picked up at the goodwill store just for space games, so I cut those in half (or 1/3rd in once case), sanded the undersides smooth and dabbed filler on the undersides and on the halves themselves (the underside cause it makes it harder and is easier to sand smooth the bad cuts I made). 1 smaller one had a hole in it so I decided that it would be a prime candidate for a cartered moon. Haven't chosen a scheme yet for any of them, just WIP's

I also picked the first 2 ships that I want to paint. They are, of course, the mainstay and workhorse of every fleet, 2 Lunar class cruisers. The Lord Baychimo is a standard Lunar (torpedo variant) while the Eurydice is a Nova Cannon armed ship. I've started to fill in her torpedo tubes.

Now what scheme to paint them, I am still clueless! I've got a few that tickle my fancy:

To end todays post, a pic of some bits of background material for the TNT table at Poldercon 2017. 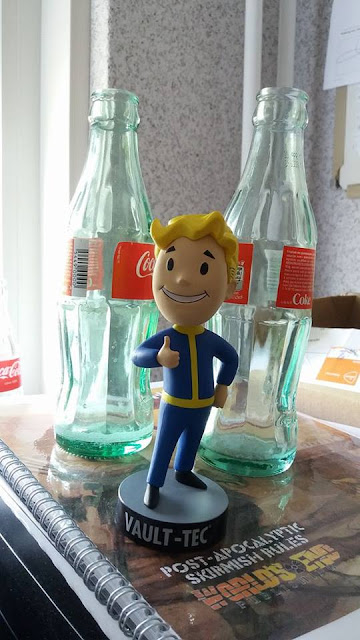 I (finally) picked up a Fallout 4 Bobblehead for a lot less then what they go for on Ebay and the 2 bottles I picked up from a local for free a few weeks ago. Those will be stripped of their labels and I will add new, weathered labels to then so they can stand on the table and look nice.
Gepost door Gunbird op 00:39