Well, the basic part of Block 1 is done now. 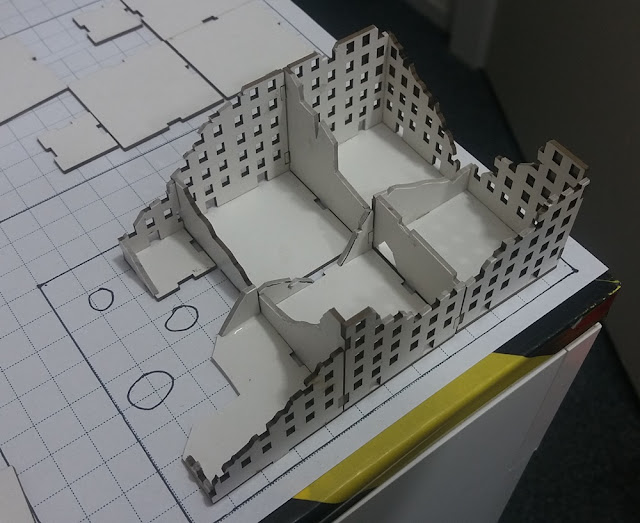 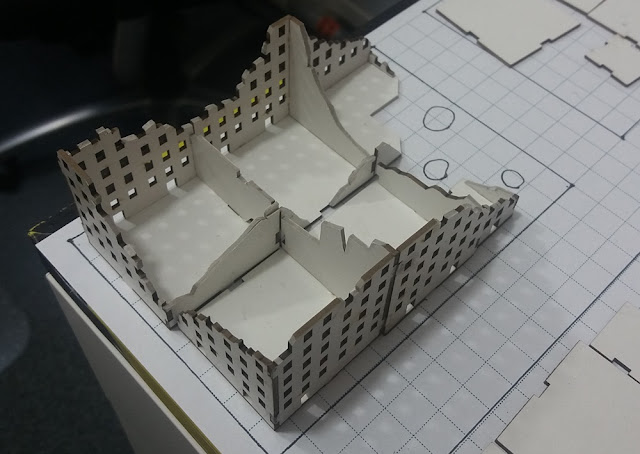 I might add some side supports on the inside, very thin ones, to improve the look a bit, but these are wargames buildings, not museum pieces. Besides, I need to be able to easily fit a 20mm square base in there if I need to.

Simple field test to see if my fingers can reach in there, and I have no problems doing so, so success.

I did see one thing while building them. Look at the following picture to see what I mean. 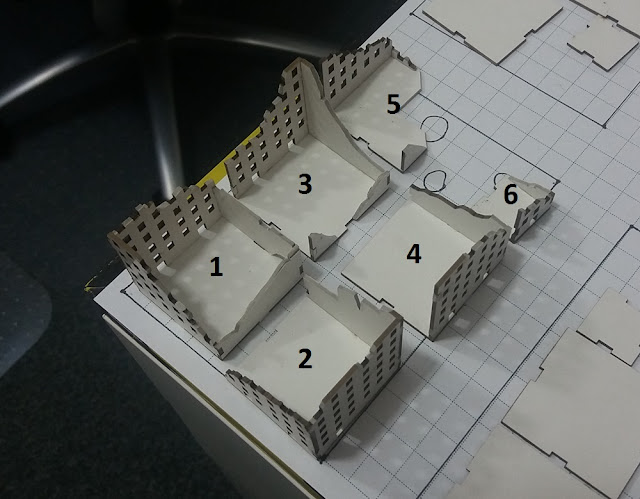 I noticed I can leave out walls because I will be glueing it all together to make solid blocks anyway, so I'm ending up with a lot more spare parts then anticipated, which in turn means more buildings. I just need to keep cutting down scrap cardboard to fill in the holes, but that is a 2 second job. I also noticed that the top parts that I cut off to trim the size of the building can be easily converted into shopwindows by trimming off the bit inbetween (not in this picture, just in my head right now). I did notice I'll end up short on corner pieces, so some of the blocks will have just blank walls facing the street....but I think I have a nice plan for that as well....we will see, some simple cuts here and there should transform the pieces anyway.

Just dandy really, it is coming along as planned, with some minor alterations to make, and the cardboard is pretty damn tough to cut which is good for the final strength. Patrick will cut bases to fit the various blocks next week or the week after, so I have to wait with glueing them toghether till then. Still, doing one or 2 blocks per evening should not be an impossible task, so in theory I could have them all made up by next weekend-ish.


With that sorted, a bit of a rant from me.

I go through my stuff on a regular basis to find stuff to sell to fund things like this. I take good pictures, properly describe it and ask a fair price (or so I hope). I've noticed a trend for a while now that people ask me "to cut them a deal on postage" which for most EU locations is 12-15 euros. In my kindness (and I really want that deal to put money in the bank) I take off 3-5 euros and make the offer. Only to have people agree with me there and then and then tell me straight away or a day later that they think that another 5-10 euros off or completely free shipping is more fair. I find myself getting more and more annoyed by people doing this over 10-20 euros worth of miniatures....are people just getting more greedy or what is going on here? Even tonight I had 2 people contact me over a lot of lasercut stuff worth 35 euros that I was asking 15 euro for just to get rid of it, only to have one chap make me an offer of 7,50 euros, and then contact me a few hours later saying that he made a shitty offer, and what was my REAL askingprice? When I told him I already had offered it to another chap including shipping, he kept asking me what price I was selling the lot for. When the other guy accepted the offer I told this chap it had sold, and told me that he would not make a higher offer. Which made me look puzzled, as he wasn't in the position to make an offer anyway! Also, I offered up a larger lot of Epic40K stuff on various FB groups that hadn't sold 3 months ago, although I had plenty of interested parties then. Again, some of the same interested parties from last time contacted me with offers that were much, much lower. These were the same persons I had given a previous deal including shipping, and not a single one of them had bothered to reply to that offer. Not even a simple No (common cuortesy seems to have died?). One of those persons was particularly brazen, made the lowest offer of them all, telling me he was being generous and this was the best offer I would get online, and that I had to include free shipping! When I pointed out that he had failed to reply the last time around and because of that I would not deal with him (well, that and the lowball bid), he replied annoyed and abusive. Fortunately for me, a couple of new interested parties did reply to offer including postage that I sent them, most with a request to think about it and one person who accepted the offer almost straight away, and even paid within the hour. I informed everybody else and that was it for me. Don't get me wrong, I offer stuff after checking prices from other sellers and ebay Sold listings, and I don't mind taking lower offers, but don't go telling me what I need to do. It just pisses me off and I will do no more business with you, period.

Maybe it is me and my Aspergers, but I try very hard to be sociable (while I'm not really that good at it), say "thank you" and "you are welcome" a lot, outside to cashiers and people I meet on the street, even online, and for some stupid reason I think normal people should respond the same way. Like this: 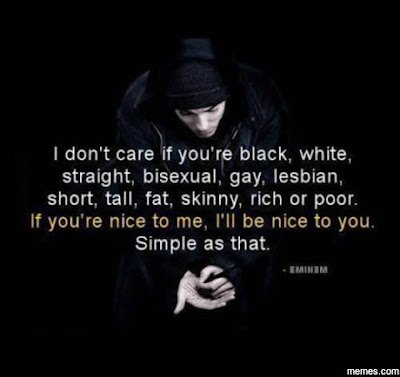 Sometimes it makes me wonder why people call me different or unsociable, while I think they should take a hard look in the mirror cause they are not exactly poster children of proper human interaction (if there even is such a thing as that....considering all the wars, terrorism and crime you'd think there are too many people with a few screws loose now a day).