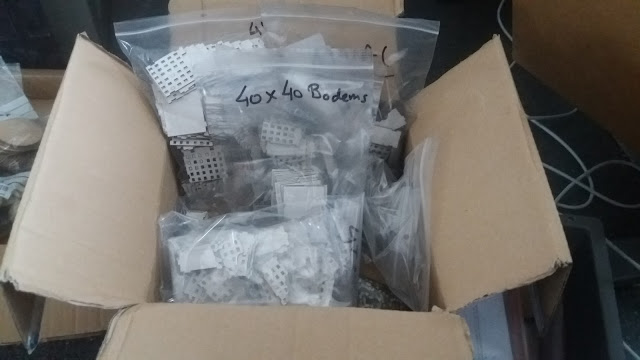 I grabbed the bag of bases and started fiddling about. In my head I have 2x2, 2x3 and 3x3 as base shapes, and I had been playing with paper cut outs, but now I have the real stuff, so after some quick sorting and printing off some sheets of graph paper, I ended up with the following which was more or less what I had in my head, with some additions: 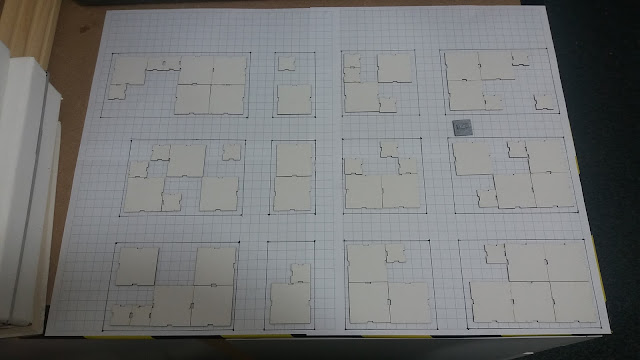 The grey speck is a 20x20mm base with a tank on it. Well, I always knew 3mm would not be as glamorous picture wise as 20mm, and 3mm will be a top down and close up shots for battlereports.  I have enough spare bases to make a 4th row of ruins, plus enough spare bits to make a 5th row of ruins, if I wanted to, but for now, I won't.  The bit above is 55cm x 35cm , but with what is left in the bags I have more than enough to cover half a square metre of table (my basic table is 80x80 cm) so I could do a complete cityfight on it. I'll make the buildings in such a manner that there is plenty of space to put the 20x20mm bases in, though some will be more extensively modelled then others. Bombcraters will be easy too, just some milliput surrounded by scatter. God I love 3mm scale, I can finally put all my dreams to reality without costing me another house in storage, another fortune and my marriage. When I say fortune, I mean it....the money I have spent on wargaming over a lifetime is scary! Fortunately, all this stuff cost me 32,50 euros and a book in trade, so total cost for half a square metre (and then some) in scenery is 45 euros. In 20mm that would buy me maybe 2 houses, in 28mm maybe a single farmhouse (unless I went MDF, then maybe a bit more).

What is the plan? Taking the above picture and gridpaper as a base, I will cut out, round off and sand down 12 bases and feg, there goes my plan. Just checked my stash and I  have only 1 sheet of 2mm plasticcard left, which is only sufficient for the bottom 2 rows, and there are no more local sellers of the stuff so this means back to the lasercutter. Which costs more money. Feg. (my buddy lasercutter is unavailable for the next 3 weeks and he's not the most accurate measuring wise so I won't risk that).

Not a problem. Cause Pat cut all of these with bases I can just assemble them ahead of time and glue them together in the correct shapes so they are ready when the blockbases arrive. See, problem solved. Pffeww.. now this won't happen again when I do the next part, the factories, so lesson learned.


Right, back to the normal routine of cleaning and clearing out all the stuff I don't need anymore from the hobbyroom and selling it. The income for this week alone has been phenomenal, more then a years budget in just 2 sales, but I've put most of it back into my bank account to make it greener as I have been skirting the thin red line and I want to stay out of debt. I have enough left over though for a small 3mm force though :)

Enough for today. Tomorrow, the world! :)