I'm still waking up full of energy, go to my room, clean, sort and well....be busy. Just finished the gaming table, using that right now as a packing and sorting table for all my stuff that I'm selling right now.


Also on there are the 5 boxes. Don't have anywhere else to put them untill I sort the cabinets. C'est la vie!

I've been listing stuff like crazy to raise funds for MDF scenery for Necromunda from Wargames Tournaments 30% off sale which runs untill Wednesday. 82.50 euro in 2 days time. Then it hit me what a utter crap idea it is. Will I do anything with it in the next 6 months? Most likely not. So it is a bit pointless, innit? I mean, I still have a stack of Frostgrave stuff to paint and that is a game I'm actually playing! More money in the Paypal bank is never a problem though, so that is ok.

Nice to know my brain still works like it should, if with a bit of a delay. I'm still very nervous, skittish and I'm looking forward to calming down a bit.

Next up is the painting table. 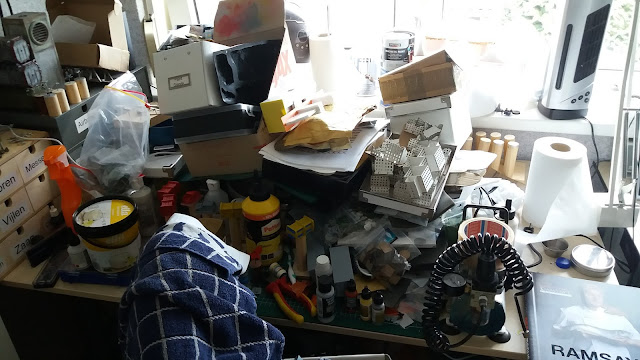 Looks like a lot, but considering I managed to clean the PC table, the floor and the gaming table in under a week I'm confident to engage the enemy and defeat him in battle :). Just draw lines and nibble away at the mess, from right to left :)

I've been outside now a couple of times, once even with the girls and I'm handling it ok-ish. It's very busy in my head, but I'm standing up straight and I'm smiling all the time so that is good. My brain chemistry should normalise in a month or so....or so they say. I'm not looking forward to the downward move, which I know is going to come, but I'm confident that with a clean room and plenty of time at the gym it will be a lot easier to ride out. Sure, there is always the worry the UWV will give bad news, but even if they do, we'll find a way to deal with that.

While cleaning, I found a few sheets of laminated planets and asteroids I had done up a few months ago, and I cut them all out (without casualties!), put them in the BFG drawer and called it a day.